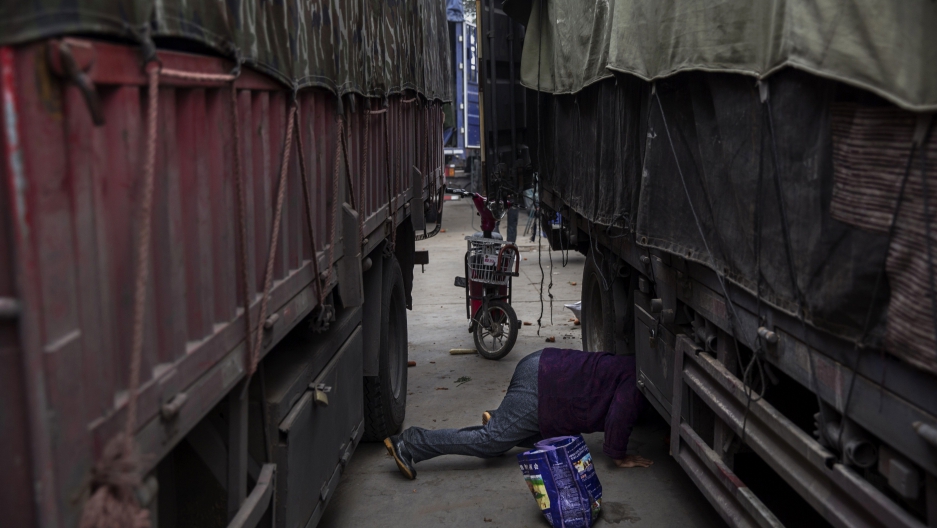 A poor elderly Chinese woman searches for vegetables that have fallen off a truck at a local market on September 26, 2014 in Beijing, China.
Credit: Kevin Frayer
Share

BOSTON, Mass. — Countess Albina du Boisrouvray has been a chameleon in the professional world.

A granddaughter of the late Bolivian industrialist and entrepreneur Simón Patiño, she started her career as a freelance journalist, founded a film company and then became chair and manager of a family real estate and hotel properties group. After the death of her only child, François-Xavier Bagnoud, a helicopter rescue pilot, Boisrouvray dedicated her life to eradicating extreme poverty — first working with AIDS orphans and then more broadly with vulnerable communities around the world.

Over the last 26 years, her international nonprofit FXB has honed an integrated health and human rights approach to reducing poverty that has been recognized by UNAIDS and UNICEF as a model effort. Through a 3-year, community-oriented program called FXBVillage, Boisrouvray has addressed the five drivers of extreme poverty — health care, housing, education, nutrition and business. And the model considers psychosocial counseling a component of its health care principle, which isn’t conventional in microfinance intervention, but one that Boisrouvray believes is crucial to sustainable success.

Since first implementing the FXBVillage model in 1990, FXB has lifted 81,000 children and adults out of poverty. On Monday, it released its extensive methodology in a toolkit that it hopes will encourage and enable governments and organizations to implement its ideas worldwide. The toolkit launch event featured a panel discussion with Nobel Prize-winning economist Amartya Sen, Harvard School of Public Health Dean Julio Frenk and other global and development experts. Afterwards, I sat down with Boisrouvray in a sunny Cambridge courtyard before she ran off to her next event.

GroundTruth: Over the last 26 years, what do you think has been the biggest struggle in your work?

Albina du Boisrouvray: Depends on where! In China the biggest struggle was to get mothers to understand that children had to go to school. When we showed them the benefits of being educated, and they got the basics of education that they needed to start their business, it enabled them to coax their children to go and get an education. That was what was going to give them a future.

In Latin America, there is a lot of migration because of the violence and civil war inside the continent. There is a lot of lack of trust between the participants often and you cannot get that community feeling. That’s why psychosocial counseling is so crucial. That’s why it’s important for the staff to work so closely with each community. They are the glue that brings them together.

GT: Have you thought about expanding to different countries from where you are now?

AB: We’ve been in eight countries and we’re still in six and we don’t want to expand that much more. Why don’t we want to expand? Because when you’re in one place and you expand in that place, the need is so huge and you want to cover that one place’s needs. But also you’re a resource. You remain a lifeline for the participants who have graduated who can come back to the staff and stay linked in. In fact, in Rwanda, we're in practically all the regions. We’d rather do that than to go to another country next door. But now with the toolkit, anybody can do it and get it started anywhere. We hope the countries we don’t cover, other people will cover.

AB: I met Jeff because he was running the Center for International Development. I thought he was brilliant. He spoke so well about poverty. He was such a great lobbyist and advocate. He spoke about the scourges of the AIDS epidemic and the need for medicines and so forth. I lobbied him a lot to be a spokesperson for the AIDS orphans. When he moved to Columbia University he came to work with us for a year.

He was exposed to, and went to bed with, all of our methodology and what we were doing. He started taking components of that but multiplying them. I was furious. I said, "Jeff, look. If you had come to us and asked how we were doing what we were doing, I would have gladly helped you." But he just multiplied it. With no consultants. Where’s the ownership? Where’s the attention to detail? Where’s the family culture?

GT: He essentially took your models and your ideas?

AB: He inspired himself with a lot of the components. I can’t say he took it because he did not replicate it exactly the way it was. I think he left out the psychosocial counseling completely. But he took this integrated approach idea, that you had to feed people, give them access to health care, give them access to school for the kids and so forth to develop the community, but as a huge village, not a network. It’s a pity. I think it’s not only money wasted and time wasted, but also his leadership wasted. He’s such an important player. He could have influenced the approach of integrated activities.

I don’t know what’s happened to the Millennium Villages. Have you heard about the results? Are they as successful? Have they made the same kind of impact? Do they have people making 10 to 15 dollars a day like it was being reported? I don’t know. But obviously if they’d been the solution to change the world, then it would have been taken on. I haven’t seen anybody take on the models of the Millennium Villages. There must be a reason.

GT: What are FXB’s plans after the expiration of the Millennium Development Goals this year?

AB: When the Millennium Development Goals came out, I was in the field in Rwanda. I remember the staff looked at each other and we thought, ‘We’ve already implemented, nine out of those 10 goals already’ — just by doing our program. The one we hadn’t implemented completely was the access to clean water. From then on, of course, we endeavored to correct that.

I hope that now, putting out this toolkit, this planning guide shows [that] 26 years of field-tested and scientifically proven success will be helpful for those sustainable development goals to push people to get money [for] programs that use that path. I went to several governments recently and had talks with people. I tried to convey that aid should be given in this integrated approach and to stop the silo aid that is given. It has to be in a different approach to the governmental thinking of the aid distribution to tackle [poverty].

GT: What are you most hopeful about with the continuation of FXB and this toolkit?

AB: To help. To really help policymakers have a different approach. To help individuals who want to start out, to do a smaller outreach but [to] do it in this integrated approach with the methodology and all it entails all packed in there in those 250 pages. I really want to help at the micro level and the macro level. That’s why we’re giving it out. Nobody gives out their program. But we’re giving out ours because we feel that the problem is huge.