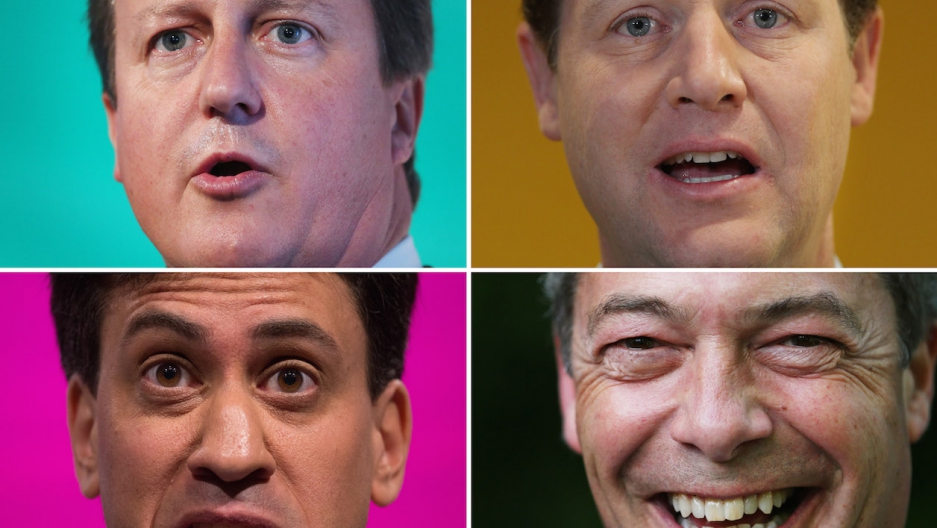 Polls are closed, and so is this live blog. Here comes the fun part

The people have cast their ballots. Now it's time for exit polls, talking heads, and elaborate graphics!

Follow GlobalPost's Corinne Purtill for the latest. (And, you know, watch the BBC and whatnot.)

One hour of voting left, which you could probably gather from the Labour Party's recent Facebook activity

Ed Miliband's Labour Party is making its last-minute pitch to voters on Facebook. It's not exactly subtle, and by the time people finish reading "25 reasons to vote Labour," the polls might be closed. Tactical error?

You've still got time to vote. If you're undecided, here are 25 reasons to go and vote Labour right now: -- 25 REASONS...

GlobalPost's London-based Senior Correspondent Corinne Purtill woke up today to an interesting email. It was a note from the Telegraph, a 114-year-old London daily newspaper, urging her to vote for David Cameron's Conservative Party in today's election. That might seem weird to Americans, but it's totally normal in the UK, where the press doesn't even pretend to be politically unbiased.

In the United States, newspapers are supposed to maintain at least the pretense of impartiality during an election. Sure, many allow themselves an editorial page endorsement as polling day draws near, but as far as overt stumping goes, that’s it (or at least, it should be). Not so across the Atlantic. British newspapers are much more explicit about the parties they support.

Read the rest of Corinne's story about the partisan leanings of the British press here.

2.5 hours of voting left. So here are some more #DogsAtPollingStations

Polls close at 10 p.m. local time in the UK. That means dogs will no longer be hanging around outside polling stations. Let's enjoy this while it lasts.

This will NOT be the final #DogsAPollingStations update.

Betty is 104, has seen 19 prime ministers in her lifetime, and isn't telling you how she voted.

She did give one hint, though. "I'm a liberal. My dad was a liberal."

Sadly, as with all gloriously inappropriate Wikipedia edits, it didn't last long.

If you're not British, you need to watch the Guardian's video guide to the election

It's four minutes long. Lots of information and plenty of LOLs.

Everything you need to know about the British general election

What's all the fuss? The election explained, for non-Brits

If young Brits were planning to skip out on voting and spend election day at home on their couches watching reruns of "Charmed," they're going to need to new plan.

E4, a popular TV channel that attracts nearly 9 million viewers between the ages of 16 and 34 every month, is shutting off between 7 a.m. and 7 p.m. so young people will go vote instead of actively ruining their minds and bodies by watching "Big Bang Theory."

Instead of seeing "How I Met Your Mother," viewers will find non-stop footage of "Darren," the man supposedly in charge of switching on E4, sitting in a control room and doing things like ordering pizza while pro-voting messages appear on-screen.

Will it work? Or will British millennials just take whatever E4 gives them for the day?

Nigeria cares more about the UK election than the UK does, according to Google

The British are voting. Who cares? No, seriously, that's not a rhetorical question. Who around the world cares?

Simon Rogers, Google's Data Editor, has your answer in the form of this map, which ranks countries by the "volume of normalized searches for the UK general election, from March-May, 2015."

Check out a bigger version here.

Thank you, internet. Thank you.

@innocent Macy May even popped into vote with her owner #DogsAtPollingStations pic.twitter.com/V2DtBqCX3i

This is why the UK election is close this time

The two-party system in the UK is over. It's done. It doesn't exist anymore. That said, one of the same two parties as always is likely to win: either the Conservative Party or the Labour Party. But no one knows which one, and that's because a handful of other parties are gaining in popularity, taking millions of votes away from the country's traditional rulers.

There is the Green Party. You can probably guess its agenda more or less. Then there's the United Kingdom Independence Party, which is like the US Tea Party in its isolationist tendencies. It's the far-right UKIP that has made the UK leaving the EU a major election issue. UKIP will get some seats but it probably won't get a majority. There is also the Liberal Democrats, which played a major role in the last election. And the Scottish National Party, which would rather not be so united to the kingdom, is expected to do well.

While it will likely either be Labour (the country's mainstream liberals) or the Conservatives (the country's mainstream conservatives) in the end, all the other parties are stealing millions of votes and making this one of the closest elections in British history. Their presence broadened the conversation during the campaign. It's a development many Americans would like to see in the United States as well. And it will mean that the two leading parties will need to compromise a lot more if it wants to pass any laws in the future.

Imagine a world where you could turn on the TV on election day and not be subject to an endless parade of pundits with nothing new to say. A world in which the media’s blowhard opining and meaningless speculation was forbidden by law — at least, until the polls closed.

UK law forbids reporting on campaigns while citizens are casting votes, to ensure that media coverage doesn’t affect the outcome.

From 6 a.m. to 10 p.m. Thursday, the BBC and the country’s other broadcasters will refrain from mentioning the election beyond indisputable facts, like the weather or a party leader’s visit to his or her polling place.

Anyone reporting an exit poll can face up to six months in prison or a 5,000 pound ($7,620) fine. Broadcasters go further, excusing themselves from reporting on any issue affected by the election. No economy, foreign policy, or crime. Basically, everything of substance.

Take last September’s Scottish independence referendum. As the rest of the world was glued to that vote, viewers in Britain were seeing features on beards and the Ice Bucket Challenge. Thursday won’t be much different.

But when the polls close? The blackout lifts, all bets are off, and the news channels throw themselves into wall-to-wall coverage that lasts until morning.

That’s when the BBC busts out the Swingometer, a vote tallying tool as familiar to Brits as John King’s intimate relationship with CNN’s Magic Wall is to Americans.

In the meantime — we'll tell you all we possibly can as election day rolls on.

Let's start this off right: It's legal to be drunk when voting in the UK

That's lucky because the British like to drink and this is going to be a long day. This is the tightest election the United Kingdom has held in decades. And the results actually matter. Depending on who wins, this election could push the world's fifth-largest economy closer to leaving the European Union.

It could also inspire a second attempt by Scotland to break away. The Scottish National Party is expected to do very well, potentially making it a kingmaker in the country they have spent a lifetime trying to break up.

In such a close election, the final hours of campaigning are important. But in the United Kingdom, the law forbids reporting on campaigns while citizens are casting votes (more on that below). The idea is to prevent easily manipulated media outlets from affecting the outcome. This rule, however, doesn't include social media platforms. So the candidates are out in force on Facebook, Twitter and elsewhere, bombarding the electorate with what they can in the final hours of the voting.

You can follow the insanity using #GE2015, which has nothing to with General Electric.