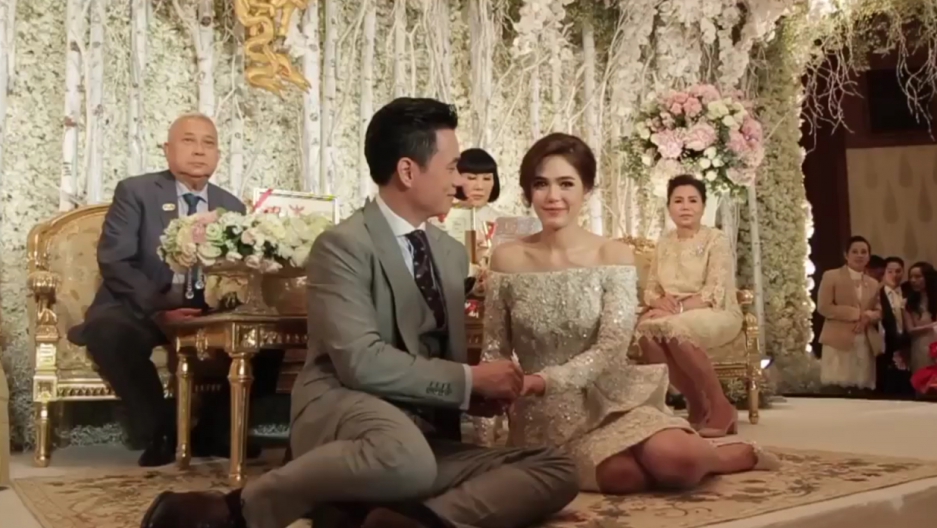 Oh, the things rich people do.

This morning in Thailand, a famous actress you've probably never heard of got engaged to an outrageously wealthy heir to a business fortune. People are so excited you'd think it was a royal birth or something.

When normal folks get engaged, they post it on Facebook. When fabulously rich and famous people get engaged in Thailand, they apparently do this:

Posted by BangkokPost on Wednesday, May 6, 2015

That event was the engagement ceremony for Thai soap opera star Arya A. Hargate, who's also known as "Chompoo," and Witsarut "Nott" Rungsisingpipat, her boyfriend of six years who, according to the Bangkok Post, is the heir to a business fortune.

Marrying a celebrity like Chompoo comes with a hefty price in Thailand.

Her beau paid a sin sod (a bride price, or dowry) estimated at 108 million baht — more than 3 million dollars. It included a property deed, cash, an eight-carat diamond ring and 14-carat diamond earrings. He rolled up with the decadent haul in a Mercedes motorcade. No word on whether all those Mercedes were part of the gift.

Now, of course, it's time for the dress.

Cambodia’s prime minister is refusing to pay a $5,000 bet he made on the Pacquiao fight