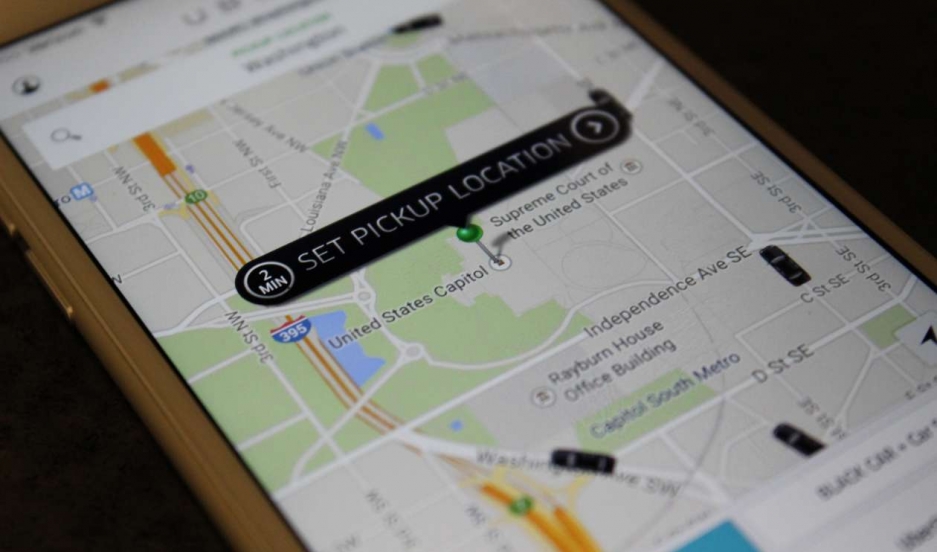 The Uber app displays cars available to make a pickup around Capitol Hill in May 2015. Documents show members of Congress, often critics of Uber, are among the car-service's best customers.

Sen. Al Franken has “serious concerns” about Uber’s commitment to riders’ privacy, for which company executives have, in his estimation, shown “troubling disregard.”

The on-demand car booking service, Franken further asserted in a letter to the company, has used customers’ information for “questionable purposes,” such as tracking the travels of journalists and businesspeople.

But despite these complaints, the Democrat from Minnesota is himself an Uber client, just like numerous other federal politicians who could help or harm the upstart tech firm’s business fortunes.

In all, some 275 federal politicians and political committees together spent more than $278,000 on at least 7,625 Uber rides during the 2013-2014 election cycle, a Center for Public Integrity analysis of campaign spending records indicates.

That’s a roughly 18-fold spending increase from the previous election cycle, when federal committees together spent about $15,000 on Uber services. It represents a veritable monopoly, too: Almost no political committee used Uber’s direct competitors, Lyft and Sidecar, according to the analysis, and traditional taxi use declined precipitously.

Bipartisan love of Uber abounds, with politicos of all stripes composing a de facto Uber caucus, voting with their money for a wildly popular but controversial company.

“Uber is the most safest, most reliable and convenient transportation option,” company spokeswoman Natalia Montalvo said when asked why politicians of all philosophical leanings are so readily embracing its services.

Uber itself has also become decidedly political of late.

Most notably, Uber has hired dozens of lobbyists and former political operatives — top President Barack Obama adviser David Plouffe among the latter — to plumb the pathways of power both in Washington, D.C., and most of the nation’s statehouses.

Much is at stake for the 6-year-old company: Its “ride share” services are still unsanctioned or even illegal in some communities, and Uber has at once aggressively sought governments’ approval to legally do business — while minimizing the kinds of strict operational rules and regulations that taxi and other ground transportation companies must often comply with.

Company officials, who regularly tout Uber as a way to reduce drunk driving and boost local economies, have also sought to calm political nerves following a jolt of bad publicity.

Uber drivers have been accused of and arrested for sexual and other assaults. In November, a top Uber executive threatened to publicize details about the personal life of a female news website editor who had publicly criticized Uber. The company has also caught heat for its use of “God view” — an interface that allows some employees to track the movements of its clients, politicians included.  Its chief executive, Travis Kalanick, devilishly told Vanity Fair in December that he’s “like fire and brimstone sometimes” when sparring with detractors.

At the federal level, Uber spent $200,000 last year on government lobbying efforts and has already spent $110,000 during this year’s first quarter, according to federal records. (Lyft, which didn’t return requests for comment, has spent $40,000 so far this year.)

Uber in 2015 has used one in-house and seven contract lobbyists to, in its own words, lobby on “issues related to expanded consumer choice and small business opportunities through app-based technology,” among other concerns. Several of them previously worked for members of Congress, according to OpenSecrets.org.

Meanwhile, Uber lobbyists advocate for the company in 45 out of the nation’s 50 statehouses, a Center for Public Integrity analysis of state lobbying registration records indicates.

Maine, New Jersey, New Mexico, South Dakota and Wyoming are the only states where Uber doesn’t appear to have formally registered lobbyists operating on its behalf.

This much is certain: Uber has indeed begun reshaping the way political candidates and campaign staff mobilize resources and move themselves around, said Matt McDonald, a partner at Washington, D.C.-based consulting firm Hamilton Place Strategies, which last year published a white paper about Uber and politicians that asserted, “The nature of oversight changes when someone is both regulator and consumer.”

And that, McDonald added, “is all for the better if you’re Uber.”

Take Franken, among the U.S. Senate’s most outspoken critics of Uber.

An aide readily acknowledged the company’s utility, both for his governmental and campaign offices.

“He still believes the company has not adequately answered his questions about some of its privacy practices and continues to have concerns about how its employees access, retain, and share customer data,” Franken spokesman Ed Shelleby said, while also noting that “no prohibition for services like Uber, formal or informal, exists in either office, and Sen. Franken himself has taken Uber."

And even the most ardent Uber supporters, such as Sen. Cory Booker, D-N.J., who mentions the company when lauding the “democratizing force of technology” and is sometimes personally courted by the company when traveling, today sound notes of caution when discussing it. No U.S. Senate campaign spent more money on Uber last cycle than that of Booker, which ran a $4,689 tab.

Booker “believes ride hailing services can provide good quality, competitively-priced, reliable transportation to customers but shouldn't be exempt from regulations that ensure consumer safety and privacy,” said spokeswoman Silvia Alvarez, adding that the senator and his staff use a variety of transportation options, “from taxis and Uber to New Jersey Transit, Amtrak and the subway.”

Some of Uber’s top users simply don’t want to discuss the company at all anymore.

The campaign committee of Rep. Gwen Moore, D-Wis., spent more on Uber services last election cycle — nearly $17,000 — than any other federal political committee. The committee reported 835 Uber transactions during 2013 and 2014, or more than one per day.

Moore personally takes Uber rides because she doesn’t have a car in Washington, D.C., and underwent two knee surgeries in 2013, her office told The Wall Street Journal last year, prior to some of the company’s PR flaps.

Moore’s office declined to comment on whether Moore is concerned about Uber’s privacy standards or business practices.

“This week, our focus has and will continue to be the federal budget and the reauthorization of the Export-Import Bank,” spokesman Eric Harris told the Center for Public Integrity.

Emily’s List, a political committee that advocates for Democratic women who support abortion rights, ranked No. 2 in spending — $12,675 — on Uber services during the 2013-2014 election cycle. Representatives there did not return requests for comment.

Politicians are certainly free to travel as they please, said Kansas state Rep. Scott Schwab, a Republican and chairman of the Kansas House Insurance Committee.

But Schwab, who backed a bill that aimed to impose tough safety and insurance regulations in Kansas on Uber and similar companies, says the company isn’t concerned about what’s best for the state’s residents.

Kansas Gov. Sam Brownback, a fellow Republican, vetoed the bill last month in the name of “an open and free marketplace.”

Uber's reaction? It announced minutes later it would end its services in Kansas.

Politics investigations in your inbox: Sign up for the Center for Public Integrity's Watchdog email.

“They don’t really want to see leaders govern or the will of the people prevail in making good policy,” Schwab said of Uber. “I have never seen any company operate like that … They just want to win like it is a knock-down, drag-out primary campaign.”

Back in Washington, D.C., Addis Gebreselassie, vice chairman of the Washington, D.C. Taxi Operators Association, likewise wants politicians to believe that Uber, for its talk of innovation and positive disruption, is more destructive than anything.

While taxi drivers in the nation’s capital are heavily regulated, from the fares they may charge to how they’re licensed and insured, Uber drivers are not, Gebreselassie argued.

He called on federal politicians, in the name of fairness, to stop using Uber. He also appealed to lawmakers’ safety, saying they’re putting themselves and their staffers at risk by taking rides from lightly regulated drivers who might be inexperienced, or worse, dangerous.

“We don’t want to see anyone get hurt,” Gebreselassie said. “But maybe they won’t see what’s happening here until a big accident happens.”

“How painful it is to be here in the United States, in Washington, D.C., and be treated like you’re in the Third World,” he said.

Perhaps it’s because hailing a car through Uber’s mobile app is more convenient, and less harried, than calling a cab.

Maybe members of the political class have endured one too many trips with a taxi driver who couldn’t follow directions, or wasn’t hygienic, or seemed more concerned with yakking on his cell phone than stopping at stop signs.

Whatever the reason, Uber doom-saying and Uber bashing isn’t much affecting the steady march of politicians toward its services, even if its top users appear more reluctant to wax effusive about the company.

Already this year, several dozen federal political campaigns and committees have reported taking trips through Uber, federal records show, even if the teeth of the 2016 election season remain months away. Taxi use is less common than Uber use so far this year.

The company has already run a variety of specials around elections and political gatherings — to new users, a free ride on Election Day, for example — and McDonald of Hamilton Place Strategies predicts the 2016 election could be rife with Uber innovation.

Think software that allows campaigns to book Uber rides for voters, gratis. Or loyalty programs that further sweeten the experience of Uber transport.

“To the extent that campaigns can use these tools to their advantage, they will,” he said. “For taxi services, maybe this is a situation where you want to change the fundamental quality of your product, because you can’t fake your way through this.”

Kalanick, the Uber chief executive, explained in a recent company blog post why the firm will continue to assert itself in the political arena.

“Our roots are technology, not politics, writing code and rolling out transportation systems,” Kalanick wrote. “The result is that not enough people here in America and around the world know our story, our mission, and the positive impact we’re having.”

He’ll have plenty of surrogates on the campaign trail.

Chief among them: Jim Messina, who ran Obama’s successful re-election campaign and has called Uber “one of the most innovative companies in America.”

Messina’s on Uber’s payroll as a consultant.

Alexander Cohen and Reity O’Brien contributed to this report

Copyright 2015 The Center for Public Integrity