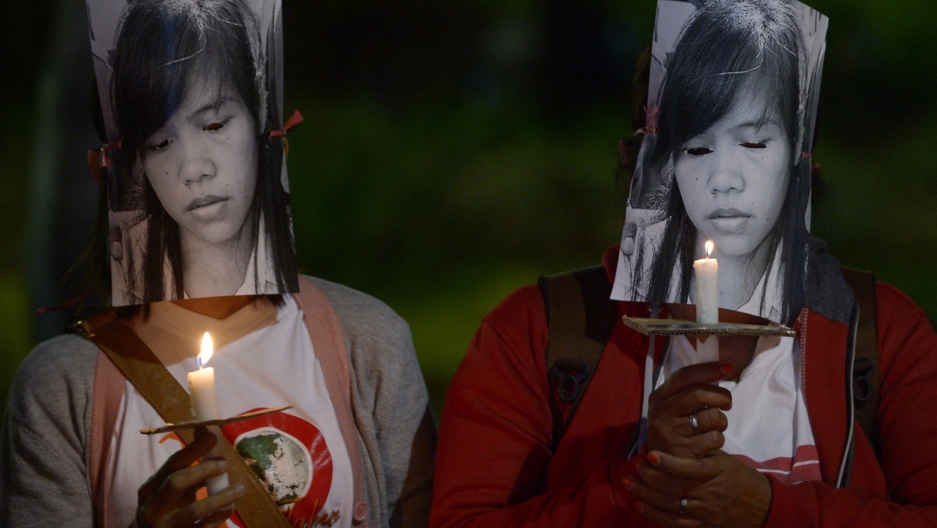 Indonesian migrant workers during a candle light vigil in Jakarta on April 26, 2015.
Share

After two of its citizens were executed in Saudi Arabia last month, the government has announced it will stop sending maids to 21 Middle Eastern countries. The ban, Manpower Minister Hanif Dhakiri said, will target countries that “fail to provide protection” to domestic workers. It will go into effect in three months.

The policy has been on the government’s agenda for a while. In February, Indonesian President Joko Widodo asked for a road map and a timeline to stop sending domestic workers abroad. “We must have pride and dignity,” he said at the time.

Both Indonesians beheaded in Saudi Arabia were maids. One was convicted of murdering a child in her care, the other of murdering her employer. Neither the embassy nor their families were given notice prior to the execution. About 40 other Indonesian maids face the death penalty in Saudi Arabia. Migrant Care, an Indonesian nongovernmental organization campaigning for migrant workers abroad, says most of the convicts acted in self-defense against extreme sexual or physical abuse.

Indonesia had already implemented a moratorium on sending additional maids to Saudi Arabia in 2011, after one was executed. But this time, the ban is expected to be permanent.

According to the authorities, some 6.5 million Indonesians work overseas, mainly as domestic workers in the Middle East, Hong Kong, Singapore and Malaysia. Cases of abuse, torture, starvation, and slavery-like work conditions are routine and well documented by human rights organizations.

Last year, the story of Erwiana Sulistyaningsih, a 23-year-old maid who came home in a wheelchair after having been tortured for months by her employers in Hong Kong, outraged Indonesians. The news of her case spread throughout the world.

But Migrant Care and other similar organizations have called the Indonesian plan unconstitutional and “discriminatory for women.”

“All Indonesian citizens have the right to seek decent work and it is the responsibility of the state to protect them no matter where they work,” Migrant Care Executive Director Anis Hidayah said after the plan was revealed.

Indonesia itself has recently executed foreigners, despite international outcry. Many have called the Indonesian double-standard on the death penalty an “extreme hypocrisy.”

But as United Nations chief Ban Ki-moon added his voice to calls for clemency for those on death row in the archipelago, Indonesia implied the attitude of the international community was just as hypocritical.

"We note the statement by the UN,” the foreign ministry’s spokesman Arrmanatha Nasir said. “But we also note that there was no similar statement made when recently two Indonesians were executed.”