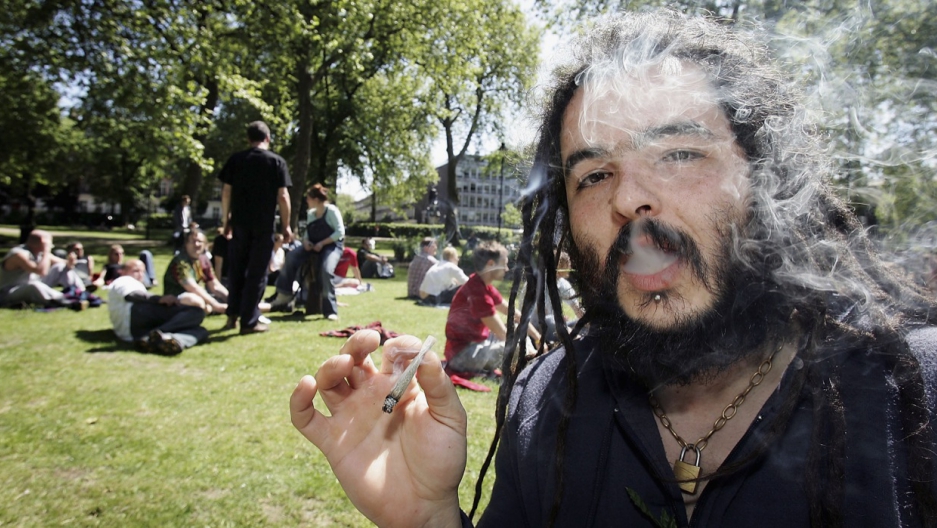 Smoking a joint in Russell Square before the start of a cannabis march in London.
Credit: Chris Jackson
Share

Conservative Prime Minister David Cameron is sometimes reminded he got caught smoking pot when he was a student at Eton — the country’s most elite private school — and was "gated" (grounded) for about a week. He now supports marijuana prohibition.

Labour leader Ed Miliband says he was too “square” to take drugs, but has read a lot about them, also leading to a prohibitionist stance. Yet when it comes to debating the issue, he shows he maybe hasn’t read enough.

During one recent televised debate, a young voter confronts and apparently schools Miliband over cannabis issues.

But this election is showing that British politics is no longer about two leaders. Many voters have abandoned the traditional parties for more radical alternatives, and the next government will likely be a coalition.

More from GlobalPost: The two-party system in the UK is gone

This shift could help break the war on drugs in Britain, one of the world’s biggest users. Almost a third of British adults now admit to having taken illicit drugs once in their life — catching up with the 48 percent of Americans who of have gotten high.

A new Cannabis Is Safer Than Alcohol Party has fielded 32 candidates.

Three parties that have a chance of sharing power — the Liberal Democrats, Greens and United Kingdom Independence Party — all want to decriminalize cannabis.

And the fast-growing Scottish National Party wants Scotland to choose its own drug policy — just like Colorado and Washington state chose theirs.

Adding to this mix, a new Cannabis Is Safer Than Alcohol Party (here's their manifesto) has fielded 32 candidates and even made a TV ad.

In these competitive times, other politicians will watch every vote the stoners get, and could look for ways to take their platform.

Many Conservative and Labour members of Parliament also break from their leaders.

In October, they spoke up in the most significant debate on drugs in UK’s Parliament in decades. A majority voted for a motion that the government review its drug laws and publish findings within a year.

A new coalition government forged with hard bargains could make this review happen. It would be easier for leaders to throw a bone on a drug policy review than on more contentious issues, like European Union membership.

Changing policy in Britain will have a knock-on effect on the global war on drugs. British agents have been involved in international drug cases, from Spain to Jamaica. Spending on more of those would be reviewed.

And in April 2016, the United Nations will hold a special session on global drug policy. There is growing call to change UN treaties that oblige signatories to clamp down on cannabis. How Brits vote on Thursday could affect how their nation votes then.