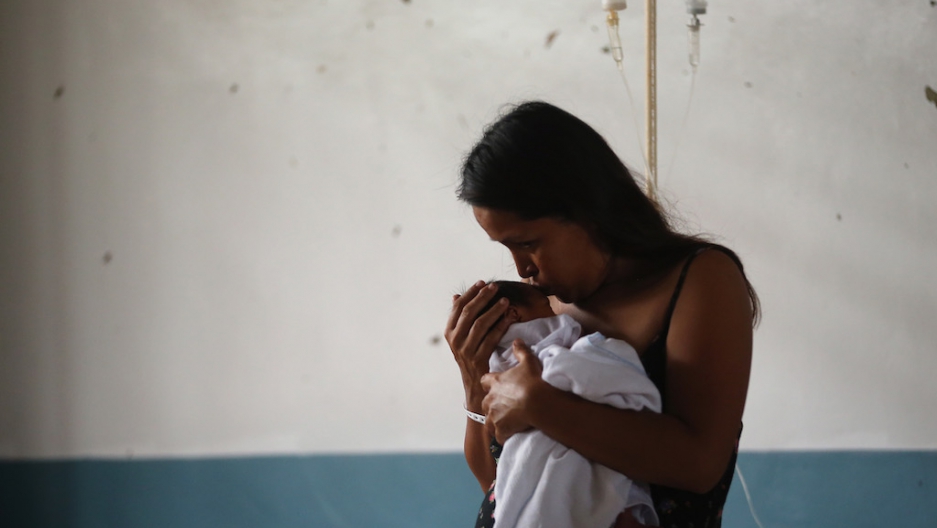 LEYTE, PHILIPPINES - NOVEMBER 20: A mother holds her newborn baby in the children's and maternity ward at the Eastern Visayas Medical Centre on November 20, 2013 in Leyte, Philippines.
Credit: Dan Kitwood
Share

BOSTON, Mass. — Nearly nine months ago, my husband and I threw our “go” bags into the trunk of our newly purchased Volvo, gave each other a quick kiss, and glided into downtown Boston early on a Saturday morning.

We had been waiting for this day for the nine months before it, and our easy commute belied the accoutrements of anxiety we had neatly (over)packed our bags: a change of clothes, toiletries, phone chargers, portable music player, camera, magazines, eye masks, receiving blanket, onesies and that new parent bible, What to Expect the First Year.

I was nervous, of course, about what would happen when we pulled up to Brigham & Women’s Hospital in downtown Boston. How painful would labor be? Would our baby be healthy?

But I wasn’t nervous about the kind of care I would receive. A seasoned doctor I’d previously met with from my OB/GYN’s office would run the show. A friendly nurse was always a buzzer away. I was confident that my baby would be well cared for in this Harvard University teaching hospital.

I knew, then, that my existence was shaped by the privilege and good circumstance of living in a country with one of the most advanced health care systems in the world. At the time, I had already spent a year reporting on barriers to child health care in Africa and Asia, and a subsequent fellowship examining maternal health care in Brazil.

What I did not know was that just farther down the northeast corridor, a mother heading to the hospital in our nation’s capital faced about the same risk as someone living in a less developed place, like El Salvador or Armenia.

A new report by the nonprofit Save the Children published this week finds that Washington, DC has the highest infant mortality rate among the 25 wealthiest capital cities around the world, above that for Prague, Warsaw and Tallinn.

Babies born to mothers in DC’s Ward 8, where more than half of the children are impoverished, are at particularly high risk of dying in the first 12 months of life.

Their mothers are at high risk, too; the US ranks 33 out of 179 countries for the “best place” to be a mom, according to Save the Children, with mothers facing a greater potential for death during pregnancy and childbirth than in any other developed country.

Nearly two years ago I sat down with then-USAID Administrator Rajiv Shah in a stale white-and-gray conference room in the agency’s headquarters in Washington to talk with him about a campaign he was leading to save children around the world. At the time of our meeting, nearly 7 million children were dying each year from preventable causes that we very well know how to treat, such as diarrhea and pneumonia.

“The United States has been first and foremost very proud to be the world’s largest supporter of child survival and maternal health efforts anywhere,” he told me. He was referring to US efforts in populous places like Nigeria, India and Pakistan, developing countries that lack basic health care for many of their most vulnerable citizens.

Indeed, these places need support. The US is the largest funder of global health work in the world. In 2013, India and Nigeria alone accounted for 35 percent of global under-five deaths.

“We have to start targeting the lowest 40 percent of income-based households in communities and countries, because that’s where children who get sick, die. That’s where mothers who are giving birth are more likely to suffer serious complications from pregnancy,” Shah told me.

But it didn’t occur to either of us to bring the US into the conversation as a country also in need of support.

On this, the first Mother’s Day where I’ll be the recipient of affection, I feel grateful. I also feel undeserving. The only thing that separates me from being a young mother in rural Nigeria or Ward 8 in DC is geography and the arbitrary luck that my mother is who she is — and that now, in turn, I am the mother I am to my son.

But that doesn’t mean I’m comfortable with it.

As a journalist whose primary focus is public health, it’s my job and duty to examine health disparities. I strive to speak with people who are in positions of power and those who are not in order to better understand the challenges to health equity and what is being done to close the gap between the advantaged and disadvantaged. I strive to share what I find with the world, and I strive to find out more.

It’s a small act, but it’s one that's working towards reducing disparities, and it's one that provides me a small measure of comfort when fairness and justice remain out of reach here and around the globe.

Marissa Miley reported on global child health for "Step by Step: The path to ending child mortality," a 2013 GlobalPost Special Report, and is currently leading an in-depth series on infectious disease preparedness for GroundTruth. Both projects have been made in partnership with the Kaiser Family Foundation.