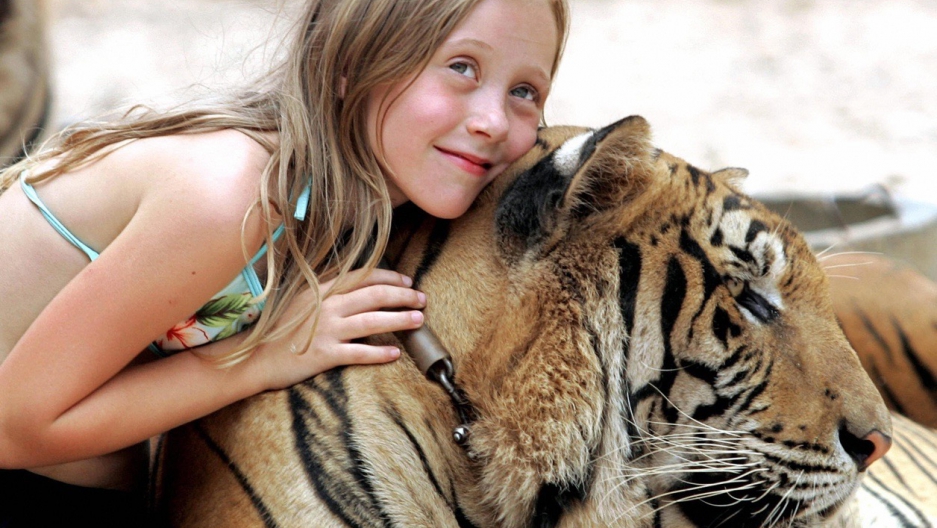 A tourist poses for a photo with a tiger at the so-called Tiger Conservation Center at a Buddhist temple in Thailand on July 23, 2005. Wildlife groups and the government are now trying to shut the center down.
Share

BANGKOK, Thailand — Tigers don’t like us. When humans approach, their raw instincts tell them to flee or claw our faces off. This is perhaps a wise reaction since our species has wiped out 97 percent of the world's tiger population in the last century.

But in Thailand’s western hills, there’s a place where nature’s code is inverted and tigers will tolerate wave after wave of unfamiliar humans.

Here, foreigners arrive by the busload to briefly enter a fantasy world where tigers resemble benign Disney characters instead of the apex flesh-eating predators they really are.

The tourists can stroke a tiger’s fur. They can canoodle with tigers in the dirt. They can bottle feed a tiger cub. They can even plop their child on the back of a massive tiger for the ultimate Facebook photo.

This place, overseen by monks in tangerine-colored robes, is one of Asia’s most scandalous temples. Called the “Tiger Temple,” it’s more of an extreme petting zoo than a holy site.

For more than a decade, its primary focus has been charging tourists up to $150 for a highly coveted experience: a cuddle session with a giant tiger. But now this unusual business may finally be winding down. In late April, Thailand’s wildlife authorities banned the monks from charging tourists to frolic with the endangered tigers.

Officials also declared that the temple’s 140-plus tigers — many bred on site — are now officially state property that can be seized at any time.

A raid on the temple by officers carrying assault rifles was initially resisted by monks. But the raid ultimately revealed a host of other rare animals kept without proper permits, including jackals, hornbills and bears. Authorities warn that just one more infraction may result in the tigers’ removal.

The temple, which dubiously promotes itself as a conservation facility, is actually registered as a commercial zoo. This is fitting for a place that, according to Care for the Wild International, can offer “no evidence” that the monks have “significantly contributed to tiger conservation in any way.”

That’s the consensus among every major conservation group that has looked into the temple.

“Placing tigers in tourists’ laps, walking them on leashes like a dog or cuddling with tiger cubs — all of these activities create the impression that wild animals, like tigers, are simply exotic pets to be used for tourist entertainment,” says Jan Schmidt-Burbach, a senior wildlife advisor with World Animal Protection. “Wild animals belong in the wild.”

Unfortunately, the Tiger Temple’s star attractions will never know life in the jungle. Though the temple claims releasing its tigers into the wild is the chief abbot’s “dream,” the monks concede “the tigers we currently have here have been hand-raised in captivity and lack the necessary skills to survive in the jungle.”

The reason some tigers can seem so docile around tourists, Schmidt-Burbach says, is because they are “forcefully separated at an early age from their mothers and often are forced into submission by cruel training so that they will obey their handlers and not cause injuries to people.”

In the selfie era, Thailand has become Asia’s go-to destination for tourists who crave photos with rare creatures. Beach towns are particularly overrun with men charging travelers to pose with sickly looking elephants or monkeys.

Exhibit A: Jay Z and Beyonce (and their infant daughter) posing with a bottle-fed baby tiger in Phuket, Thailand’s resort mecca.

Exhibit B: Rihanna, draped in a slow loris, a googly eyed and endangered primate.

Look who was talkin dirty to me! #Thailand #nightlife

Wildlife activists’ have long condemned this practice. For one, the animals are often forced to live in cramped urban settings that cause trauma and illness. But it persists. Thailand’s weak wildlife protections allow tourists to handle rare animals in a manner that’s often impossible (or illegal) in their home countries.

“We know that most people looking for a wild animal encounter want to do so because they love animals,” Schmidt-Burbach says. “They’re simply unaware of the cruelty that goes on behind the scenes.”

The demand for these encounters is so great that World Animal Protection publishes a travel guide for tourists who want to behold rare animals without contributing to their suffering.