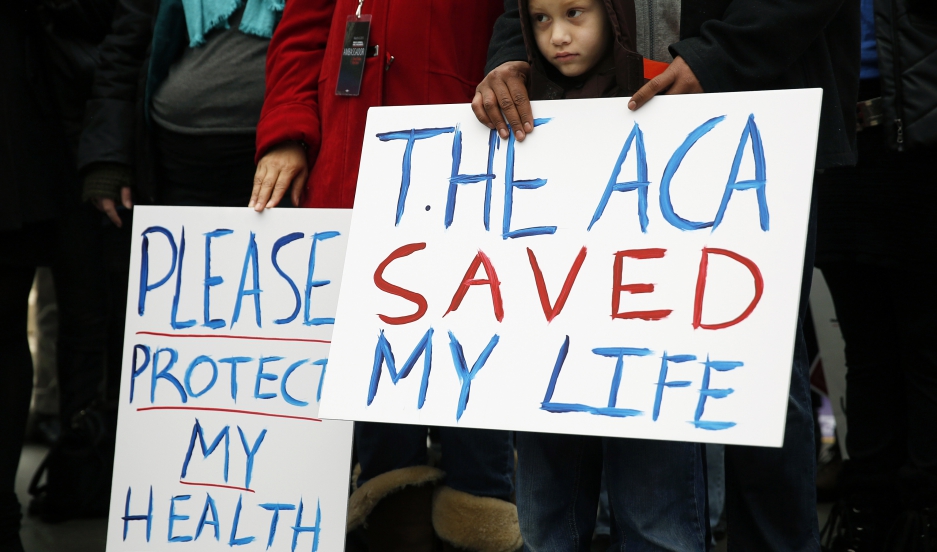 Jumaane Cook, 5, of Cleveland, Ohio demonstrates in favor of the Affordable Care Act in front of the Supreme Court in Washington March 4, 2015.

Women's health coverage is a centerpiece of President Barack Obama's Affordable Care Act. He campaigned on the issue in 2012 and continued to champion the cause throughout his second term.

Under the ACA, insurance companies are supposed to provide free contraception, have free contraception coverage and offer free preventative care for services like mammograms, in addition to free prenatal care and general maternity care.

But for women to see real benefits from these ACA mandates, insurance companies have to follow the law. Three new studies have found that many insurance companies aren't providing those services or are charging women for coverage that's supposed to be free.

Karen Davenport, director of health policy at the National Women's Law Center, worked on these reports. She says her group looked at plans in 15 states covering more than 120 companies.

“In every state, there were violations of the law," she says. "In some case it was charging cost-sharing [fees] for services that should be free, and in other case is was not covering something at all.”

“Way up on the top of my list [of concerns] was a health plan that doesn’t cover maternity care for daughters who were on the policy,” says Davenport. “So if you are a 20-year-old woman on your parents’ policy and you become pregnant, your pregnancy wouldn’t be covered.”

Davenport and other researchers discovered this information by analyzing healthcare plan documents called certificates of coverage. Though women can appeal within their health insurance plan or go to the state insurance commissioner to file an appeal with the department of insurance if they feel a violation has occurred, Davenport says the state and federal governments also need to step up and do more from the onset.

“When the health plans apply to sell policies on the exchanges, at that point, in most states, the state reviews that application. And then the feds also, if they’re in the federally facilitated marketplace, need to sign off on that too,” says Davenport. “There’s really two levels of review in most states that these plans go through, but that’s clearly not doing the job.”

These problems could be more widespread — Davenport says the study was limited to just 15 states because no additional information from other localities was accessible.

“While we don’t see regional differences, I think that is more based on what we were able to get our hands on,” she says. “Because we saw so many problems with the policies that the plans are offering, it is safe to say that women in other states and with other health insurance companies could face the same problems.”

Health insurance companies that are found violating ACA mandates can be subject to fines, but Davenport says that instead of focusing on imposing penalties, lawmakers and health officials should be working to ensure that providers are offering solid medical coverage in the first place.

“Given the extent of these violations, they’re likely occurring all over the country,” she says. “We have worked with insurance companies themselves and with insurance commissioners in some states to get to work on fixing these problems. We’ve had some good successes.”

“Health plans provide access to care for millions of women each day and receive high marks in customer satisfaction surveys," she wrote in a statement. "To use highly selective anecdotes to draw sweeping conclusions about consumers’ coverage does nothing to improve the quality, accessibility, or affordability of health care for individuals and families."