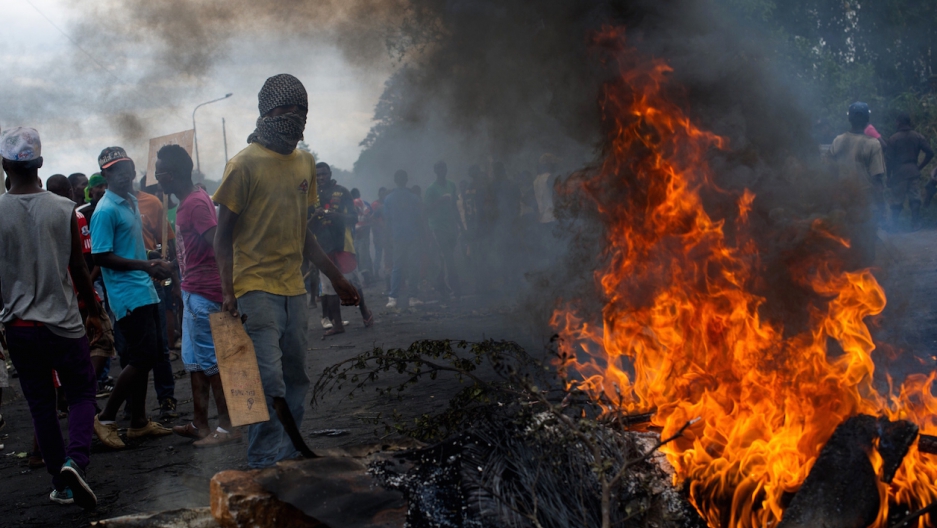 Protesters stand at a burning barricade in the Musaga neighborhood of Bujumbura, Burundi, on May 5, 2015.
Credit: Phil Moore
Share

JOHANNESBURG, South Africa — Rwanda has a crisis on its doorstep.

In neighboring Burundi, President Pierre Nkurunziza's decision to pursue a third term in office has led to street protests, a deadly police crackdown, and some 25,000 people fleeing over the Rwandan border.

After more than a week of unrest, the Rwandan foreign affairs minister on Tuesday appealed to Burundi's leaders "to do everything in their power to bring the country back to a peaceful situation."

But it is likely that Paul Kagame, the Rwandan president, is keeping a close eye on Burundi for another reason: the fate of his counterpart Nkurunziza.

Kagame's second seven-year term in office ends in 2017, and under Rwanda's constitution, he can't run again for the presidency. Despite this, there have long been rumblings that Kagame might try for a third term. While Kagame has been praised for economic growth and development in Rwanda, he is criticized for an increasingly despotic rule that’s included attacks on dissidents abroad.

Kagame has been coy on the third-term issue, stating last month that he’s “open to going or not going depending on the interest and future” of Rwanda.

In Burundi, as in Rwanda, a third term for Nkurunziza would violate the country's constitution. It also runs against the Arusha agreement, a peace deal brokered by Nelson Mandela that ended Burundi's civil war in 2005.

Nkurunziza and his allies claim he can try for a third term in presidential elections due June 26, because for his first term, he was appointed and not elected. On Tuesday, the constitutional court — whose vice president recently fled the country citing "death threats" — ruled that Nkurunziza is eligible to run again.

But the people of Burundi aren't buying it, and appear fed up with a leader trying to bend laws to keep himself in power.

Both Burundi and Rwanda have genocides in their recent pasts. More than 300,000 people died in the 12-year Burundian civil war, in fighting between the minority Tutsi-dominated army and predominately Hutu rebel groups. In the Rwandan genocide, in 1994, more than 800,000 Tutsis and moderate Hutus were killed by Hutu extremists in the space of a few months.

While the current political crisis in Burundi is about power, not ethnicity, there are concerns that in this fragile democracy the violence could escalate along ethnic lines.

In 2016, the presidents of Congo-Brazzaville and the Democratic Republic of Congo will also see the ends of their two terms.

If Nkurunziza is blocked from a third term in favor of a democratic transition, it will be a big step forward — for both Burundi and its neighbors.