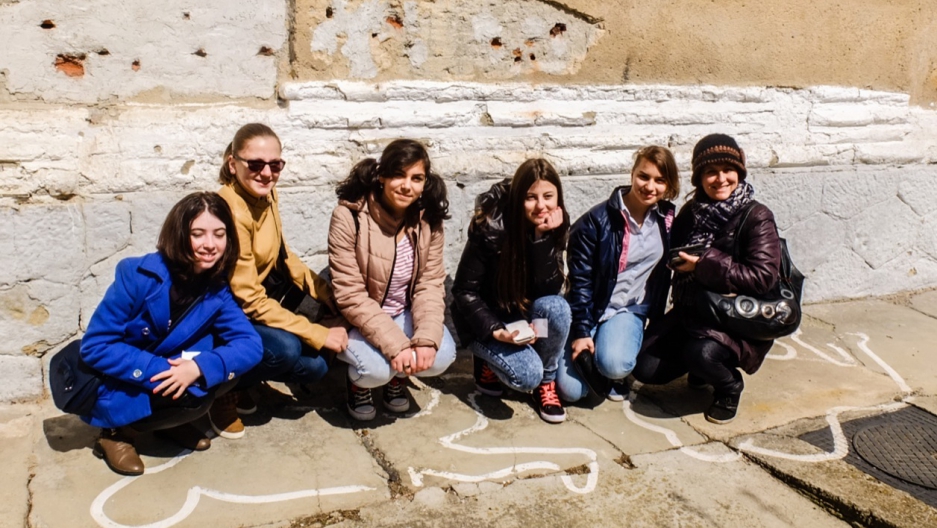 A group of students gather around the outlines of where the Ceausescus fell on Christmas Day 1989 at Targoviste Museum.
Credit: JC Laurence
Share

Granted, the blocks are a scar on a city once described as the “Paris of the East.”

But, 25 years after the execution of detested dictator Nicolae Ceausescu, these symbols of the country’s darkest times are acquiring a lighter aspect as the country finally experiences a much-awaited catharsis. Long the European Union’s most corrupt state, Romania is purging itself of the crooks who inherited the rotten power structure left after Ceausescu’s 1989 execution. The anti-corruption drive has netted businessmen, judges, mayors, lawmakers and, most prominently, former Prime Minister Adrian Nastase. Nobody is immune.

It could be described as the real revolution, “the biggest and quietest Romania has ever experienced,” says Doru Raduta, one of a new crop of guides offering communist-themed tours of the city. Another sign of the country’s psychological recovery?

Either way, after years of post-Soviet chaos, Romanians appear to be reclaiming their popular uprising of 1989. The revolution cost over a thousand lives, only to be hijacked by Ceausescu’s fellow communists in what amounted to a palace coup. Only now is there a sense of justice being done.

Up to now, the country had to make do with the rather sterile Memorial of Rebirth on Piata Revolutiei — a marble spire skewering what resembles a potato — to mark the bloody events. Nowadays the unpopular monument features a splotch of red paint under the potato, the work of an angry graffiti artist. The Memorial of Rebirth on Piata Revolutiei, aka the "potato of the revolution." A splotch of red paint was added by an angry graffiti artist.

Ceausescu remains omnipresent in this city, largely thanks to his People’s Palace, a sick title considering he starved his countrymen to build it. Tens of thousands of people were kicked out of their homes, their elegant 19th century houses razed to the ground to build this bland behemoth, so big you can apparently see it from space.

In apologetic tones, our official guide points out the skilled craftsmanship of the intricately woven carpets and the carved wooden doors. “People worked hard to make it beautiful, even after Ceausescu’s death,” she says, sounding only half-convinced.

Everything is gigantic. Thirty-five million cubic feet of marble. Three-and-a-half thousand tons of crystal. The figures blur into insignificance, the overall impression being that of a giant bathroom, albeit one with blingy chandeliers.

Incredible though it may seem, the palace now houses Romania’s parliament. This can hardly have been healthy for the collective psyche, not to mention the state budget — the lightbulbs alone must cost a fortune.

“What could we do,” laments the guide. “We were stuck with it.”

No monument could eclipse the palace, though it’s not for lack of trying. Raduta takes a sneaky back route to the palace roof. Just a stone’s throw from here, the biggest Orthodox cathedral in Eastern Europe is being built — with state money. In Romania the biggest Orthodox cathedral in Eastern Europe is being built with state money.

The plan is that the church will tower over the palace — God dwarfing the Devil. “Megalomania runs deep in our blood,” says Raduta, dryly.

After years of suppression under Ceausescu, religion is undergoing a grand revival in Romania, with 10 new churches completed every month. It’s a sore point in a cash-strapped nation that desperately needs more schools and hospitals.

Romania’s treatment of its vulnerable citizens remains a moot point, years after shocking images of bone-thin orphans were beamed into the world’s living rooms in the late ’80s. These neglected and abused souls were considered by many the victims of Ceausescu’s abortion ban. More children, more labor, went the thinking. Tens of thousands of impoverished families ended up leaving their children in bleak state orphanages.

Today, a community of some 2,000 orphans, adults and children, are living in the sewers beneath the Gara de Nord, living testimony of the system’s continued dysfunction. Raduta receives so many questions on the subject that he recruited former sewer-dweller Sergiu Bogdan as a guide to tell the story himself.

Bodgan arrived in Bucharest at 16. Eventually he found himself in the sewers, though he could never stay underground for longer than three days at a time. The tunnels, which carry boiling water to the old communist blocks, were suffocatingly hot, he says.

For a few years, he was addicted to sniffing Aurolac paint. Even now, he’s wary of telling people about his past. Friends have turned their back on him after finding out. “Okay, I had a bad life before. But, it’s like you have a black stamp. Society doesn’t give you a chance,” he says. Sergiu Bogdan has been recruited as a tour guide to tell the story of Bucharest's orphaned street children. He arrived in the city at 16, ending up in the sewers.

It was only after stumbling across local charity Parada that he started to get his life together. “You grow, you fall, you grow, you fall. It takes a while to get to a constant level,” he says. Part of the proceeds from the so-called Outcast Tour will go back to the charity, which works with orphans.

At Vacaresti Lake, nature is healing the wounds of the past. The artificial lake, another of Ceausescu’s grand projects, was never completed. Left to the wind and the birds, the crater was transformed into a wetland haven, rich in flora and fauna. Interest grew after a write-up in National Geographic a few years ago.

Lucian Dumitrescu, a retired light engineer, is fishing among the bulrushes. “It was a good place when nobody knew about it,” he grumbles, opening a plastic bag to show his meager catch. He claims to have spotted a pair of rogues with a cart and horse digging up copper pipes left by the 19th century houses that once stood here. Sure enough, there’s a massive scar running through the long grass.

In recent times, Romania has added a new attraction to this dark tourist trail: the military barracks in Targoviste, where the dictator and his wife were shot on Dec. 25, 1989. Now converted into a museum, you can see their plates, their beds and the tiny room where their trial was conducted. There’s a video on YouTube, a pathetic spectacle of denial in the face of the inevitable.

Out in the yard, a group of schoolkids poses for a photo next to the outlines of where the evil pair fell. Chattering and giggling, some get their phones out and pose for selfies. It’s all a bit surreal.

“Even if they were hated, we shouldn’t have executed them, especially not on Christmas Day,” says Dana, the museum’s guide, echoing a widespread sentiment in Romania.

“Despite my anger, I kind of pity them. They were two old people who'd lost all sense of reality.”