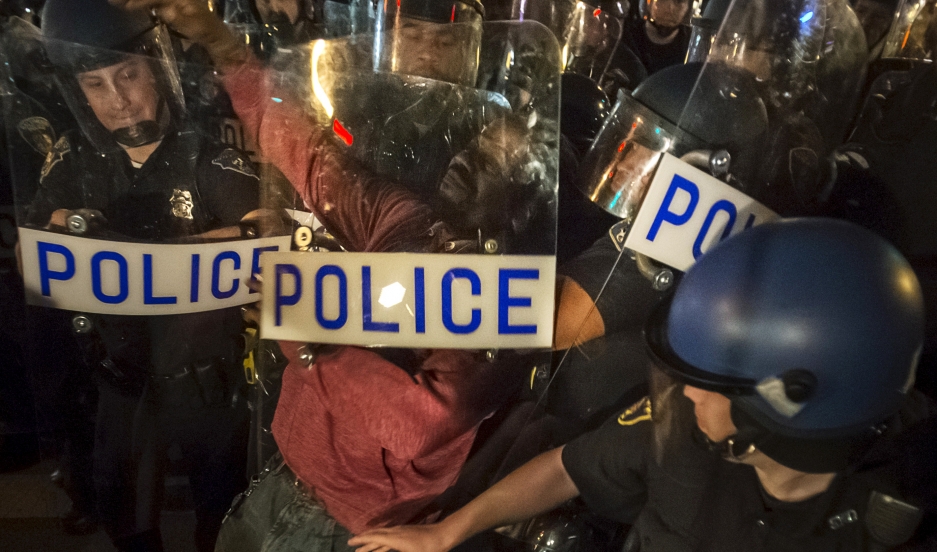 A man, protesting the death of Freddie Gray, is detained by police after defying a curfew in Baltimore, Maryland April 30, 2015.

I was elated when Marilyn J. Mosby, the state’s attorney for Baltimore, provided details of the killing of Freddie Gray. Unlike more recent incidents, including the killings of Michael Brown and Eric Garner, six officers involved in the death of Freddie Gray will face serious charges in connection with his death, ranging from second degree murder to misconduct in office for the handling of the arrest of Freddie Gray. Mosby ended her statements by saying: “To the youth of this city, this is your movement. ... As young people, our time is now.”

Her comments resonated with youth and young adults — as well as Baby Boomers and the elderly — who viewed the charging of the officers as validation of their claims regarding systemic police brutality and racism in the Baltimore Police Department. Since 2011, Baltimore has settled or paid out judgments in more than 100 cases of police misconduct and mistreatment of citizens, worth more than $6 million.

As a young woman said during an interview earlier this week, some perceive it takes “a catastrophe for you to hear our cry.” As a sociologist who studies race and class, a father of two young boys, and a Black man born and raised in the United States who has lived in all regions of the country, I have myriad reactions to the Freddie Gray incident, Baltimore's unrest and police brutality and injustice more broadly.

First, although the criminal justice system likes to examine each case in a vacuum, it is always important for individuals to explore factors that are an impetus behind incidents. In Baltimore, like in other post-industrial cities — including St. Louis, Memphis, and Gary, Indiana — the disappearance of jobs coupled with redlining, restrictive covenants and white flight operate in combination with racial residential segregation and economic disenfranchisement to set the tone for the Freddie Gray incident. These structural factors are the driving reasons why Baltimore has roughly 17,000 vacant row homes.

When I ride through northwest Baltimore, I see downtrodden homes and individuals searching for work in an area that has mostly corner stores with overpriced toiletry items, alcohol and unhealthy food options. Since school funding is based primarily on local property taxes, I see under-funded schools with infrastructure issues and not enough resources for students to thrive, let alone feel they should value education. With economic disenfranchisement and a lack of work opportunities, individuals are more likely to linger in public spaces. This dynamic allows police districts to enforce a broken windows approach that often results in the violation of individual’s human and civil rights. 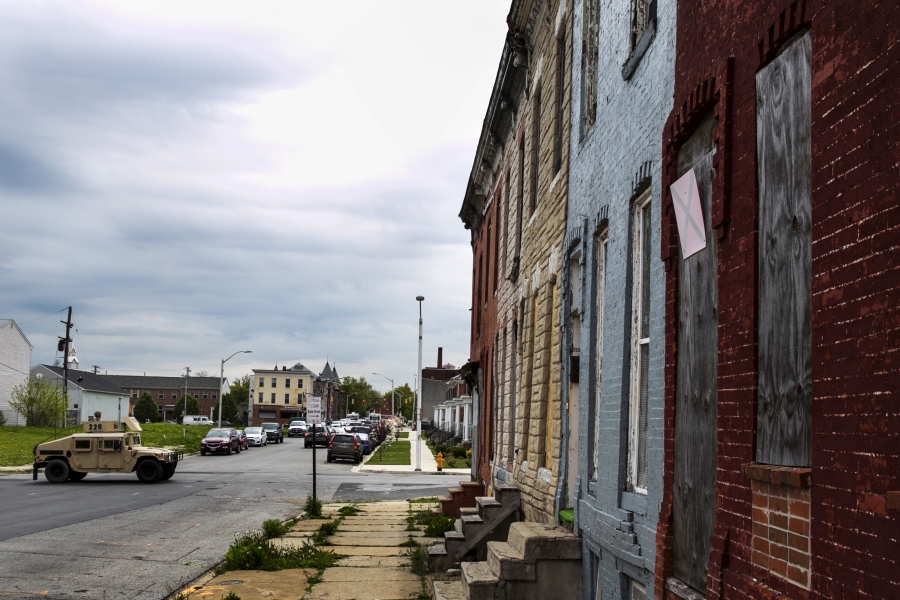 Military vehicles drive on the streets of Baltimore, Maryland May 1, 2015. Residents shouted with joy, embraced and honked car horns on Friday on the same Baltimore streets where rioters had clashed with police earlier this week in anger over the death of Freddie Gray, a black man who suffered severe spinal injuries while in custody.

This is where Freddie Gray met the negligent police officers who now stand accused of being responsible for his death. Upon making eye contact with the officers, Freddie Gray fled. Some people wonder why a person would run if they are not committing a crime; most of these people are not from neighborhoods like northwest Baltimore.

People run because they are tired of being accosted and harassed by the police every time they walk out of school or leave the subway. People run because their mothers and fathers tell them “If you are within a long stone’s throw of our house, run home so I can protect you.” People run simply because they realize that even if they are not committing a crime, they can end up with a broken spine, choked to death, or shot dead for simply having the wrong skin color.

According to a 2012 report from the Malcolm X Grassroots Movement, a Black person is killed by law enforcement every 40 hours. Black male teenagers are 21 times more likely to be killed by a police officer than white male teenagers. And according to stop-and-frisk data, more than 90 percent of people stopped by the police are not committing a crime or carrying contraband. Still, roughly 50 percent of the individuals stopped are physically tormented by police officers, and more than 50 percent of those individuals stopped are Black.

I have no criminal record, and yet I have been stopped by the police more than 20 times in my life; many times for what some might call driving or walking while black. I have been thrown up against walls, handcuffed, arrested, and arraigned. At times, my academic achievements and socioeconomic status actually worked against me during these interactions. Many of my Black and Latino friends have a similar set of experiences. So when people say why did Freddie Gray run, I say why wouldn’t he run?

As a father of little Black boys, I worry about the day that people stop perceiving them as the cute kids to gaze at in a restaurant or on a public street and start perceiving them as potential criminals to be threatened by and afraid of. I grew up in a single-mother household and have never seen my biological father. My mother and I moved 14 times by my 18th birthday. Yet, I managed to graduate from college, progress on to obtain a Ph.D., and now I’m a a professor at a research-intensive university. If I supposedly did everything that society told me I needed to do in order to be upwardly mobile and treated equally, why do I worry that my kids may end up like Tamir Rice, Jordan Davis, Trayvon Martin, Michael Brown and now Freddie Gray?

Similar to the Civil Rights Movement and the cases that led up to Brown v. Board of Education in 1954, Baltimore and the Freddie Gray incident are galvanizing agents in the pursuit to dismantle marginalization, economic disenfranchisement, and policy brutality. Baltimore and Freddie Gray continue the #BlackLivesMatter movement started by three Black queer women. The indictments of the police officers responsible for Freddie Gray’s death hopefully gets the United States one step farther away from the current regime of Jim Crow in the form of mass incarceration and one step closer to systemic policy changes that remove the ability for individuals to be treated like nonhumans.

As I reflect on the events in Baltimore, which is roughly 30 miles from my house, I cannot help but look to my wife and ask, “What world did we just bring our innocent boys into?”

Rashawn Ray is an assistant professor of sociology at the University of Maryland and advisor of the Critical Race Initiative.