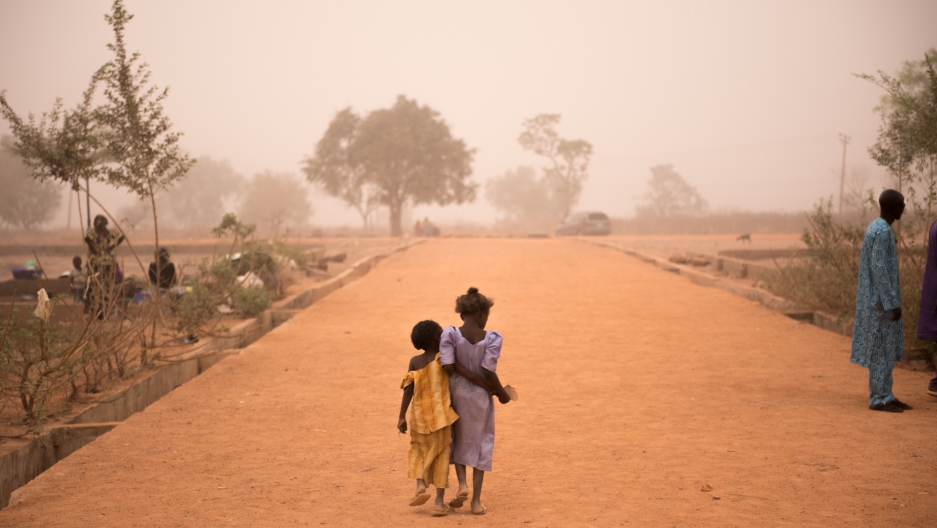 Over 1.5 million people have been chased from their homes by Boko Haram.
Credit: Skyler Reid
Share

﻿Editor's note: This article is part of a GlobalPost in-depth series on Boko Haram. See also Boko Haram: 'They burned our houses, they burned our food'; It takes 'boko' to fight Boko Haram; and Food is running out in Nigeria's refugee settlements.

In early 2014, Boko Haram began attacking scores of towns across northeastern Nigeria, transforming itself from an Islamist terror group to a full-fledged insurgency. By the time government forces launched a concerted effort to fight back, the group had already killed more than 10,000 people and controlled some 20 percent of Nigeria.

It was the townspeople and villagers, Christians and Muslims going about everyday lives, who suffered most. While the world focused on the more than 200 students from Chibok who inspired the #BringBackOurGirls campaign, there were more than 2,000 women and girls kidnapped since the start of 2014, according to Amnesty International. At least 1.5 million people have been chased from their homes. Those who survived carry trauma from which they may never recover. Here are a few of their stories.

“They took away my sister”

Aishatu Salisu, 28, ran into the bush with her five children after Boko Haram invaded Mubi, firing guns into the air to scare off the residents. In the chaos she lost her husband for three days, but by some miracle found him again, and they made it by foot to Yola — a city doubled in number by people fleeing the violence.

Salisu’s husband has since gone back to Mubi, to check on his small electronics repair shop, but found it looted. “It is just like a ghost town,” she says, her hands toying with the edge of her black chador — a long, cape-like head-covering.

Salisu looks down, and pauses. “They came to the houses and took young girls,” she says.

And then she adds: “They took away my sister.”

Turai Kadir, project coordinator of the Centre for Women and Adolescent Empowerment in Yola, becomes distraught as she translates Salisu’s words from her native Hausa.

"It's better for someone to die than to be taken away,” Kadir says, shaking her head deeply. “It's not only the Chibok girls that are the issue."

"It's better for someone to die than to be taken away. It's not only the Chibok girls that are the issue."

Moses Zaruwa, 45, had a life or death responsibility when Boko Haram arrived on Mubi’s doorstep.

As the deputy vice chancellor of Adamawa State University, he was responsible for evacuating the school and getting the students to safety. It was an “exodus,” he says, adding: “I was the Moses of Mubi.”

It was Zaruwa who made the decision to order the students to leave, having received an advance warning by text message from a military contact.

“Sir, we have been dislodged from Bazza just now,” the message says, referring to a nearby town. It warned Zaruwa to “sleep with one eye open.” He has it saved on his iPhone to this day. Now his focus is on finding spots for the students so they may continue their studies. Some of the final-year classes have been placed at universities in Yola, including at the American University of Nigeria. He is also making sure that post-graduate students can write their final exams.

“We have to make sure that Boko Haram isn't victorious,” Zaruwa says.

But the harrowing experiences of the past few months remain uncomfortably close. In February he led a team back to the university to assess the damage, and got a good look at the devastation.

As Zaruwa talks, he scrolls through photos on his mobile phones, stacked on the table in front of him: Burnt-out cars and motorbikes. Charred houses. A woman’s corpse at the side of a road. “I think I better show you some of those things,” he says.

Photos show faculty houses that were raided, and the blackened shell of the campus church, which was set ablaze.

Zaruwa’s office was looted, medical equipment stolen and drawers overturned — though he wonders if some of the theft was done by opportunists after Boko Haram left.

And then Zaruwa shows a photo of two black garbage bags: “My friend Donald,” he says. “My colleague.”

What happened, explains Zaruwa, is that Donald, his twin sons, his wife and his wife’s sister were attempting to flee from Mubi by car when Boko Haram fighters stopped them.

The men shot and killed Donald and his sons, and kidnapped his wife and her younger sister — later releasing the wife.

“I was able to locate where they were killed,” Zaruwa says, showing photos of their ruined car, and stains in the dirt nearby.

He brought in staff from the university pathology lab, equipped with masks, gloves and smocks, to recover the remains. Photos show them dressed in full safety gear, holding the black bags.

The remains of Donald and the twins were returned to his widow for burial in their village.

All fit in a single coffin.

We live in fear: Surviving Boko Haram from GlobalPost on Vimeo.

Imagine, says Zaruwa, the trauma for Donald's widow. He adds: “She is only one of thousands.”

Zaruwa, a biochemist, has a PhD in pharmacy specializing in alternative medicine. He studied in Chiang Mai, Thailand, among other places.

He recently enrolled for a diploma in psychology, seeing the lack of mental health services in Nigeria, and the great need as a result of Boko Haram’s wrath. “The nearest university in Nigeria that offers psychology is some 1,200 km (about 750 miles) away,” he notes.

Zaruwa thinks that there should be psychologists in every school to help the many children traumatized by Boko Haram — but there aren’t nearly enough trained professionals.

“A lot of people have lost so many things, and you don’t see the government saying anything to console them,” he said.

"I lost my place of work. I lost three relatives in one day. I don't know how I am not crazy."

He wants to write a book about what happened. One day.

“Even if they go back home, there is nothing”

From her hideout in the mountains, Hauwa John watched Boko Haram hunt for her, searching door to door in the town below.

John, a 27-year-old mother of three, had made the mistake of returning once before, lured down from the hills by a promise of safety — if she would only convert to Islam.

The Boko Haram men didn't bathe and their hair was dirty — they were "full of madness."

She lived as a neighbor to the insurgents for a week, along with seven other women from Madagali, northeastern Nigeria. The Boko Haram men didn't bathe and their hair was dirty — they were “full of madness,” John said. “There's one woman who usually sells beer in the community. She ran away, and they drank it all. If you look at them, they look crazy.”

John and the others were given headscarves to wear, and told at gunpoint they had to convert. Even the Muslims were ordered to convert again. Instead, on a Friday with all the men at prayers, the women fled into the mountains, beginning a long trek that would take them across the nearby border into Cameroon and eventually back to Nigeria.

Today John and her children live in a white Oxfam tent on the grounds of St. Theresa's Cathedral in Yola. They are among 2,700 people who have sought sanctuary here, squeezed into tents on the dusty church grounds.

The conditions are grim. This is the refuge of the desperate — those who couldn’t find a private home, those with nowhere else to go.

Women and children lie flaked out in the midday heat, utterly exhausted, sleeping on bare mattresses in an event hall that now serves as the chaotic quarters for dozens of displaced families. Outside little barefoot boys fly kites made from plastic bags, and throw paper airplanes made from discarded notepaper.

Father Maurice Kwairanga sits in his office at St. Theresa’s writing letters seeking donations: medicine, food. On his desk is a thick stack of air waybills for urgent messages sent to Nigerian pharmaceutical companies, seeking basic medicine for the people staying at the cathedral.

“We thought they'd be here up to Christmas,” says Father Kwairanga. Now the church hopes the displaced will be able to go home by June, “but it is possible it could take longer.”

“Even if they go back home there is nothing,” he adds.

Madagali was retaken in March by the Nigerian military. But John, who farmed a small plot of land and supplemented her income by selling cooking oil, is terrified to return, both from the trauma of her time with Boko Haram and because there is simply nothing left. Buildings have been looted and burned. There is no market, nowhere to buy food.

And then there’s the terror. John’s heart still races when she sees men in uniform. It reminds her of the day in August that Boko Haram captured Madagali, dressed like soldiers to the confusion of residents, riding on tanks and trucks. Her children wake up screaming from nightmares.

As much as she hates Boko Haram, she doesn’t trust the government to protect her family. "I just think they are deceiving us," she says. "It is like they want us to go back and Boko Haram will come and kill us again.”

While Nigeria’s military — along with the armies of neighboring Chad, Cameroon and Niger — have since February retaken the towns claimed by Boko Haram, this by no means marks the end of the crisis.

“Recent military successes might spell the beginning of the end for Boko Haram,” says Salil Shetty, Amnesty International’s secretary general, in a recent report on the violence.

“But there is a huge amount to be done to protect civilians, resolve the humanitarian crisis and begin the healing process.”

Food is running out in Nigeria's refugee settlements