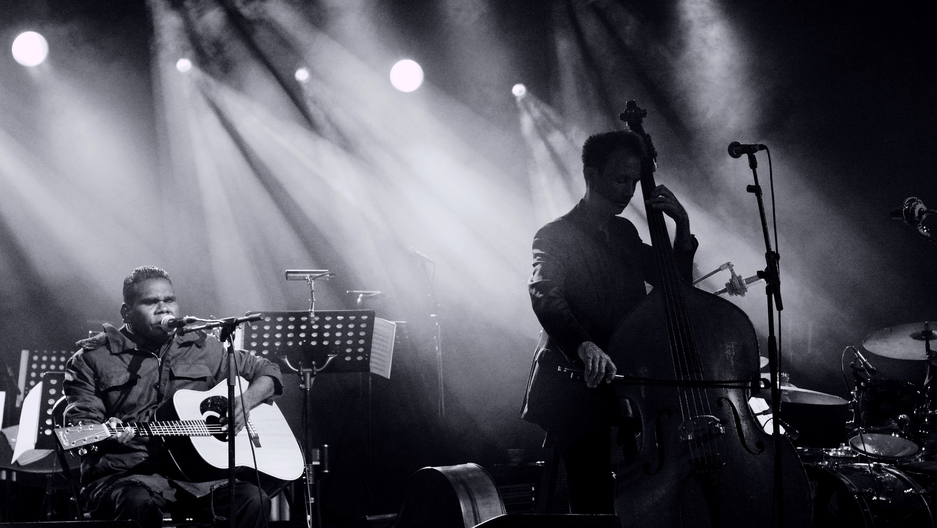 Gurrumul performs at a concert in honor of ANZAC Day in Zonnebeke, Belgium.

Geoffrey Gurrumul Yunupingum, or Gurrumul for short, is a top-selling indigenous artist from Australia. He made his debut in the United States earlier this week and wowed the crowd.

But that doesn't mean he enjoys the limelight. His producer and bass player, Michael Hohnen, does all the talking for him.

Gurrumul doesn't give any interviews, something Hohnen says goes back to the start of his career. Gurrumul is shy, Hohnen explains, and a couple of ugly press stories" didn't help matters. And beside, Hohnen says, "culturally he's not the person who actually speaks on behalf of himself or his people."

So Gurrumul lets the music do the talking for him. And while we couldn't interview him, we did get an exclusive performance of his song "Bapa."

Gurrumul's star power seems pretty unlikely. Not only is he silent in the press, he's also blind, comes from a remote island off the northern Australian coast and sings and speaks in a language used by no more than 3,000 people. So how he did break through?

"I think it's more to do with the emotional attachment people have to his voice," Hohnen says. "He just seems to be able to channel both an emotional attachment to melodies and songs. But [he] also has that in a ballad way, that Western pop aesthetic that really captivates people."

Hohnen certainly fell under Gurrumul's spell when they first met 20 years ago. "I was trained classically and played pop and jazz, but ended up finding that I needed to discover more than just that European tradition," he says, "What I've discovered is that out in remote parts of Australia there's more culture and language and understanding of what's there than what the scientists and farmers will ever show you about a country."