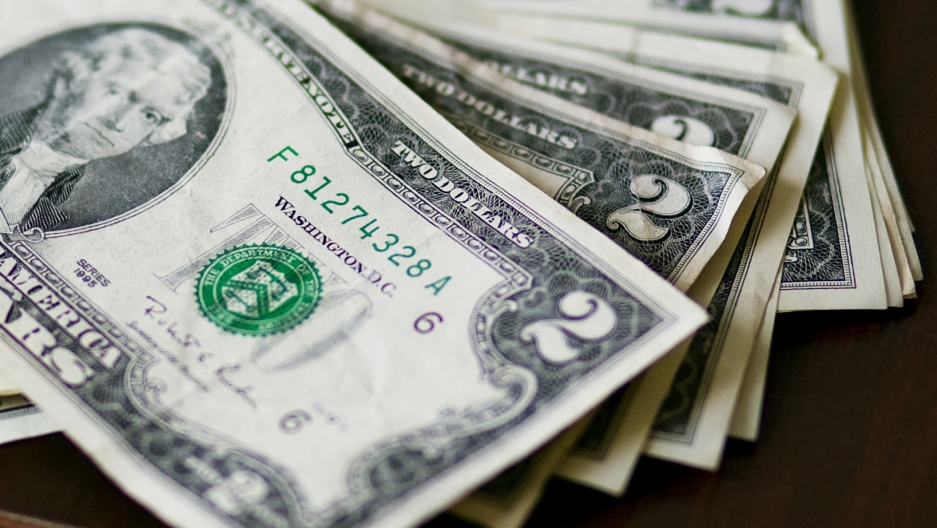 A pile of American two-dollar bills, which are relatively rare everywhere the currency is used.

Journalist John Dennehy has long been obsessed with the $2 bill. And during his last few trips to Ecuador, where he lived and worked from 2005 to 2009, he realized he’s not alone.

Ecuador has used the American dollar as its official currency since 2000, replacing their former currency, the sucre, after it experienced massive inflation in the 1990s. If you think two-dollar bills are rare in the United States, they’re even rarer in Ecuador — and Ecuadoreans love them.

“The way that they get their US dollars is similar to how a bank here will order money from the Federal Reserve when they need more fives, 10s, 50s, whatever," Dennehy explains. "The Central Bank of Ecuador will do the same thing, just on a much bigger scale. And $2 bills are not a priority for them, so there’s very little in circulation there."

It's that scarcity that gives the bills their allure, he says — so much so that there’s even a black market for two-dollar bills. “You could sell a very crisp two-dollar bill for three or four times the value,” Dennehy says.

The two-dollar bill was introduced in the United States in 1862, originally featuring an image of the first Secretary of the Treasury, Alexander Hamiliton; Hamiliton was supplanted by Thomas Jefferson in 1869. The bill has been in constant circulation ever since, except for a 10-year gap from 1966 to 1976 when the treasury stopped printing it.

While two-dollar-bills are sometimes considered bad luck in the US, the rare bills are good-luck charms in Ecuador. “There’s a superstition that if you possess a [$2 bill], then more [money] will come to you," Dennehy says.

One Ecuadorean friend told Dennehy that after a two-dollar bill was stolen from his wallet at a party, his financial situation soured. “He explained to me that he was having such bad luck with money and he was really just scraping by until ... he got the two-dollar bill back," he says. "The next week he got a promotion, and he attributes that to the two-dollar bill."

By that measure, Dennehy may be the luckiest man in the country: On his last trip to Ecuador, he brought $400 worth of two-dollar bills along with him.