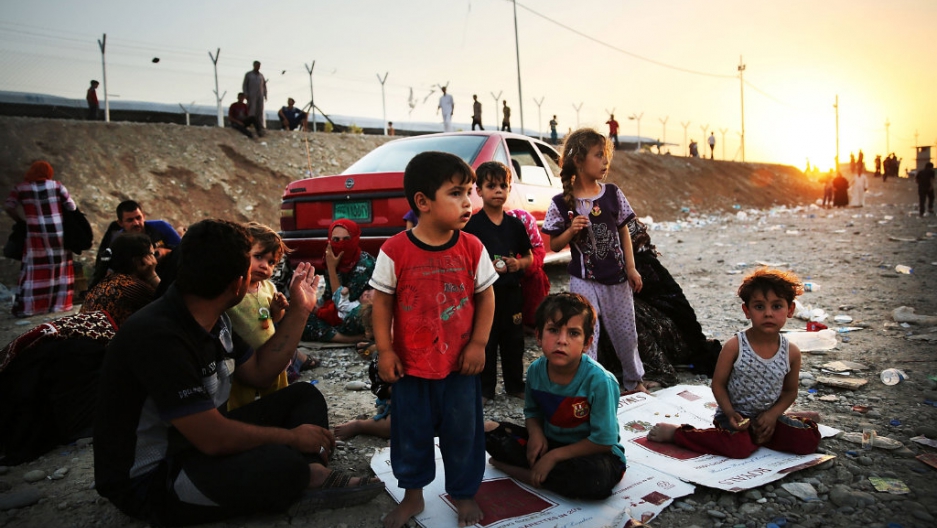 Iraqi children who fled recent fighting near the city of Mosul prepare to sleep on the ground with their family as they try to enter a temporary displacement camp but are blocked by Kurdish soldiers on July 3, 2014 in Khazair, Iraq. Those who stayed behind face growing restrictions in education, career and everyday life.
Credit: Spencer Platt
Share

There’s not much we know about life under the Islamic State, which is why it's so important to amplify the voices of people who have experienced it.

From the little we do know about what people who live in areas controlled by the group — from IS propaganda, from information smuggled out, and from people who have managed to escape — it’s easy to piece together a terrifying world of horrific brutality and draconian rule.

Around six million people live in IS-held territories, which span parts of northern Iraq and eastern Syria. The group’s violent rise has meant a long list of human rights violations  — “war crimes, crimes against humanity, and possibly genocide,” according to UN.

The US-led fight against the group has also led to civilian deaths.

Combined with the already existing bloodshed and devastation in both Syria and Iraq, it’s particularly worrisome how difficult it is to learn what goes on in IS-controlled areas.

Here are quotes from people who have managed to survive the group. They offer a glimpse into what life under the militant group is actually like.

“In Iraq, if you ask people where are you from, everyone gives different answers,” Samer told GlobalPost. He was forced to leave his home in Bashiqa, Iraq with his wife and son after IS took over the town. “Honestly, I don’t see any light in the future, I don’t have any hope.”

“They took us to an open area in front of a trench. They told us to make a row. We looked down and saw bodies,” said 15-year-old Firas, who survived a mass killing of Yazidi men in Kocho.“We were all lying on top of each other. They thought they killed everyone. They came through and shot everyone in the head and the back. Then they left.” Firas, a Yazidi, survived an execution attempt by the Islamic State.

“I told him not to touch me and begged him to let me go,” 12-year-old Jalila, who was abducted and sent to Syria, told The Independent. “I told him to take me to my mother. I was a young girl, and I asked him, ‘What do you want from me?’ He spent three days having sex with me.”

“The Islamic State is punishing the Syrian people under the pretext of religion and cutting them off from almost everything,” 25-year-old Abu Muhammad, an activist in Raqqa, told the International Business Times. “In Raqqa you see lines of people in front of the relief kitchens because of the severity of poverty, while elements of the organization eat the best types of foods and boast about themselves and their 'Caliphate' on social networking sites.”

“My 5-year-old grandson was clutching his favorite toy,”  said Inam, 55. “He said, ‘Please Sir, this is for me.’ This is a child, just a child, with a valueless toy. But the Islamic State man took it from his hands and said, ‘You are Christian, nothing is for you.”

“It was impossible to speak to them, so we don’t know who was in charge,” George (whose name has been changed) told GlobalPost. “But you could tell by their faces they were from different countries. Some looked French. There were Russians and other Arabs, even some Chinese. I saw many fathers working with their young sons.”

“We are living in 2014, but they think and behave as if they live during the Islamic invasions of a thousand years ago,” said Fr. Amanual Sadel. Freya Azam Ali, second from right, sits with her family at the Khanake refugee camp in Duhok, Iraq, two weeks after escaping Islamic State captivity.
“When I was in labour, I went to the hospital wearing a veil though it was too hot,” Mosul resident and pediatrician Maha Salah told the Guardian. “Isis Hisbah (religious police) were at the front door of the hospital. I saw some women in labor who seemed to be in a panic and did not have time to wear a veil. I was shocked to see that they were denied access to the hospital unless they put veils on their faces.”
"After the entry of Daash (the Arabic name for ISIS), the city became unbearable to live. This was once the city of freedom, or "the capital of liberation" as activists have called it,” 28-year-old Ahmed Ali from Raqqa told the International Business Times. “People had been living in absolute freedom and the city was open for all religions before the entry of Daash. When they came, the conditions became reversed.”
“I can never again set foot in our little village, even if it’s freed from Islamic State, because the memory of my brother who died nearby would haunt me too much,” 14-year-old Narin (name has been changed) who was "gifted" to an ISIS commander told the Washington Post. “I still have nightmares and swoon several times a day – when I remember what I saw or imagine what would have happened if Shayma and I hadn’t escaped. What can I do? I want to leave this country altogether. This country is no place for me anymore. I want to go to a place where I might be able to start over, if that is even possible.”
“They didn’t feed us much,” said Sara, a 15-year-old Yazidi girl "gifted" to an IS fighter, told GlobalPost. “I used to pass out a lot, but I would make trouble for him as much as possible and fight when I could. Many times I thought of suicide but I kept thinking of my family and brother. I lived only for them.”