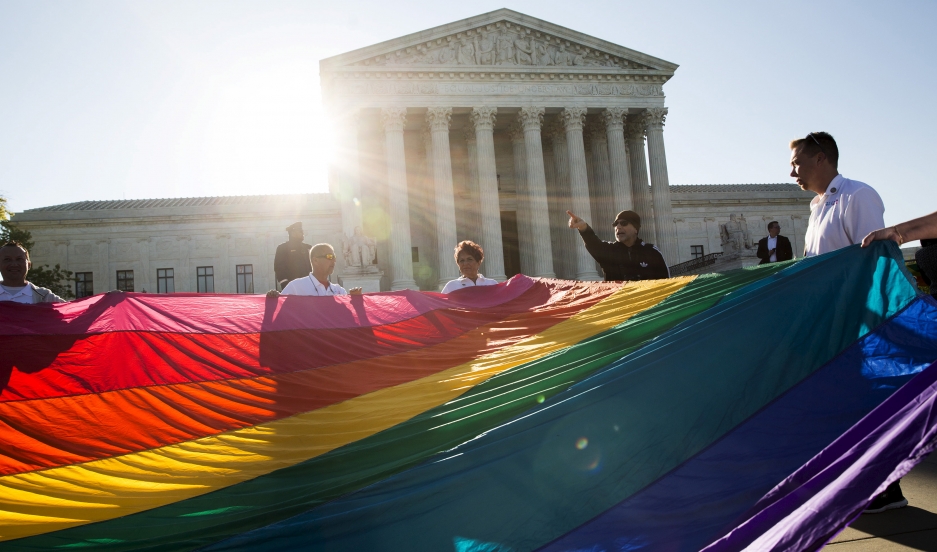 Gay marriage supporters hold a gay rights flag in front of the Supreme Court before a hearing about gay marriage on April 28, 2015.

The US Supreme Court heard arguments on Tuesday in a case that's expected to finally decide the issue of same-sex marriage nationwide. It's far cry from the origins of the same-sex marriage movement, which may have actually started decades ago when one low-level government worker decided to go with her gut.

In 1975, Clela Rorex was a county clerk in Boulder, Colorado. She had only been on the job for three months when two men walked into her office. They wanted to get married.

Before the first couple turned up on her doorstep, Rorex had never even met anyone who was gay or lesbian. She turned to her district attorney for guidance, but there was none to be had; at the time, the Colorado marriage code didn’t even mention same-sex couples. The decision was entirely up to her — and Rorex didn’t hesitate.

“Here were two people who were asking for a legal right," she says. "I was an active feminist at the time. We were asking for legal rights. To me, there just wasn’t any difference. If other people were seeking civil rights, why not all people?”

Rorex gave them — and five other same-sex couples — a marriage license. In the process, she caused a national uproar. But looking back on her decision 40 years later, Rorex says she didn't intend to do anything profound.

“I can’t tell you how naive I was,” she says. “I was pretty young, 31, and I hadn’t had a lot of exposure to many other places, and certainly not to the gay or lesbian community. ... It was very simple for me. [It was] a question of am I going to be the one to take away such a right if this right exists? And I could never have lived with that.”

Forty years later, Rorex’s ideas are finally in the mainstream of American politics — but not everywhere.

That point was driven home when Tony Sullivan and Richard Adams, one of the couples she had given a marriage license to, reached out to her. Their marriage still wasn’t legally recognized decades later. But Rorex’s decision still made a huge difference in their lives.

“I saw how they were together. I saw how meaningful that marriage license was to them,” Rorex says. “It brought it home full circle.”

She says it’s important to remember the power of administrative officials in the current fight for same-sex marriage. They’re the ones who end up making decisions on the ground that affect policy, she points out, though not always to the benefit of LGBT couples.

But as the issue heads back to the Supreme Court, Rorex says she’s hopeful. “My toes and fingers are crossed,” Rorex says. “It just has to go forward. We cannot have piecemeal civil rights in our country. And to me, marriage equality is a civil rights issue. It’s a human rights issue.”