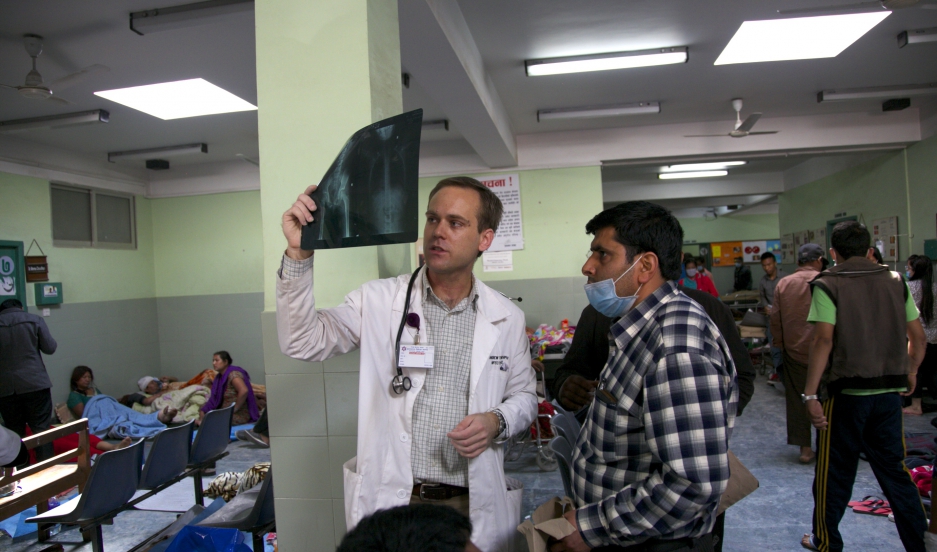 Dr. Andrew Trotter works at the Tribhuvan University Hospital after the earthquake.

Andrew Trotter is an American who fell in love with Nepal, and moved there two years ago.

He’s a doctor, and was working on a program in Kathmandu to counter communicable diseases like TB and HIV. But then the earthquake struck.

"So, I was at home doing laundry, actually," he says. “When you come to Nepal, you know that this might happen. So I was prepared. But you‘re still not sure exactly that it’s happening in the beginning.” As soon he figured it out, Trotter took shelter under a table “and just kind of held on.”

“I’ve never felt anything like that,” he adds. He stayed under the table for a while as aftershocks continued.

Trotter lives in an old part of the Nepalese capital, where almost no other foreigners live. The neighborhood is densely populated and characterized by narrow alleys.

He says he and his neighbors all gathered in one of the few open areas, a place where kids usually play basketball. “We were just talking, and consoling each other,” he says. There were more aftershocks, and some people just sat down “because they didn’t know what else to do; worried that things might fall on them.”

Trotter’s neighborhood actually stood up pretty well to the quake. Plenty of houses were damaged but luckily none were destroyed. So Trotter says he was not at first aware of just how severe the damage was elsewhere until he managed to reach his hospital.

“And then I saw what was coming.”

There was a flood of patients. Tribhuvan University Teaching Hospital is one of the best in the country. It had been built by Japanese engineers to withstand a major earthquake. So the fact that it was intact, coupled with its reputation, meant it was swamped.

“I’ve never been in this situation,” he adds, “but I felt it was kind of like a war. Like what it would feel like being in a war, because there was a lot of traumatic injury.”

The stream of injured people continued as people started coming in from the surrounding countryside. Some are still coming in from more remote areas, four days after the quake.

More than 5000 people are known to have died in the earthquake, and more than 10,000 were seriously injured.

Trotter credits his training as a doctor with helping keep his own emotions in check when confronted with so much trauma. “You learn to just do your job, and you get into a mode sometimes where you’re just doing what you know you have to do. Those first patients that I saw, initially, it was overwhelming. But you realize that you ... have to do something, right away.”

He says it’s only later that you can start to process what you’ve seen. “When you have downtime, when you have time to take a deep breath, it’s really difficult. It’s very difficult to see children and elderly (people) with such severe injuries.”

Trotter has not gotten much sleep since the earthquake struck four days ago, from a combination of the aftershocks and the work. “You feel like you just can’t leave.”

Trotter lives in Nepal because he loves the country and its culture, and that’s been reinforced by what he’s seen in the last few days. “Nepalis are very socially and community oriented people. And I’ve seen people really come together. Being in Nepal for a long time, and feeling like I have a Nepali family, that’s really helped support me. Because they’ve reached out to me, and shown signs of solidarity just like they do with their own friends and family.”