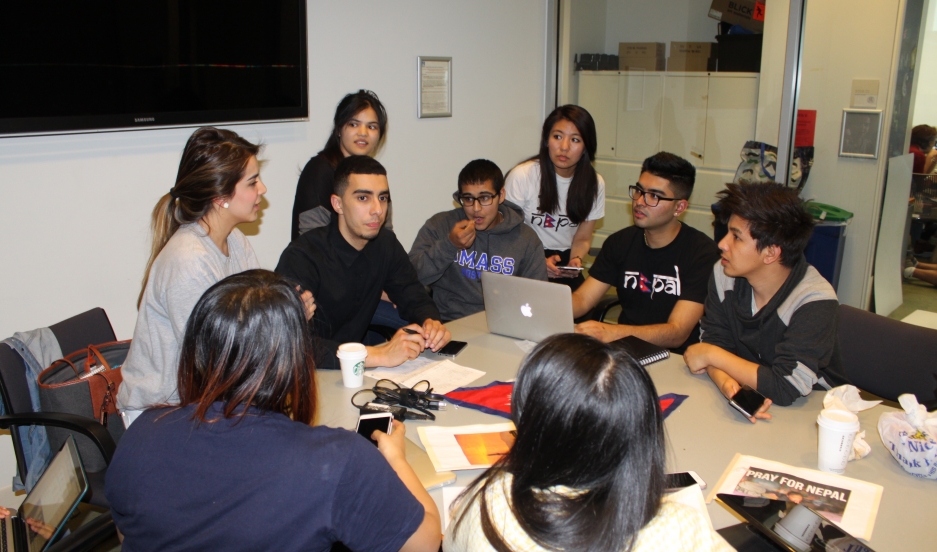 Leaders of the Nepali Student Association at the University of Massachusetts Boston called an emergency meeting Monday afternoon. They expected a handful of people to show up. Instead, nearly 40 crammed into the room they had booked at the student activities center.

“This is the biggest turnout we've ever had,” says Anamol Gurung, the group’s president. “We didn't know everyone was going to show up, which is awesome.”

Schuyler Korban, vice provost of the Office of Global Programs, was there, too.

“They [the Nepali students] are part of our family,” Korban says. “The UMass Boston family cares about everyone at this university, and they are facing a tragic situation back home. We’re here to help them out any way we can.”

One of the students, Shailesh Thapa, is a senior from Nepal, majoring in biotech. His home town of Bhaktapur was badly damaged. His mother, father and brother are OK, but he hasn’t heard from many of the friends he grew up with.

“I got a call from one of my friends,” Thapa says. “His house fell down; his two younger sisters got trapped under the house and they were yelling for help until yesterday, but today they can't hear them anymore. They’ve been trying to get them out, but the house itself was so buried. It's really hard to get those little kids out from there, and they haven't heard from them now, and I'm just hoping that they're alive.”

Another student, Parmita Gurung, left Nepal for the US when she was 8. She still has vivid memories of her childhood there and strong connections to her homeland. Her relatives are living outside, under the trees, for now.

“I was at work the other day and I got a phone call from my uncle,” she says. “He told me not to worry and then he passed the phone to my grandmother. She started talking to me and I could tell she was trying to tell me not to cry so much, that everything was going to be fine, but I could feel the tremor in her voice and I just broke down crying.”

Other students have similarly emotional stories. Everyone's immediate family members are OK, but that doesn't mean their futures are secure.

“The house that my dad grew up in ... it's gone,” Anamol Gurung says. “Everybody is very stressed out about people losing their lives, but it's way more serious than that, because yes, people died, but the people who survived, they actually have nowhere to live.”

Gurung talked to his uncle on the phone. He says he could tell his uncle was trying to sound optimistic so he, Gurung, wouldn't worry, but it didn't work because Gurung could hear people screaming in the background. Still, he's moved by all the support he and his fellow Nepali students are getting on campus at UMass Boston. The students and staff who came to the emergency meeting spent an hour brainstorming how to raise funds and let people know about the earthquake.

“It's really great to hear a lot of positive ideas,” Gurung says. “The more people there are, the more ideas we get rolling, and everyone knows something that you don't know.”

Some of the ideas students came up with include making sure money goes to bona fide charities and not scams, asking professors for time to speak about the earthquake for a couple of minutes at the beginning of each class, handing out information cards with links for donations, and telling personal stories so people here in the US can relate to the tragedy.

As they speak, the Nepali students veer from pragmatic to heartbroken and back again. They are grieving hard, longing for a homeland they fear will never be the same. In the short term they plan to cope by raising as much money for Nepal as they possibly can.