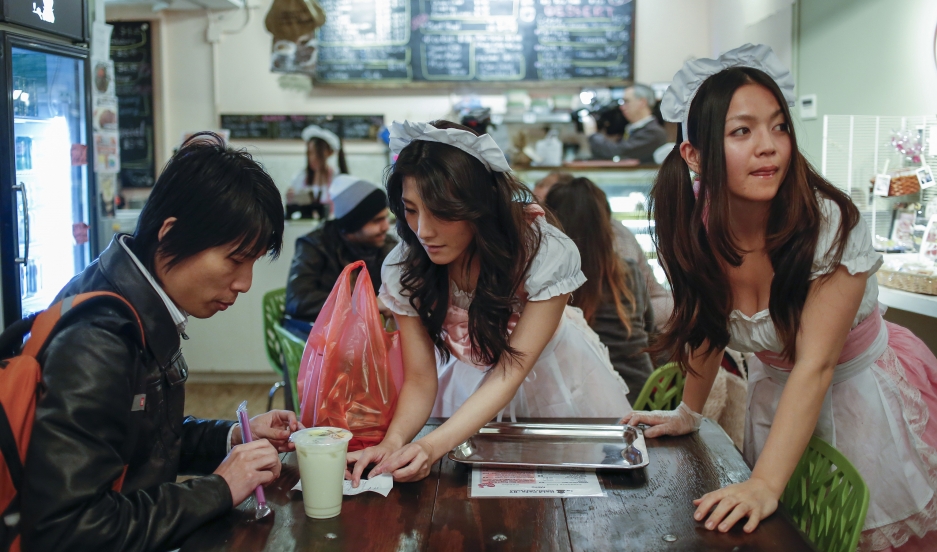 Waitresses at the Maid Cafe New York serve an order at the cafe on November 20, 2013. Such cafes have existed in Japan for years, designed to cater to the fantasies of anime and manga fans.

For Brittany Bronson, clocking in on the job means putting aside her deeply held feminism.

Bronson serves cocktails at a casino in Las Vegas, a job she uses to supplement her income from teaching English at the University of Nevada, Las Vegas and writing op-eds for the New York Times. In a recent op-ed, she wondered, "Can You Be a Waitress and a Feminist?"

Her answer seems to be a reluctant no.

"What I'm doing at work is more of a performance, and how I'd react outside of work is more truly reflective of my ideas and what's important to me," Bronson says. "When a man makes a sexist comment or an advance that I find inappropriate, I have to act in a different way for the sake of my job."

Bronson says she would never tolerate the sexual harassment she faces as a cocktail server in any other job.

"I would say something back, I would walk out, I would exit from the situation," she says. "But in a restaurant setting, where I'm meant to be cordial and have a relationship with my guests, I'll laugh or I'll make a joke. I'll smile and pretend that I'm on board, even though inside I don't feel comfortable with what comment is being made, or if a hand is on my shoulder or on my hip."

According to a report last fall from Restaurant Opportunities Center United, a group that advocates for the rights of America's 14 million restaurant workers, servers are twice as likely to experience sexual harassment, and many tolerate it in exchange for a larger tip. Bronson agrees.

"I make a compromise to ensure and protect my income," she says. But she also argues it's not just servers or waitresses who face that challenge: "Women in the service industry — not just those who are in a highly sexualized position like mine in cocktailing, but across the country — have to deal with this at a much more frequent rate ... than their male colleagues working the same position."

Bronson cites the report as evidence that the playing field is slanted against servers like her and other working-class women.

"The more crucial that tip is as your income versus a steady wage, the more likely you are to excuse sexual harassment or interpret it as less severe or as not as much of a problem," Bronson says. "For a working-class woman, it can be more difficult to access those feminist ideals."