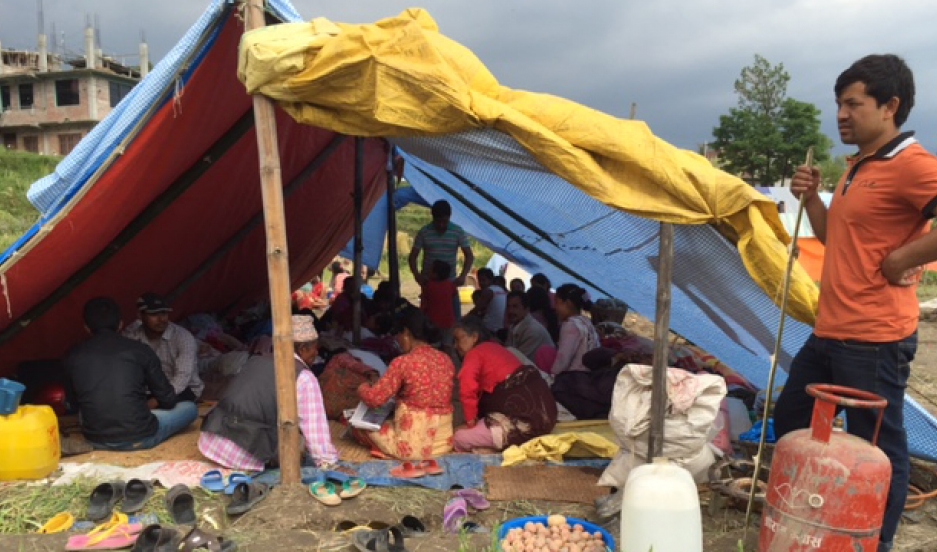 Residents of the village of Khokana, near Kathmandu, are living in tents after many of their homes collapsed in the earthquake of April 25, 2015.

For almost two years, running has been my favorite way of exploring Kathmandu. I live in the southern suburbs of the city, which push up against the fast-disappearing terraced farmlands that produce seasonal cascades of colors that move from tawny wheat to brilliant mustard yellow and the emerald green of rice shoots. This is where I began to understand the infinite complexities of life in Nepal, and where I could step back from the chaotic urbanization of the city and see into the country's past.

The town of Khokana sits on a ridge, its brown brick buildings plowing through the white wisps of each morning's fog towards the smog of Kathmandu. Khokana is one of the oldest villages in the area, a place dating back hundreds of years where the elders speak only Newar, a Tibeto-Burmese language.

My runs always ended in Khokana's narrow streets, past the soaring temple to the goddess Indrayani on the main square where the temple goats share space with motorcycles and open-air butcher shops. Buffalo still live in the ground floor rooms of houses, women wash their pots and their hair on the door stoops and card their wool together in the squares. Garlic and red chillies hang to dry in long strands from the rooftop.

Then came the earthquake on Saturday, tearing down the traditional mud brick and tile-roofed houses. From my house a kilometer up the road, I could see the town was enveloped in a dense cloud of dust. Miraculously, only 12 people died. But Khokana is now a ghost town, and its roughly 12,000 inhabitants have all moved to communal tents in their nearby fields, trampling their garlic and tomato crops and living constantly in fear of relentless aftershocks.

Khokana has been my solace in Nepal, and as I motorbiked down the steep road today, I dreaded what I would find. What greeted me, not for the first time, was Nepal's ability to cope and organize without help from its own government.

At the town's entrance, about a dozen men in fluorescent vests — some wearing hard hats — were screening entrants while making announcements on a bull horn. These were not government officials but local residents. No one was allowed to pass without signing in and out, wearing a hard hat and having an official escort.

Dinesh Maharjan, 26, was my escort, and he gladly took me on the grim tour of the town in which generations of his family had lived. I hardly recognized it. It was almost entirely empty except for some residents carrying out old plywood sheets. On some streets, entire houses had crumbled into brick piles blocking the narrow roads. 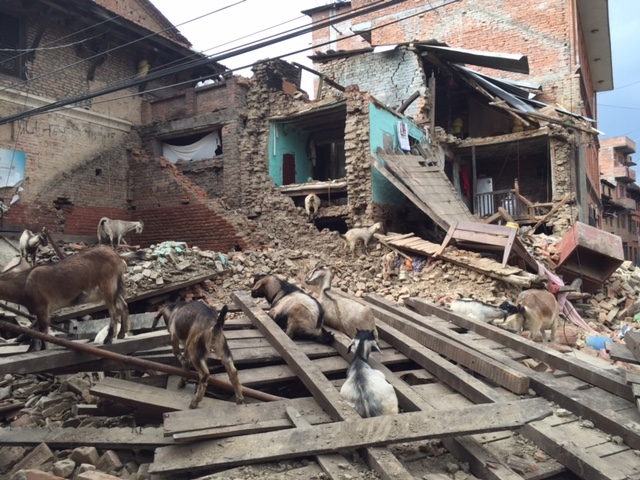 Goats hunt for food in the wreckage of Khokana's pati, a traditional open-air meeting place.

"I am a person of this society," Maharjan told me, "It is my responsibility to show people what has happened. There is so much fear still going on in my mind and in everyone's mind."

He estimated almost 90 percent of Khokana's houses are now uninhabitable and will have to be rebuilt. The Indrayani temple seemed intact from my house, but up close it leans to one side and has huge cracks on one wall. The rest of the main square is rubble.

The traditional pati — a covered outdoor meeting place meant to bring together people from different castes and professions — is now a pile of wood, cement and bricks thanks to Sunday's huge aftershock. Four old men were buried underneath; the town's "holy goats," abandoned by their minders, climb the wreckage in search of food.

Maharjan said the police, along with an excavator, came to help for about an hour after the original quake. The rest of the rescues were done by residents, using farming tools and their own hands.

In the nearby fields, each tent houses as many as 40 people. There is a portable solar inverter, cell phone recharger and many people cooking. "We are now refugees in our own country," Maharjan said.

Among those refugees, I saw a familiar face. After months of photographing a specific street in Khokana during my runs, I interviewed 49-year-old Tara Devi, one of the local farming women, for a report on World Happiness Day. As we hugged, I remembered her huge smile, which broke through even as she told her story of the earthquake, her voice hoarse and hacking. She was alone on her roof when the quake hit and screamed for help. Neighbors came to help her down a ladder.

"I want to rebuild my home, but this time it will be smaller and modern. Not like my old one," she says. But the earthquake and its tremors are never far away.

"When I stand or walk, I can always feel it," she says. "My fear is always alive in my mind." 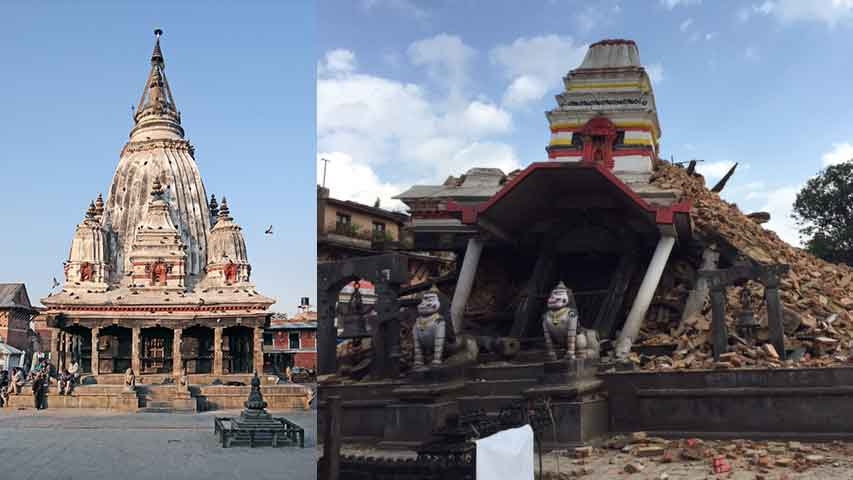 Bungadyah Temple in Nepal, home to the Red God the Rato Machhendranath. (L) Jean-Pierre Dalbéra/Flickr/Creative Commons in 2013. (R) Donatella Lorch after the earthquake in April 2015.