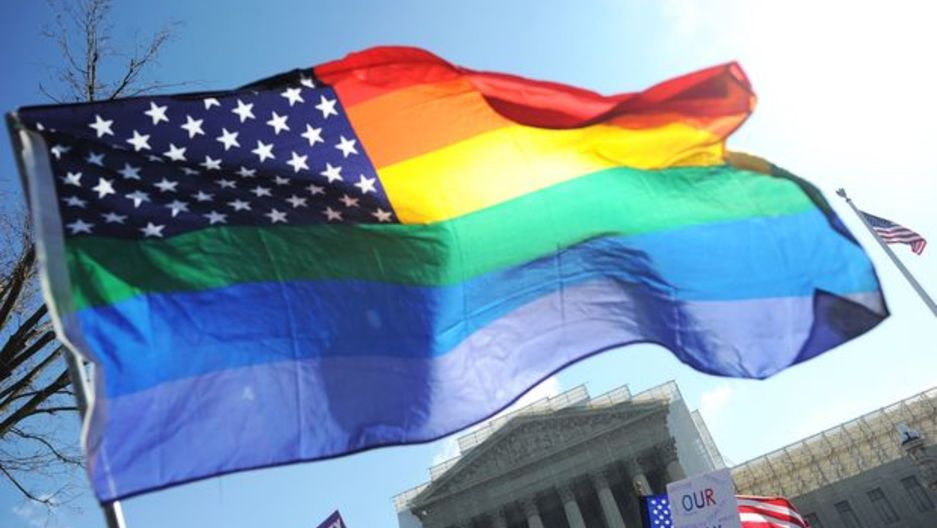 Same-sex marriage supporters wave a rainbow flag in front of the US Supreme Court on March 26, 2013 in Washington, DC

The arguments made at the Supreme Court on Tuesday, when the justices hear Obergefell v. Hodges, the latest case to challenge a particular state's refusal to recognize same-sex marriage, may well echo those of an earlier trial, one that broke new ground, and not just in the legal sense.

The case involves James Obergefell, who married his terminally ill partner, John Arthur, on his deathbed. The couple wanted the state of Ohio to recognize their union on Arthur's death certificate, despite Ohio's ban on same-sex marriage. The ruling is expected to be historic. Justices may legalize same-sex marriage nationwide or force states to recognize unions made in other states.

It follows in the footsteps of Hollingsworth v. Perry, the 2010 Supreme Court decision that overturned California's Proposition 8, which banned same-sex marriage.

Hollingsworth v. Perry has been widely celebrated — it was even the subject of a critically acclaimed documentary "The Case Against 8," which aired on HBO last June.

In his new book, "Speak Now: Marriage Equality on Trial,” Kenji Yoshino, a constitutional law professor at New York University School of Law, argues that it's hard to overstate the importance of Hollingsworth v. Perry in the recent fight for gay rights.

According to Yoshino, many advocates involved with the gay rights movement were concerned that case would set a bad precedent for the future of LGBT equality.

“It’s hard to remember this, but only four states had same-sex marriage at the time, so we thought it was a really risky proposition,” says Yoshino. “The game changer for me was engaging with the trial.”

In August 2010, US District Court Judge Vaughn Walker held that the Proposition 8 marriage ban violated the equal protection and due process rights of gay men and lesbians under the 14th Amendment of the US Constitution — a ruling that ultimately sent the case to the Supreme Court.

Though he was initially hesitant about the Supreme Court weighing in, when Yoshino started to dig into the transcripts of the case, he knew he was looking at something truly historic.

“There had never been a full trial on all of the issues,” says Yoshino. “What Chief Judge Vaughn Walker did was to really give the nation the privilege of having every single issue vetted… Every claim that the other side made about whether gay people were bad parents, whether this would negatively affect opposite sex marriage, whether this would hurt religious liberties — it was raised and completely destroyed and debunked in a way that is just not possible in a referendum context, or even in an academic debate.”

In the end, Yoshino was astounded by the power of Hollingsworth v. Perry — he realized that the case was unique in that it didn’t just hinge on technical legal issues, but also allowed the judges to consider greater philosophical questions, like the meaning of  love, marriage and happiness.

“I didn’t really have any strong priors about whether trials were a good thing or a bad thing,” says Yoshino. “What really struck me about this trial was just the sheer humanity of it — that these were not platonic abstractions dueling with each other. As [attorney] David Boies said, papers talk past each other — you need human beings confronting each other in order to understand the full stakes of what’s going it.”

The intense and at times passionate testimony given in this case, Yoshino argues, helped to move the needle and ultimately pave the way for other cases, like Obergefell v. Hodges. He points specifically to the testimony of Ryan Kendall, a 26-year-old man who was forced to go through conversion therapy.

“He testified on the stand that his mother had said to him, and she is an evangelical Christian herself, that she would’ve rather had an abortion then had a gay son,” says Yoshino. “He became so depressed under the rigors of the conversion therapy that he decided that he was going to commit suicide and ultimately had to emancipate himself from his parents. When he gave this testimony, it really brought to life what the real stakes are.”

“It was a one-two punch, both the narrative and the data, that made for such a powerful presentation that was unprecedented in our nation’s history,” Yoshino says.