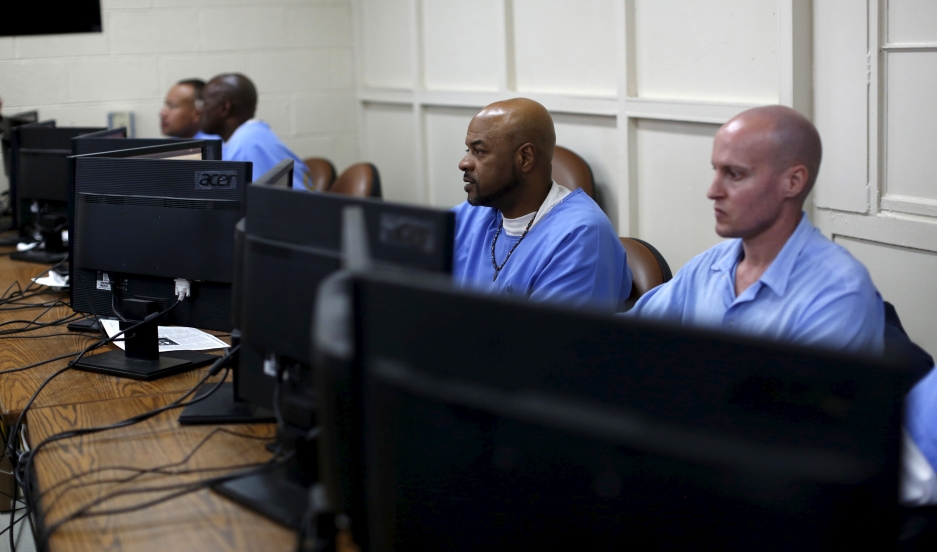 Graduates of a prison computer coding class at work inside San Quentin, in California.

Earlier this month an editorial was published in the New York Times from an unusual source. The writer was John J. Lennon, an inmate at Attica Correctional Facility in New York, who’s currently serving a 28 years to life sentence for drug dealing and a murder he committed in 2001.

He is one of 23 out of 2,300 inmates participating in an education program, and he advocates greater access to education in prison through TV. Currently, he says the TV is used as “an incapacitation tool; it's a tool to keep us entertained in cells.” But he suggests that prison TVs should stream online courses instead of movies.

“If inmates had the chance to watch [an online course] then they might say, “Hey, look what's on Channel 3, it's an interesting lecture from a Duke professor on existentialism or philosophy. Believe it or not, people will tune in, and after the lecture they're going to go on their gates, hang on their bars, and they’re going to talk about it.”

“If I'm working on a paper banging away on my typewriter, I have other things on my mind. I'm not shucking and jiving in the prison yard” —‚ and most prison administrators support that view. “They understand it's makes prison a safer place if you have a group of guys with their eyes on the prize who are trying to change themselves.”

John J. Lennon arrived at Attica in 2004 with a 9th grade education, but in May will graduate with a two-year associate degree. Attica creative writing workshops have changed his life.

“I came into prison looking up to gangsters, now I look up to scholars and intellectuals like Doran Larson, Tim Golden, Bill Keller, Nicholas Kristof, all these Pulitzer-winning journalists.  Education has changed the lens through which I view the world, I don't look up to gangsters anymore. I think it's a disgusting lifestyle.”

Hamilton College professor Doran Larson has been teaching creative writing workshops at Attica since 2006. He says the demand for education from inmates is enormous and that it’s “almost impossible to create a program large enough to satisfy the desire which pushes against the public perception that people inside aren’t interested in education.”

Thoughts on prison education have changed over the years. Until 1973, there was an era of rehabilitation in American prisons. Even after that year, college degree programs were available for inmates nationwide until 1994, when the country's movement to get tough on crime made prisoners ineligible for Pell tuition aid. “We have moved to a punishment mentality,” Larson says. No one cared about these people “as long as they are kept from the outside.”

Larson contends that inmates want to become productive members of society. The prison population is “an enormous untapped resource, both entrepreneurial and intellectual. And right now there is not nearly enough being done to tap into skills which can get them off the public dole and turn them into taxpayers.”

The numbers seem to bear out his case. Larson says it costs New York about $60,000 a year per inmate incarcerated. A two-year degree costs $10,000 and reduces recidivism chances by 75 percent, he says.

Imagine the savings you could plow back into state tuition.

This story was adapted from an interview on the PRI radio show To The Point.