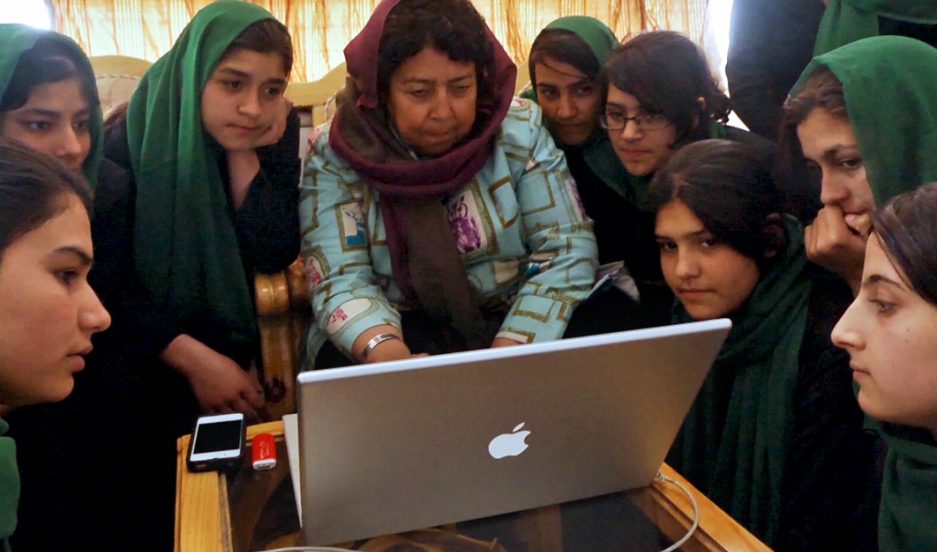 DEH’SUBZ, Afghanistan — Razia Jan grew up in an Afghanistan that is very different than the one that exists today. The country of her childhood gave universal, compulsory, free education to both boys and girls.

Razia remembers a time when a forward-thinking government ruled, when Kabul was a cosmopolitan city (“Southeast Asia’s Paris,” she calls it), and when women could enjoy simple pleasures like bike riding or picnics in mixed company. It was a time before the modern-day Taliban and its draconian views about women and education.

“We were respected, and we were listened to,” remembers Razia, 70. “Our word meant something in the family. It didn’t matter how little you were; if you had to say something, they would listen. That is what I want for girls today — to have that freedom to express their view.”

In 1979, while Razia was in the US visiting an older brother studying at MIT, Russia invaded Afghanistan. As that conflict dragged on for a decade, turning into a civil war and then the Taliban takeover, what Razia intended to be a month-long visit to America became the beginning of a new life. Relatives and close friends advised her to stay away.

“Many times I wrote to mullahs who were in Iran or Pakistan and asked if it was okay to go back,” Razia says. “And they said, ‘Don’t even think about it. They’ll kill you.’”

She began her own studies in childhood education at Harvard University, married, settled down in Massachusetts, started a tailoring business and raised a son.

Three decades later, the events of September 11, 2001 changed Razia’s perspective on the two countries she had called home and her role in each. Razia could not find enough ways to express her grief over the tragedy, her compassion for victims, and her distress at seeing Islam — the religion she had peacefully practiced all her life — being manipulated for evil purposes.

When explaining why she eventually decided to return to Afghanistan to help children there, Razia credits the heroes in New York, who ran towards unknown danger to protect the innocent.

When she heard a Red Cross representative say that blankets were needed for rescue workers, Razia bought $500 worth of fleece and made 25, sending them to a ladder company with a note that said, “we are praying for you.”

Then came a call to action from her home country.

“A friend of mine told me, ‘wherever I go in Afghanistan, I see girls and boys who don't even have shoes on their feet,’” Razia remembers.

With the help of her community of Duxbury, Massachusetts, she spent the next four months gathering 30,000 pairs of shoes to send to Afghanistan. She coordinated with the US Air Force to have them delivered.

As more news trickled in about the poverty and hardship of Afghan widows, children and refugees, Razia decided to return to her home country for the first time in 38 years. She brought with her 12 suitcases full of blankets, clothes and toys for local orphanages.

When she saw the particularly harsh treatment of girls in these orphanages — many were even denied toys so that the boys could have them — Razia felt a calling to do the one thing she believes will one day save Afghanistan: educate the country’s daughters.

The Taliban had effectively stripped away girls’ and women’s right to education, employment, health care and freedom of movement—effectively segregating them and subjugating them in every aspect of Afghan life. Razia knew the first step to restoring any hope for a better quality of life for women had to begin with schooling.

“By providing girls with an education, we could give them a ray of hope to protect them from the vicious cycle of poverty, malnutrition, and hunger,” she says. 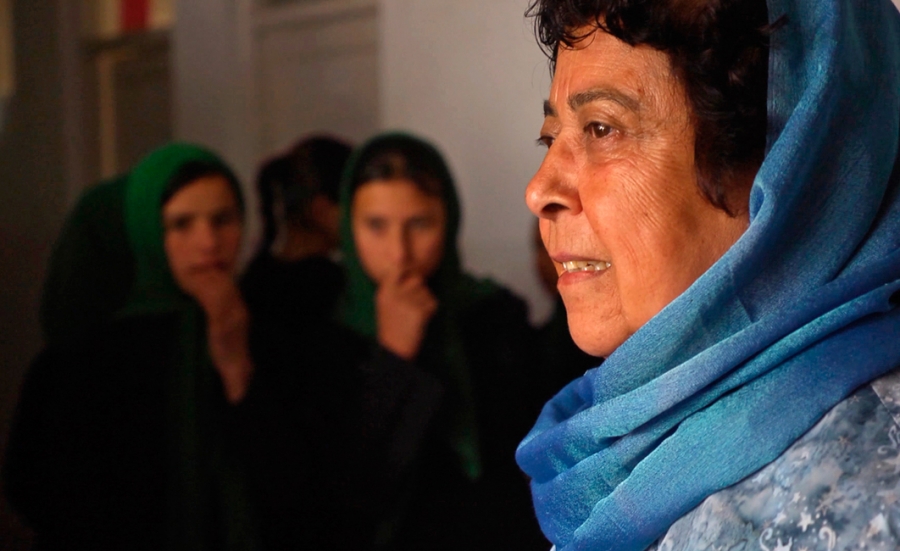 Razia Jan greeting students as they arrive in school at the beginning of the day.

Razia chose a site in the conservative village of Deh’Subz, on the outskirts of Kabul Province, which had held strong against radicals and kept the Taliban out.

“I chose this site because these were not terrorists. They were mujahideen who had fought the Russians and the Taliban,” Razia says. While the Taliban had terrorized the community with kidnappings and extortion, they had never been able to gain a stronghold here.

She put family ties to good use to have a plot of land donated — land that had once been the site of a boys’ school but in more recent times had become the village dump; and a grant from her local Rotary Club, where she had been a member for three decades, made the bricks and mortar possible. With that, she built a new school, the very first for the village girls there, and the only free private primary education facility in the country.

Even as the Zabuli Education Center opened in 2008, local and regional authorities clamored for the beautiful new building to be a boys’ school instead. Razia refused. When a protester argued that the boys needed the school more because men are the backbone of Afghan society, Razia responded, “And do you know what the women are? Women are the eyesight of Afghanistan, and, unfortunately, you are all blind.”

In the beginning, some girls came with their entire families, some with a skeptical father or a fearful mother, and some showed up alone. Razia, the principal, welcomed them all and sorted them into classes by their previous education — meaning that older girls who could not even write their names sometimes sat side by side with children several years their junior.

The teachers’ role goes beyond academic instruction. Many of the girls have never been asked their opinion about anything, never been allowed to speak unless spoken to, and have never been treated with respect. Instruction focuses on traditional academic subjects like reading, math, Dari, and study of the Quran, and also includes English, computers, and life skills classes.

In a country where education in general — and girls’ education in particular — is fraught with the challenges of limited resources, hostility, and a scarcity of qualified teachers, the Zabuli School’s curriculum is exemplary.

One official from the Afghan Ministry of Education said of the school, “It is perfect.”

Much of the time, cultural traditions pressure girls to stop going to school. Razia has seen a 10-year-old girl forbidden to continue her studies by the boy to whom she has been betrothed. She has seen a father so conflicted about schooling his daughters he allows just one to come as a test case before considering sending the others. She has seen an aunt who insists she must keep a 12-year-old niece home to do chores. 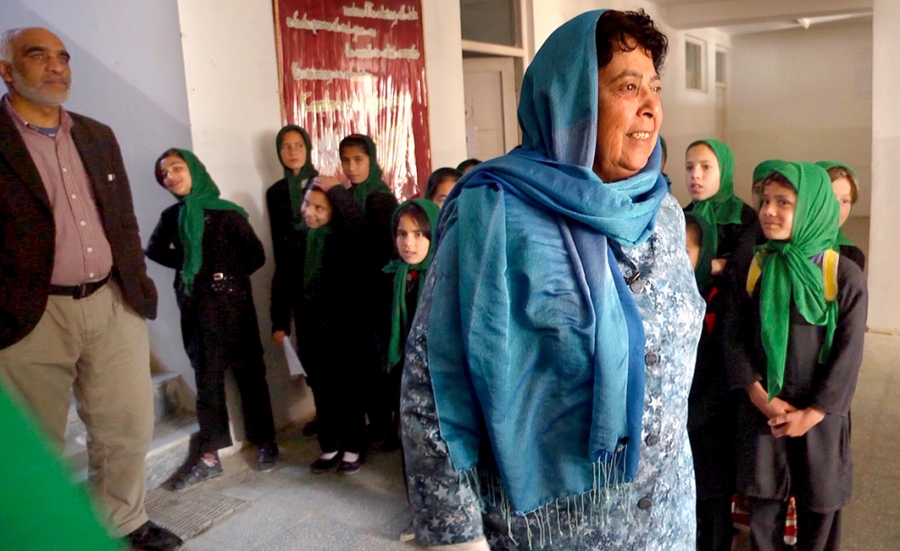 Razia Jan waiting to greet students as they arrive at the beginning of the school day.

Razia handles it with grace and ingenuity. She negotiates for the betrothed girl to continue school (that she will feed the girl for free is no small factor), she teaches the first daughter allowed to attend to write her father’s name so as to inspire his pride and respect, she knocks on the aunt’s door to plead the case of the child.

Razia encourages the girls to stay in school as long as they possibly can, but she also reminds them that everything they learn, no matter how many days or years they study, becomes a part of them that will better their lives.

“No matter how little you know,” she says, “no one can take it from you.”

In order to ensure the school’s continued success, security must be considered in every aspect of its operation, especially in light of Taliban attacks on other girls’ schools around the country.

Each morning, the school’s principal tests the water to make sure it’s safe — water at other schools has been poisoned. High walls surround the building and the playground. Guards protect the school 24 hours a day, 7 days a week. And even with these precautions, there is always an element of fear.

“As the security situation is so fragile in Afghanistan, you never know what tomorrow brings,” Razia says.

Through kindness, diplomacy and generosity with the community, Razia has built a strong alliance with the village elders whose support of the school is critical to its security. Razia tells them she would lay down her life to protect the girls — and she would expect every one of them to do the same.

Despite the challenges Razia has faced, the Zabuli School is thriving. There are 450 students, and local leaders send their own daughters — a powerful endorsement in a conservative village.

Without question, girls' education is the biggest success story of America's involvement in Afghanistan. During the Taliban reign, virtually no girls were in the classroom; five years ago there were an estimated 2 million girls in school, and today there are close to 8 million, according to the Ministry of Education.

Razia is grateful to the American soldiers who risked their lives to oust the Taliban, and she trusts that the US will stand by the progress it played a key role in. With most troops gone now and many private organizations following in their wake because they no longer feel secure, Razia is determined to continue what she started.

“I’m not going anywhere,” she says.

In November, at the end of this school year, Razia will hand out diplomas to the first seven students to graduate from the Zabuli School.

“It is so powerful for me to look at that and feel, ‘Yes, there is a success in these girls’ lives,’” she says. “That will be the happiest day of my life.”

This story by Beth Murphy is one of three stories profiling the Zabuli Education Center included in Foreverstan, a new reporting series from The GroundTruth Project. You can read Beth's stories and the rest of the project's work here.