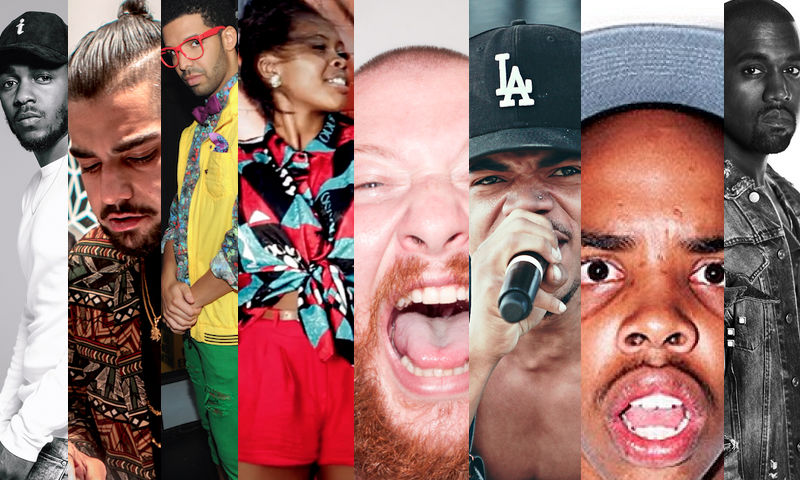 By all measures, 2014 was an unremarkable year for hip-hop, which Kurt Andersen (friend ofsideshow)recently called"the last genuinely new and consequential invention of American pop culture." Hip-hop deliveredfewthrilling singles,fewernoteworthy collaborations, and nary amajor release by its freshest, mostpopular practitioners.Never thebest judgeof these things, the Grammys seemed to think Eminem had the most important rap album of 2014--- his competition ranged form an admittedlyfancy Australianto arealty TV show hostto a guy who used aWu-Tang name generatorto come up with his pseudonym. If it weren't forRun the Jewels 2, the entire year would have been a write-off.

From the ball drop, 2015 promised to be different. As if acknowledging the disappointment of the preceding 365 days, Kanye West introduced "Only One" to the world the second we popped champagne. The love letter to West's daughter was pure sentiment, devoid of a beat, and relied mostly on what sounded like a Fender Rhodes played by some guy named Paul McCartney. Yeezus' new album,So Help Me God,should be here before summer, and we've already had another two collaborations with Macca--- one featuringlots of fire, and the otherpure denim.

With all hullabalooabout Sir Kanye and Paul, it was easy to missSremmLife, the debut long player by Rae Sremmurd that came out the first week of thisyear. Anumberof the album'strackshad been circulating online for months, but the full length provedSwae Lee and Slim Jimmy (brothersKhalif Brown and Aaquil Brown) were more than surprisingly young and talented artists with unmistakable voices --- it proved they were here to stay.

If You're Reading This It's Too Drake

On February 12, Drake uploaded an unannounced short film to YouTube.Junglefeatured snippets of a few new songs and--- for 24 hours --- fans relished the opportunity to preview, ponder, and anticipate. The next day, he dropped anentire collection of new music, making a world of excitedValentines collectively swoon.

If You're Reading This It's Too Lateisn't quite a Drake album (it lacks histraditionallyshinysingles) and it isn't quite a mixtape (it costs money on iTunes), but no one's getting caught up in the taxonomy. Go stand on the busiest street corner in your neighborhood, and I can almost guarantee you'll hear "Know Yourself," "Energy," or "Use Me" blasting out of a passing vehicle before you get bored of trying.

Oh, and bet money on seeing another Drake release before the end of the year.

Heems fans are a patient people. The former Das Racist rapper moved to Mumbai to work on his debut solo album in 2012. Then came some significant delays. It's not like he wastotallyquietin theinterim, but you couldn't help but wonder if Dr. Dre would put the finishing touches onDetoxbefore Heems completed his spiritual quest.

Heems wins. Not only isEat Pray Thugalready the best-titled rap album of 2015, but it's the most political and deeply personal, too. And well worth the wait.

Let's Hear It For The Tink

Tink, the 19-year-old rapper slash singer slash actress from Illinois, is readying her debut album for release later this year, but she released"Ratchet Commandments" earlier this month to prove that she's aiming for nothing less than prophet status. Tink preaches plenty at women on the song, but saves some real fire for the men, too. If that third act flow sounds seasoned, it's on account of three years of promising mixtapes noticed by Los Angeles production unitFuture Brown, New York metal-pop duoSleigh Bells, and known kingmaker Timbaland, who openly admits todreaming about her.

I'm the biggest hypocrite of 2015
Once I finish this, witnesses will convey just what I mean
Been feeling this way since I was 16, came to my senses
You never liked us anyway, fuck your friendship, I meant it
I'm African-American, I'm African
I'm black as the moon, heritage of a small village
Pardon my residence
Came from the bottom of mankind
My hair is nappy, my dick is big, my nose is round and wide

Kendrick came out swinging with "The Blacker The Berry" early last month. Then, withvery little advance notice, he releasedTo Pimp a Butterflytwo weeks ago.It's a hot 80-minute jazzy, funky, genre-bending mess of racial politics, poetry, anger, and hope. KingKendrick may not be the most commercially appealing rapper out there, butTo Pimp a Butterflyproves he might be the most ambitious. Oh, and he absolutely killed it onColbert.

If You Want To Destroy My Sweatshirt

It's not getting any easier to be a young black man in America and Earl Sweatshirt comes to terms with thatsorry state of affairsonI Don't Like Shit, I Don't Go Outside.In just under 30-minutes the 21-year-olddelivers angst and deep introspection over warm, understated beats. Earl'ssilky smooth flow is the finest it has ever been--- especially on "Mantra" where it weaves in, under, and over the very gunshots that set off a wave of racial discord last year.

If hip-hop circa 2010 had a superhero, his name would be Action Bronson. The Albanian rapper from Queens was a gourmet chef by day and a wonderfully profane lyricist by night. Skipping ahead a few years, he doesn't have a day job, but he's stillhis own bouncer. He alsohas a half-decent web series with an obscenelyamazing name. After almost a decade of mixtapes and antics, Bronson dropped his first major label release this month. It's aptly titledMr. Wonderfuland longtime fans will be glad to discover he hasn't changed a bit. He's justeasier to findnow.

Chance the Rapperhasn't released any new music in 2015, but he will. It iswritten. It might arrive under "The Social Experimen"t, but it will be Chance-y and it will be great. It will compliment a year that has already been a remarkable one for rap--- one with no shortage of characters, diversity, ambition, singles, concepts, politics, protest, and pop. And that's not to mentionWale,Ludacris, 50 Cent, Snoop, A$AP Mob, The-Dream, Big Boi, FrankOcean, Pusha T, and Lil Wanye, who all apparently have albums on the way this year.Maybe even Andre 3000. Maybe even billionaire headphone sage Dr. Dre!

There's so much good hip-hop out and incoming in 2015, it's getting easier and easierto forget a bunch of it even happened. Don't. Because 2016 will probably suck.