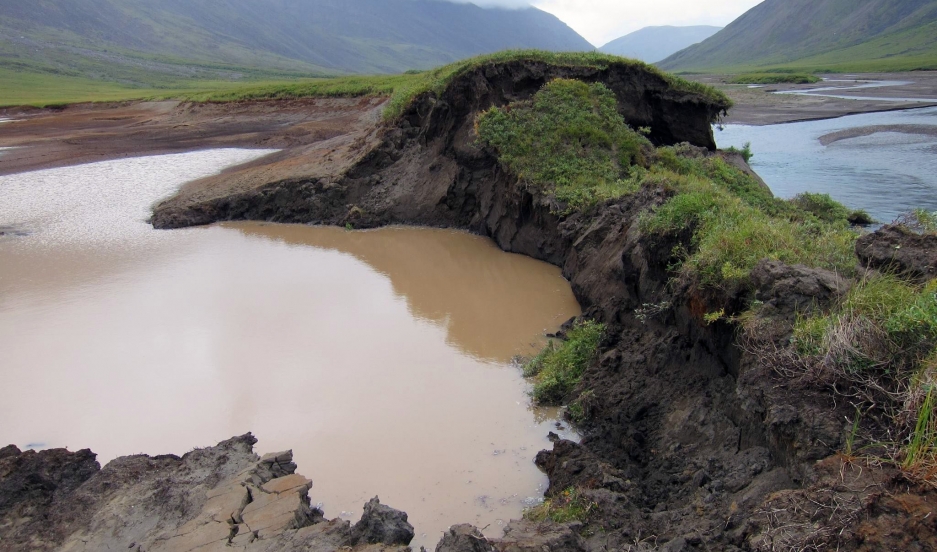 A bank of this lake thawed in the Gates of the Arctic National Park in Alaska, allowing the Okokmilaga River to cut through and drain it to sea.

As you might guess from its name, you don't ever want permafrost to thaw out.

Permafrost is like the world’s refrigerator, says Janet Jansson, a microbiologist and division director of biological sciences at the Pacific Northwest National Laboratory in Richland, Washington. It encases and preserves organic material, including twice the amount of carbon that's currently in the air.

But when it thaws out, microbes frozen in the permafrost kick back into action and produce greenhouse gases like methane and carbon dioxide. Two papers out recently in Nature and Nature Climate Change discuss how those microbes could contribute to global warming.

Studying these microbial communities and how their activity could contribute to climate change is one of the main reasons that Jansson entered her field. Part of Jansson’s research covers permafrost thaw sites in Central Alaska.

“It's quite interesting, because [in] that area you can see it transition from the frozen permafrost all the way into the completely thawed bog scenario,” she says.

Methane is the more potent greenhouse gas, Jansson says, and therefore particularly problematic in the bog scenario. That's where there's a lot of organic carbon available to provide material for methane-generating type species.

The microorganisms and the processes are complex, but in the worst-case scenario, Jansson says, the microorganisms would transform huge amounts of carbon into carbon dioxide and methane to accelerate climate warming.

“We can see signs of that occurring already," Jansson says. "And since there is so much organic carbon stored there, it's almost like ... Earth's compost repository."