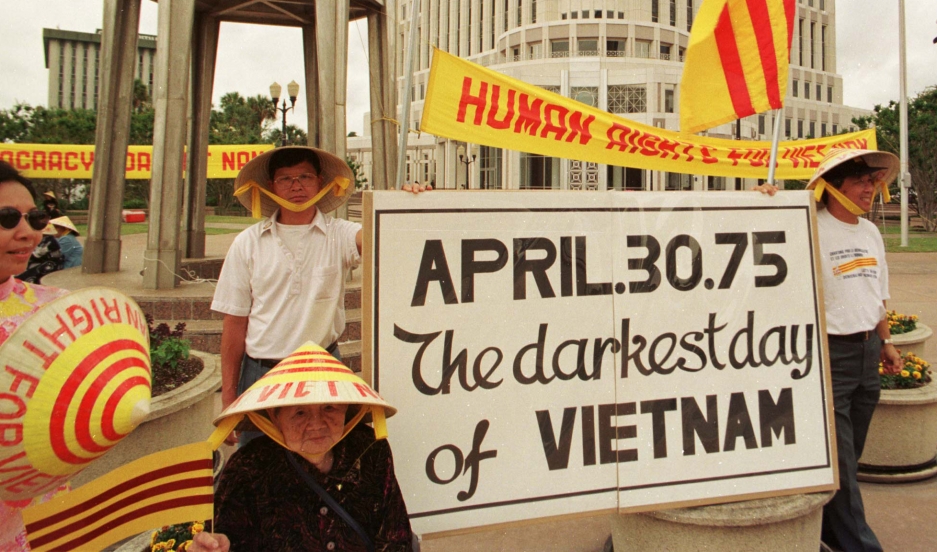 Several dozen Vietnamese demonstrators protest against what they described as human rights violations in the former South Vietnam on April 30, 1998 at city hall in Orlando, Florida.

One of the most enduring images of the Vietnam War is its final one: The last helicopter taking off from the American embassy in Saigon on April 30, 1975, with would-be refugees clinging to the landing skids.

Just two days before that, at the age of 11, Andrew Lam escaped Saigon. Along with his mother, his older sister and his grandmothers, he flew to Guam and then to Camp Pendleton, a Marine Corps base near San Diego.

They were some of the first refugees to arrive in the United States after the war, and the very first to arrive in Daly City, a town just south of San Francisco where Lam’s aunt had opened the area’s first Vietnamese restaurant.

Lam is now a celebrated journalist and author of books like "Perfume Dreams." But when he arrived in 1975, he spoke only Vietnamese and French, and his disorientation is written into a story called "Show and Tell," part of his recent collection, "Birds of Paradise Lost." In that story, Cao Lung Dinh, a young Vietnamese refugee, arrives in a sixth-grade classroom just after the end of the war.

Like Cao, Lam says he encountered "some racism," but that the American media coverage of Vietnam made him an object of fascination.

"It was the first television war in America," Lam explains. "So the kids, even though they didn’t know much about Vietnam, they saw images of it nightly with Walter Cronkite. And here I was, this kid that was at the other side of the TV set emerged into their classroom. So they were really fascinated."

Lam now lives at the north end of San Francisco's Mission Street, in a luxury building that feels quite far from his beginnings in Daly City. And while his current residence is only 10 miles from his original Bay Area neighborhood, he hadn’t seen that first house in 34 years — until a recent visit.

While the tech boom has sent real estate prices skyrocketing across the Bay Area, Daly City hasn’t strayed too far from the working-class, immigrant roots that Lam remembers. "When we got here, there was a mixed group of people, which is always the case of Daly City," he says as he strolls his old neighborhood. "Black, Filipinos, Samoans, Nicaraguans ... it was an extraordinary America that welcomed me."

When they arrived in 1975, Lam and his family first lived in an apartment above the Vietnamese restaurant owned and operated by his aunt — an apartment that, at one point, housed 16 of his family members. Lam’s aunt eventually sold the restaurant to his mother, and his family spent the next four years there. They left when they bought a house at the south end of Mission Street in 1981. 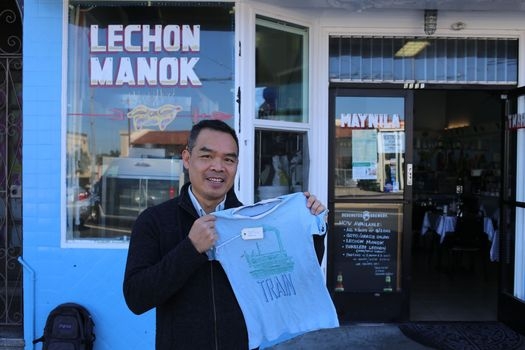 Andrew Lam stands outside the restaurant his aunt and mother onced owned and operated in Daly City, California.

​"I remember when we bought that house," Lam says. "We were so happy because we had become a middle class, American family within three to four years time in America. ... We were not just a people fleeing anymore — we were people who slowly had roots embedded in America."

The old family restaurant is now called Manila Restaurant, owned by a Filipino family. Over two plates of Filipino barbecue and rice, Lam explains how his own life experience sometimes collided with the strong anti-war movement in the Bay Area.

"There were a lot of anti-war people in this country," he recalls. "Back then, I wouldn’t have wanted to talk with them, because the American withdrawal from Vietnam basically caused South Vietnam to fall apart. It’s fine to be anti-war, but what about the people you encourage to fight and then abandon in the middle of the battlefield?"

He ran into the same problems at the University of California Berkeley, where he went to college. "People [romanticized] Ho Chi Minh, whereas I regard him as the cause of my own suffering," he explains.

For many refugees, that suffering made talking about life in Vietnam difficult, if not impossible. But not in Lam’s family, at least when it came to the war and its aftermath.

"I’m really lucky because my parents were in sort of leadership positions; they were public figures," Lam explains. "So for them, articulating about history, about what happened, is kind of normal. But I’ve run into kids, Vietnamese kids who were born in this country, who read my book and came up and said, 'I really want to thank you for writing this book because now I know what it’s like for my parents. They never talk about it.'"