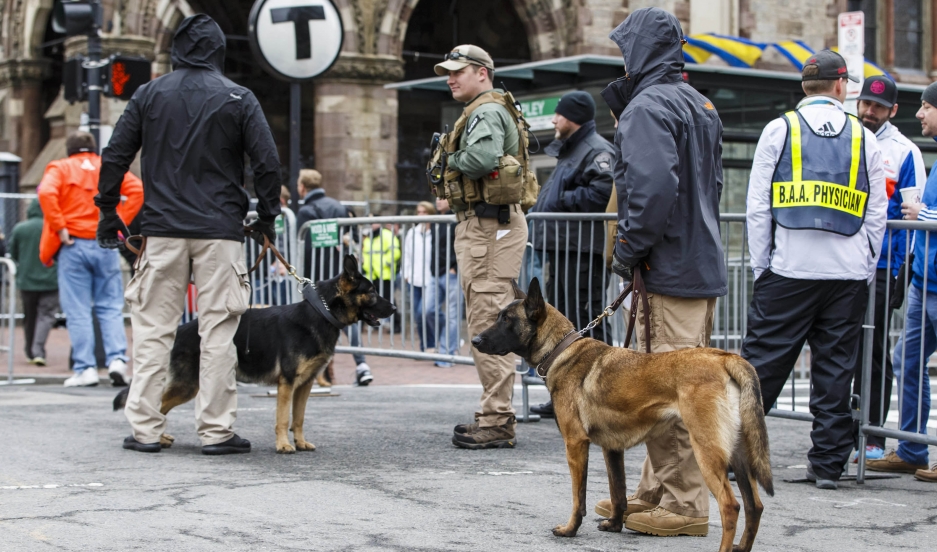 Security personnel stand along Boylston Street near the finish line of the 119th Boston Marathon, held on April 20, 2015.

Monday marked the 119th running of the Boston Marathon, and just the second since two bombs exploded at the race's finish line in 2013.

While the attack forever changed the cherished race, WGBH reporter Phillip Martin says the scene at the finish line this year was quite different than last year's race.

"[The mood] was a little subdued," Martin says. "It hardly matches the type of mood that accompanied the one-year anniversary, where folks felt defiant. Today, they were here to watch the race with a mixture of reflection on what happened in 2013, and to see folks coming into the finish line as they’ve watched this race for over 100 years."

No matter the mood, security was still on everyone's mind. The bombings led to heightened screenings and safety measures at many sporting events in the US and even Canada, but the bombing has actually played a relatively small role in the national conversation on security and policing, says Juliette Kayyem, a former assistant secretary of homeland security.

“It wasn’t the Boston marathon that changed [government policy], it was actually Ferguson,” she says, “One important change that's starting to be made is that the distribution of military-type equipment can only go to departments with dedicated SWAT or military-like teams.”

That change will take a couple of years, Kayyem says, but it’s an important step forward.

You can listen to Kayyem’s discussion about this and other security matters with the likes of former Boston Police Comissioner Ed Davis and Michael Chertoff, who served as secretary of homeland security under George W. Bush, in her new podcast, “Security Mom.”