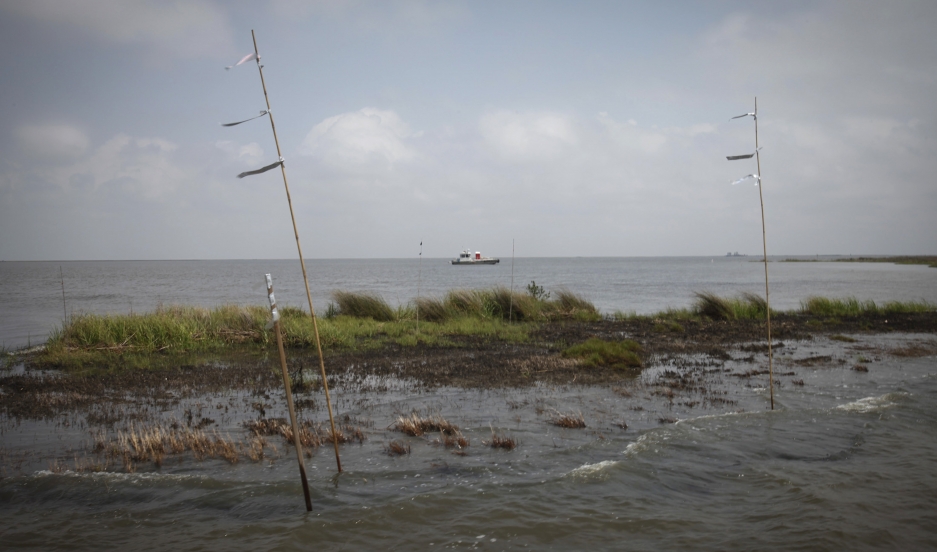 A work boat passes an oiled marshland one year after the Deepwater Horizon oil spill in Bay Jimmy near Myrtle Grove, Louisiana.

It's been just over five years since the Deepwater Horizon oil rig in the Gulf of Mexico exploded, killing 11 workers and spewing 200 million gallons of crude oil into the Gulf. And today, scientists are still trying to figure out the effects of the "toxic clouds" the spill unleashed.

For three months, oil sprayed from the well in the seabed below. As it rose to the surface, plumes of toxic chemicals and oil droplets drifted to different depths of the seawater and eventually floated to the continental slope, where ocean depths fall dramatically from a few hundred feet to a few thousand.

“The good news is that it’s recovering,” says David Hollander, referring to the amount of oil in the sediments at the bottom of the drop-off. Hollander is a marine chemist from the University of South Florida who is studying the long-term impact of the catastrophe.

But how do they know? "The clues actually come from the fish themselves,” Hollander says. Elements from the oil are metabolized by the fish, so by measuring their livers and bile, the scientists can determine how much of the toxins are still in aquatic food sources.

“We’ve seen a decline since 2010 and 2011 of about 30 to 50 percent,” Hollander says, "but we are still seeing the persistent contamination of the food that fish are actually consuming, especially those that are associated with the bottom,” such as red snapper and grouper.

But it's not all positive: “The bad news is that it’s still pervasive in the area and we don’t have an exact understanding of how long it will last," Hollander says.

The rest of the gulf — including the marshes, beaches and oyster beds — is still in recovery. The oysters were most affected by the response to the spill, in which the floodgates of the Mississippi River were opened to push the oil offshore. Oysters require a specific salt content in the water, and they suffered when fresh river water flooded the area. Hollander says they’ve come back in some locations, but not others.

“The beaches themselves look pretty good,” he says. But overall, he says, the disaster created a complex series of chemical reactions that continue to this day. “This oil has a fate and it does end up in the sediments and it is affecting biological systems. ... There is a consequence and ultimately there is an economic impact of this.”