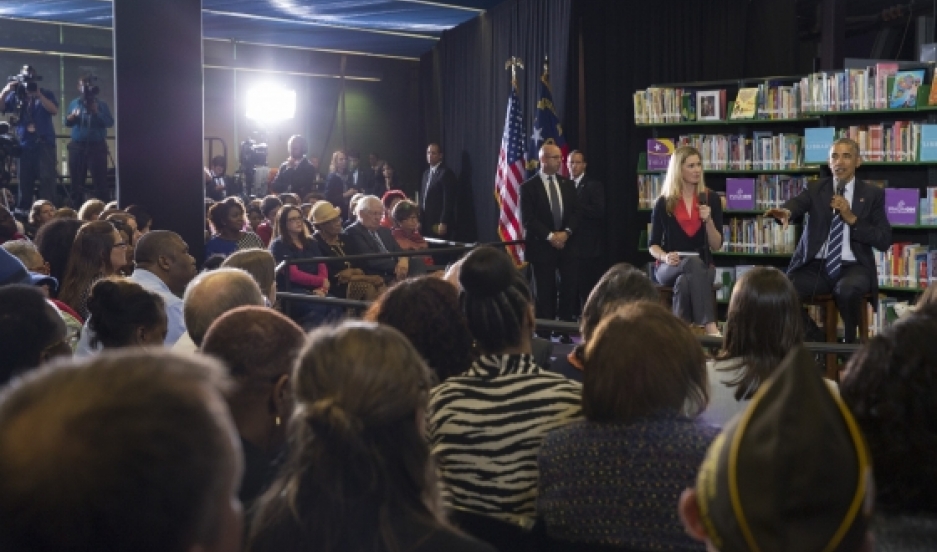 President Barack Obama participates in a Town Hall with BlogHer and SheKnows Online communities at the Spangler Library at ImaginOn in Charlotte, North Carolina, on April 15, 2015.

President Barack Obama spoke at length on gender wage inequality at a town hall organized by the women's blog network BlogHer and SheKnows Media (full disclosure: SheKnows is a media partner with Across Womens Lives). Held the day after “Equal Pay Day” on April 14, it was a nod to activists' work to raise awareness of the issue, and to the kind of feminist netroots Blogher represents.

Obama's remarks were focused on his economic policy and budget. He dusted off some old campaign lines advocating tax breaks for the middle class, touted his personal story of being raised by a single mother with support from his grandmother — the "main breadwinner in the family" — and defended the Paycheck Fairness Act, a Democrat-backed effort to address the pay gap.

"Understand that the whole point of equal pay is people doing the same job and getting paid less," Obama said. "That's the problem. The paycheck fairness act would say not that women should get paid more or the same if they are doing less work. It's saying hey should get paid the same for the same work. Now, this should be a no brainer."

But there was something missing.

Like most advocates on gender pay inequity, Katherine Gallagher Robbins, the director of research and policy analysis at the National Women's Law Center, was pleased to hear the president. While the conversation was broad — it lasted more than an hour — one group of women who face particularly harsh obstacles when it comes to workplace discrimination weren't mentioned: transwomen.

Ideas to address the pay gap

If the women in your office don't make as much as the men, here's what to do about it

Multiple studies have indeed shown that LGBT people suffer discrimination in the workforce, and the problem is more acute for transgender people. A review of more than 50 studies conducted by the Williams Institute at UCLA in 2007 showed that between 15 and 57 percent of transgender people report having experienced employment discrimination.

The National Center for Transgender Equality has also conducted its own research. In a survey of more than 6,000 people who identify as transgender, they found grim economic numbers. Respondents were nearly four times as likely to have a household income of less than $10,000 a year when compared to the general population. Forty-seven percent said they had been fired, not hired, denied a promotion or had experienced some other adverse situation at work because of being transgender or gender non-conforming.

“A lot of our folks area facing underemployment, unemployment in the workplace, and are being discriminated against and not necessarily being promoted,” says Raffi Freedman-Gurspan, a policy advisor for the racial and economic justice initiative of the NCTE. “So all of the issues that are raised around women's workplace discrimination and wages, I would say, are heightened for transgender people.”

While Freedman-Gurspan says more research needs to be done, anecdotally she believes the problem is even more severe for transgender people of color.

Freedman-Gurspan praised Obama's speech during the town hall April 14. She sees it as a good thing the president is devoting time to discussing gender wage inequality, but she thinks it's important to remember how much these same issues affect transgender people.

“I would say that what we would encourage the president and like-minded individuals to always remember is that for transgender people, we are at the bottom of the economic ladder in many respects,” she says.

Still, the priority for transgender people right now isn't wage equality, but passing anti-discrimination laws. At the federal level, attempts since 1994 to pass the Employment Non-Discrimination Act, which would protect LGBT people, have failed.

In the absence of government action, many large companies have added anti-discrimination measures to their own employment policies. And activists have turned their attention to passing anti-discrimination laws at the state level. This map from the Movement Advance Project shows the 19 states that currently have such laws on the books:

Transgender advocates are focused on increasing that number and helping to create conditions where transgender people can get and keep good-paying jobs, regardless of their sexual identity.

“For transgender people right now in states where there are no protections, well, we can talk about wages, or we can talk about the fact that I am just going to lose my job regardless of what I am going to be paid,” Freedman-Gurspan says.