Illegal migrants stand in an immigration holding centre located on the outskirts of Misrata, Libya, on March 11, 2015. Italy wants Egypt and Tunisia to play a role in rescuing stricken migrant vessels in the Mediterranean.

During research for his upcoming book, Notre Dame professor Maurizio Albahari came across a young Afghan refugee. The boy was only 15 when he fled the Taliban, making his way to Iran, then Turkey, then Greece and finally to Italy.

"He made the crossing to Italy on a ferry by hiding himself in a truck," Albahari explains.

Because he was a teenager, the Italian authorities first housed him in an orphanage. Later they decided to hand over his legal guardianship to a Catholic priest. Today, Albahari says, the Afghan works for an NGO in Italy, assisting other migrants who arrive there.

Despite the threat of the Taliban, the long journey to Italy and the decade the boy spent collecting the money to escape his home, Albahari says he's one of the lucky ones. Albahari has collected numerous stories for his book, "Crimes of Peace: Mediterranean Migration and the World's Deadliest Borders," that have ended far more tragically.

Each year, tens of thousands of men, women and children risk their lives by crossing the Mediterranean in an attempt to reach Europe. Those numbers skyrocketed last year as Middle Easterners fled the Syrian civil war and other hotspots of violence. According to the BBC, almost 10,000 refugees were rescued in recent days, while more than 500 people have died making the journey since the start of this year alone.

And getting to Italy is only the start of the hard journey for these migrants. 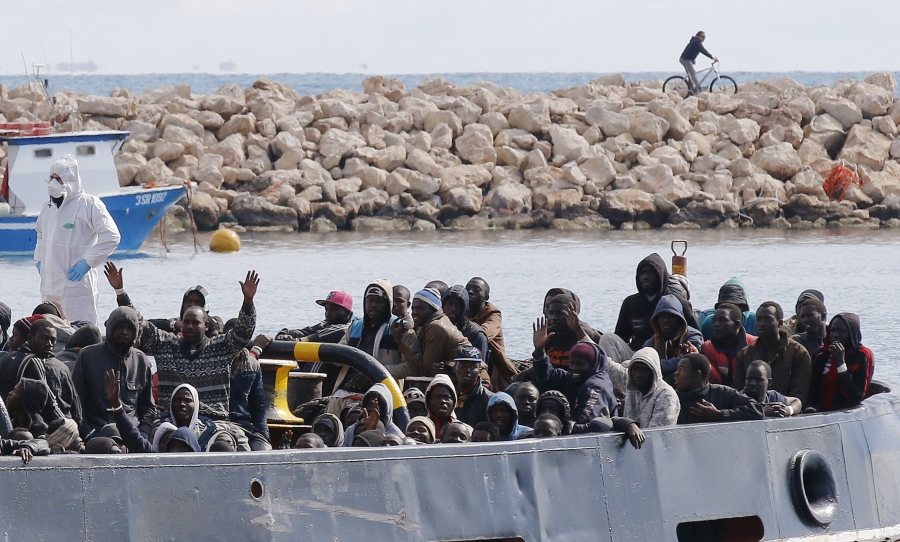 Migrants arrive by boat at the Sicilian harbour of Pozzallo, February 15, 2015.

"There's probably no greater controversy right now in Europe than who gets to be a European," says Joel Millman of the International Organization for Migration. And each country has a different take on the problem.

In Italy, for example, "quite a lot of migrants, particularly those from Syria, move quickly through Italy by land and they don't stay," Millman says. They go instead to places like Germany, where jobs are easier to come by and where they sometimes have relatives.

That means "Italy considers it a European-wide problem, and Europe considers it Italy not doing its job of stopping these people in the first country they land in," Millman explains.

They can all agree on one thing, though: Every country says it doesn't have the means to take in such large numbers of migrants, pointing to their own financial woes. But Millman believes the EU does have the tools to ease the crisis — but not the political will.

"Turkey, Jordan, Lebanon have all received so many migrants, so many refugees," he argues. "We think that a continent of 500 million people and an economy the size of EU certainly can absorb the numbers that are coming in."

That's what the migrants fleeing poverty and war hope, too.

Tareke Brhane : 'Many people have no option but to leave their country and make the journey across the sea' pic.twitter.com/0tWBjMqfc8