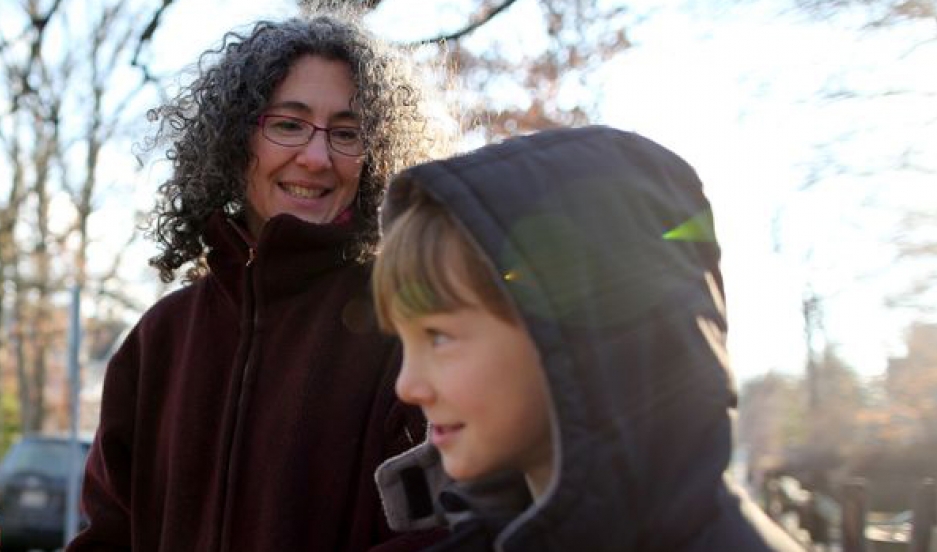 Danielle Meitiv waits with her son Rafi, 10, for Danielle's six-year-old daughter, Dvora, to be dropped off at the neighborhood school bus stop in Silver Spring, Maryland.

On Sunday, six-year-old Dvora Meitiv and her brother Rafi, 10, decided to walk home alone from a park near their house in Silver Spring, Maryland. During the two-and-a-half block walk between the park and their home, a neighbor spotted the kids and called the police.

This wasn't their first encounter with local law enforcement. The pair were picked up last December after their parents, Danielle and Alexander, allowed them to walk home from a different park a mile from their house.

"CPS has finally succeeded in making me terrified to let my kids out unsupervised," Danielle says. "I'm afraid they're going to take them away."

Though the state of Maryland might disagree with Danielle and Alexander, they say providing their kids with a certain amount of independence is a key part of their parenting philosophy, which they call “free-range parenting.”

"It means that we’re giving our children the childhood that we had. It’s the idea that kids can be trusted to go down the block, to play at the park, to walk home from school," Danielle adds.

Peter Gray, the author of “Free to Learn: Why Unleashing the Instinct to Play Will Make Our Children Happier, More Self-Reliant, and Better Students for Life” and professor of psychology at Boston College, applauds the Meitivs.

"My historical research on this question suggests that there’s never really been a time or place in history, aside from times of slavery and intense child labor, when children have been less free than they are today in our society," Gray says. "This is a very, very serious issue.”

Over the last few generations, he says, parents have kept a tighter leash on their kids as time spent on school and school-related activities has increased. The result is less time for freewheeling play, and more mental health problems as children grow older.

Many modern parents feel a strong sense of fear when it comes to letting their children roam alone, despite research that shows that those fears are often unfounded.

“The crime rate is way down, and the crime rate against children is way down compared to, say, the 1970s,” Gray says. “Abduction, murder or the molestation of your child by a stranger when your child is outdoors — these are very, very rare. But of course, whenever they occur, and they do sometimes occur, and people sometimes get hit by lightning too, we all hear about it so we think it’s much more common than it really is.”

Yet many fearful parents fail to realize that by overprotecting their children from the dangers of the outside world, they are putting them “at great risk” for psychological problems, Gray argues, including anxiety and depression.

“When we don’t allow children the opportunity to have the kinds of adventures and free play that they really need for their healthy development, they don’t develop emotionally and socially as healthy as they otherwise would,” he adds.

Over the last 60 years, Gary says there has been a continuous increase in the number of psychological disorders seen in children and adolescents.

“And it’s not just that we are seeing it because we haven’t looked for it before,” he aruges. “Even by standard clinical questionnaires that have been unchanged over the years ... the rate of what would be called ‘major depression’ [among children] is now seven to eight times what it was in the 1950s. This has been a continuous increase.”

Additionally, Gray says that the number of anxiety disorders among children and adolescents has increased five to eight times over the same period.

“If we overprotect kids, if we coddle them and if we don’t allow them the freedoms that they need to develop, then they grow up into young adults who are not prepared for the kind of independence that is required of them when they leave home,” he says.

So do these revelations change things for Danielle and Alexander Meitiv, who have been threatened with losing their children to the state?

“This is traumatic to have this happened,” says Gray, who spoke to the family this week. “The kids are frightened not by the strangers in the park, but by the police who picked them up and kept them in a squad car for a period of time, and then brought them home and threatened their father. That is far more traumatic than anything these kids have experienced out there playing alone in the park.”