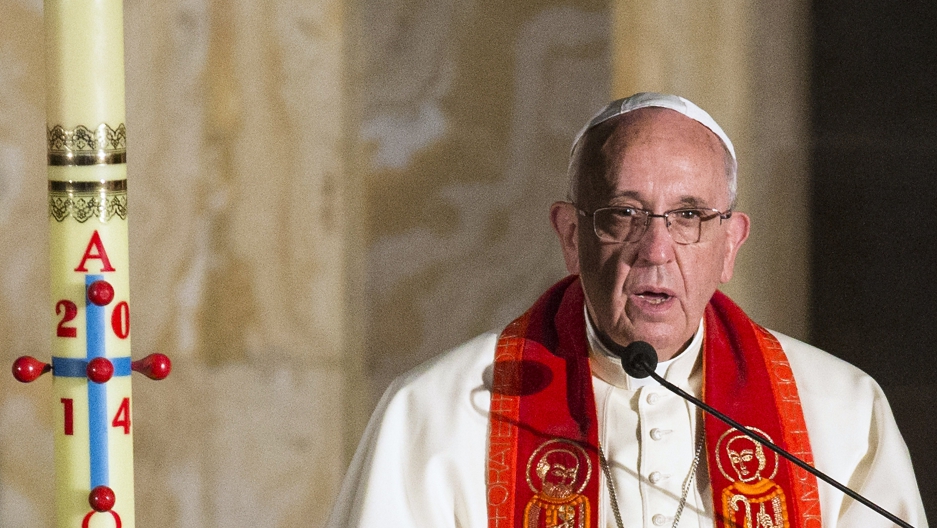 Pope Francis gives a speech during a meeting with prelates, nuns and seminarists at the Church of All Nations in the Garden of Gethsemane, in east Jerusalem, on May 26, 2014. Pope Francis called for people of all faiths to have access to often hotly-contested sacred sites in Jerusalem, on the final day of his whirlwind Middle East trip.
Credit: Jack Guez
Share

Both sides have agreed not to give interviews for 30 days, according to an LCWR spokeswoman.

What a difference a papacy makes.

In a photograph circulated by the Vatican City newspaper L’Osservatore Romano, four sisters sit smiling across from Pope Francis, none wearing habits. The pope also smiles, but made no statement and is not quoted in the documents released by the LCWR, and Congregation for the Doctrine of the Faith, the office that polices theologians and church officials on doctrinal disputes.

“Pope Francis met with them for fifty minutes,” FutureChurch co-founder Sister Christine Schenk told GroundTruth. “We’ve never had the leadership meet in a private office with the pope. That is a very significant valuing of the leadership and the role of women in the church. On balance, there are tremendous positives from this resolution.”

Under Pope Benedict, the CDF announced in 2012 that Seattle Archbishop Peter Sartain would function as LCWR overseer, approving their literature and vetting conference speakers. It was strikingly blunt, scolding the women superiors for “radical, feminist themes incompatible with the Catholic faith.”

The joint statement released today said: “Our extensive conversations were marked by a spirit of prayer, love for the church, mutual respect and cooperation...We found our conversations to be mutually beneficial.”

Behind the happy campfire language lies a twisted trail of gender politics, a bungled CDF attempt at disinformation and concerns of financial repercussions.

Even before Pope Benedict’s resignation, officials in several Vatican offices sensed that then-CDF prefect Cardinal William Levada, had overplayed his hand by installing Sartain to purportedly control the women superiors of orders working in the trenches with the poor and least-served people in American society.

Levada’s feminism accusations went unsubstantiated. However, he faced a blowback of criticism for calling out a scripture scholar, Sister Laurie Brink, whose words he distorted out of context from a speech she gave at LCWR (she was not a member).

Levada has since retired to his native California.

“A broad range of Catholic foundations privately expressed to bishops and cardinals their utter dismay and strong opposition to this wholly unnecessary investigation of women religious,” a prominent philanthropist who spoke on background told GroundTruth earlier this year.

A number of foundations offered assistance, either materially or in advisory capacities, to mother superiors whose communities were selling assets to manage long-term elder care as their numbers declined.

The Conrad N. Hilton Foundation — which has provided major support to National Catholic Reporter for its Global Sisters Report coverage — also awarded $2.5 million to the National Religious Retirement Office, which assists religious communities in America in bridging the gap in retirement fund shortfalls.

Meanwhile, Cardinal Levada, Archbishop Sartain and Toledo Bishop Leonard Blair — a key investigator of LCWR — had all been tarnished with media coverage of their giving soft-glove treatment to clergy sex abusers. Levada had the dubious distinction, while San Francisco prelate, of being the only bishop in America to be successfully sued by a priest who claimed whistle-blower status after Levada removed him from his parish for reporting his pastor to police for alleged advances on a youth.

The archdiocese later paid a $700,000 settlement to the family of the boy. The pastor was never prosecuted. The priest-whistle blower received an undisclosed “preretirement” package.

Officials at several Catholic foundations were skeptical of Vatican charges that the nuns, whose programs they support with grants, were somehow undermining the church. They had women as board members, officials or grant officers who had gotten behind sisters in an era in which the number of parochial schools has gotten smaller, with far fewer nuns in classrooms and many more working in housing projects, health care, drug treatment clinics and rural ministries.

In Rome, Vatican officials who met with several women associated with Catholic philanthropy found themselves in the bizarre position of having to defend, or express privately their disagreement with, the CDF steamroller against the leadership of sisters who had support of wealthy Catholics for their charitable works.

“Many foundations have longstanding familial ties to women’s religious orders, having attended their schools and supported their ministries for decades,” the philanthropist continued. “They were completely outraged that in the wake of the clergy sexual abuse crisis, the nuns were being investigated.”

As the philanthropic community devised ways to assist certain communities without substantial property, they saw the largest umbrella group of sisters accused of disloyalty by the same CDF responsible for laicizing pedophile priests.

The image of nuns immersed in work the poor, homeless and marginalized sharply contrasted with that of bishops who sheltered the sex offenders yet were never punished.

Sartain moved slowly in his role as overseer of LCWR, dealing with nuns well-practiced in the art of dialogue, able to endure long meetings to hash out the real meaning of fidelity to Christ, justifying their choices of speakers, exploring the outer realms of theology that displeased the CDF.

“We’re not going to do any interviews,” LCWR press officer Sister Annmarie Sanders, told GroundTruth. “The CDF requested that its own people, Archbishop Sartain and LCWR — that none of us do any interviews for thirty days.”

“It went out with a whimper,” Professor Margaret Susan Thompson of Syracuse University a historian who specializes in women’s religious orders, told GroundTruth.

“The devil’s in the details and we don’t yet know what they are. ... It seems that those in charge in the Vatican really wanted this thing to go way. I think this a reenforcement of the point that Cardinal [Sean] O’Malley made in his 60 Minutes interview when he said that this has been a P.R. disaster.”

Jason Berry is GroundTruth Project religion writer and author of Render unto Rome: The Secret Life of Money in the Catholic Church.