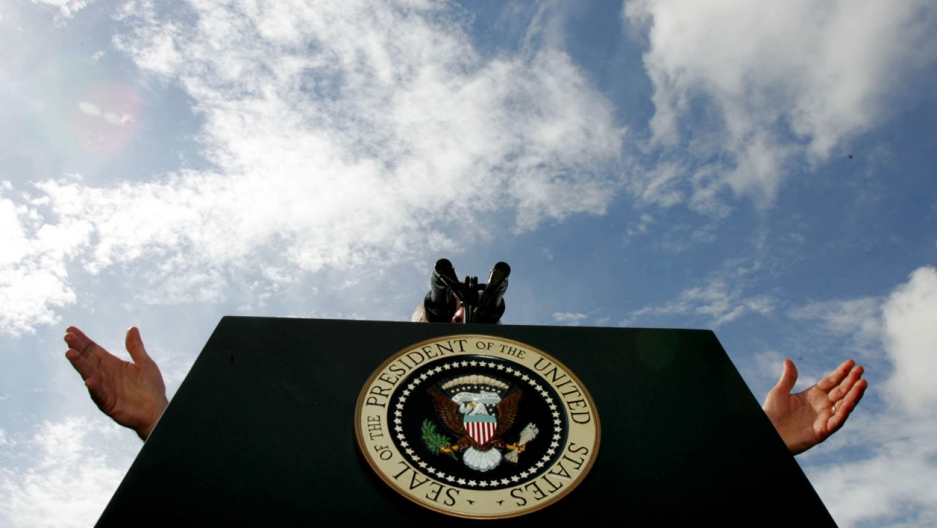 US President George W. Bush raises his hands behind the lectern while speaking at a campaign rally at Sims Park on October 19, 2004 in New Port Richey, Florida.
Credit: Mark Wilson
Share

It's already election season in the United States, and that means it's time to start hearing from people who believe they're uniquely qualified to run America's wars, drones, nuclear deals, trade partnerships, and everything else.

There are already a handful of front-runners. And when it comes to foreign policy, unfortunately for us all, they've each said things that are — to put it gently —  a little out of touch with reality.

Hopefully they'll brush up on world affairs before really hitting the campaign trail. Until then, here are a few of the clueless things that they've said about the rest of the world.

While she was in the Senate, Clinton voted for the Authorization for Use of Military Force Against Iraq Resolution in 2002.

She now says she was “wrong,” but she defended the vote during the 2008 primary elections, and it's dogged her despite an effective stint as secretary of state.

You’re probably used to Ted Cruz saying patently inane things about science and the environment. That’s probably enough to make him unfit to be a world leader.

But even if he believed in climate change, there’d still be his bizarre plan for stopping the Islamic State at the Mexican border, which he explained in a CNN opinion piece.

“First and foremost, Washington should resolve to make border security a top priority finally, rather than an afterthought, of this plan in light of concerns about potential ISIS activities on our southern border, cited in a Texas Department of Public Safety bulletin reported by Fox News. As long as our border isn't secure, the government is making it far too easy for terrorists to infiltrate our nation.”

He also slammed Obama’s approach to fighting the Islamic State by comparing it to his other favorite punching bag: Obamacare. Speaking to Sean Hannity on Fox News, he said:

“Look, it's not our job to be social workers in Iraq and put them all on expanded Medicaid. It is our job to kill terrorists who have declared war on America and who have demonstrated the intention and capability to murder innocent Americans.”

And it’s not just Obama’s foreign policy. He’s got his own version of historical foreign policy before the arrival of his hero, Ronald Reagan.

And this line from his speech at the Values Voter Summit in 2013 in which he explained Cold War policy under President Jimmy Carter:

“Our foreign policy is détente, which I’m pretty sure is French for surrender.”

Détente means “relaxation,” by the way.

Walker’s got a long way to go to convince Republican primary voters that he’s ready to be commander in chief.

The Wisconsin governor built his national profile by targeting organized labor — you know, like public school teachers. So, naturally, at this year's Conservative Political Action Conference (CPAC) he compared standing up to angry public servants to battling the Islamic State.

Just two days later, he once again claimed that union busting was good preparation for foreign policy. During a speech to the Club for Growth, he called Ronald Reagan’s decision to fire 11,000 air traffic controllers during a strike in 1981 "the most significant foreign policy decision of my lifetime" because it “sent a message not only across America, it sent a message around the world… we weren’t to be messed with.”

Again, maybe these are just gaffes. But it’s harder to explain his total bungling of questions about how he’d handle IS during his interview with Martha Raddatz on ABC’s “This Week” in early February.

Rand Paul speaks during a rally at the Desert Vista Community Center on April 11, 2015 in Las Vegas, Nevada.

Paul’s known for being so anti-interventionist in his foreign policy beliefs that some of his critics say he’s more liberal than Obama when it comes to security and defense.

That doesn't mean he's totally focused on domestic politics. For example, he's got very strong feelings about how the Obama administration has understood and dealt with groups like the Islamic State, Boko Haram, Al Shabaab, and other jihadi groups.

Rand Paul is willing to say what he believes nobody else will acknowledge. These groups are united in a "worldwide war against Christianity."

This is what he said at the Values Voter Summit in 2013.

"Today I want to tell you about a war the mainstream media is ignoring. From Boston to Zanzibar, there is a worldwide war on Christianity.
You won't hear much about it on the evening news because the answer is not convenient and does not fit the narrative we have been told about radical Islam. The President tries to gloss over who is attacking and killing Christians. The media describes the killings as 'sectarian.' But the truth is, there is a worldwide war on Christians by a fanatical element of Islam."

It's true that jihadis have targeted Christians, but not all jihadis are the same, and some, like the Islamic State, have targeted just about everyone who doesn't adhere to their extreme strain of Sunni Islam. So, "war on Christianty" doesn't suggest the kind of nuanced understanding of terrorism and religion that you'd want from a commander in chief.

Foreign policy isn't just defense and security, either. How well does Paul get along with others on the world stage?

Let’s see what he says about the United Nations.

"I dislike paying for something that two-bit Third World countries with no freedom attack us and complain about the United States," Paul said during a gun rights event in New Hampshire in January 2015. "There’s a lot of reasons why I don’t like the U.N., and I think I’d be happy to dissolve it."

Rubio has been casting himself as the anti-Rand Paul. He’s all about a bulked-up US military that intervenes smartly and firmly around the world on behalf of American interests, and he’s developed lots of carefully crafted rhetoric to make that sound like a good idea.

And yet, he seems totally unable to understand two of the most critical foreign policy issues facing the United States — the battle against the Islamic States and nuclear negotiations with Iran.

It started in the lead up to the 2015 Conservative Political Action Conference. Speaking to Sean Hannity, Rubio explained his theory about why President Obama hadn’t wiped IS off the map.

“If we wanted to defeat them militarily, we could do it. [Obama] doesn’t want to upset Iran,” he told Hannity. “In [Obama’s] mind, this deal with Iran is going to be the Obamacare of the second term, and he doesn’t want them sending military to the region because they think the region belongs to them.”

That doesn’t make much sense. Iran, like most of its neighbors, doesn’t want to encourage any sort of US military presence in the Middle East, but the Shia-majority country also doesn’t want Syria and Iraq overrun by the Sunni extremists of IS. Sharing a common enemy doesn’t make Iran and the US allies, but there on the same team for this one.

If you thought Rubio’s theory was just a gaffe, guess again — he doubled down on it in March when Secretary of State John Kerry was at a hearing before the Senate Foreign Relations Committee about Obama’s Request for Authorization of Force against IS.

"I believe that much of our strategy with regards to ISIS is being driven by a desire not to upset Iran so that they don't walk away from the negotiating table on the deal that you're working on," Rubio told Kerry. "Tell me why I'm wrong."

"Because the facts completely contradict that," Kerry said. "But I'm not at liberty to discuss all of them here for a lot of different reasons."

We'll see if he sticks to this line once the Republican primary heats up.

Jeb Bush seems like a grown-up. That is, until he does something like tweet the following gem in response to a claim by the National Republican Senatorial Committee that President Obama was closing the US Embassy to the Vatican — a move it called "the latest anti-religion pursuit of this Administration, a slap in the face to Catholic-Americans around the country that weakens America’s position as a global leader."

Why would our President close our Embassy to the Vatican? Hopefully, it is not retribution for Catholic organizations opposing Obamacare.

The State Department explained, as you can probably guess, that wasn't happening. It was moving the embassy to a compound that already housed both the Embassy to Italy and the US Mission to the United Nations. That spot was cheaper, safer, and actually closer to Vatican City than the previous location.

And how's Jeb dealing with having a last name that'll be associated forever with nightmarish wars, secrecy and torture, and disastrous foreign policy?

“I don’t think there’s any Bush baggage at all,” he said on Fox News. “I love my brother, I’m proud of his accomplishments.”

You’ve got to give him credit for refusing to throw his brother under the bus. But seriously, come on, Jeb.