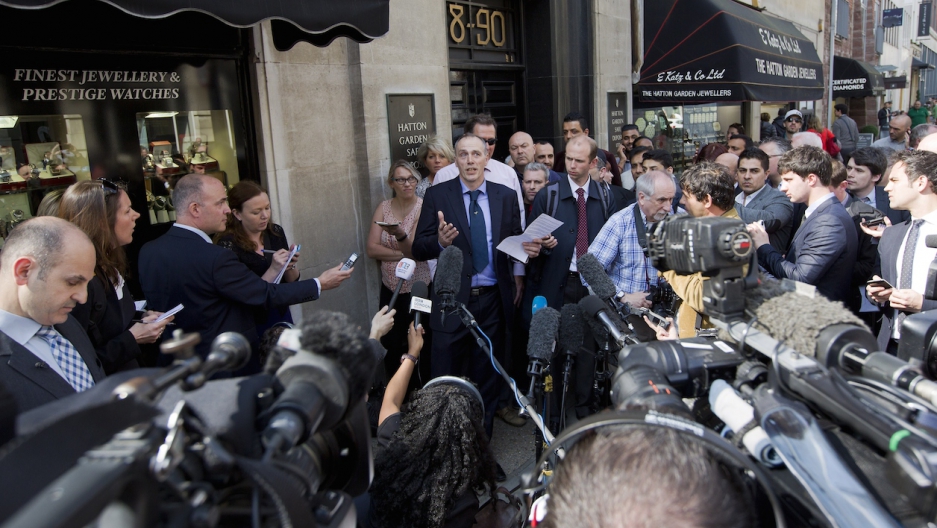 LONDON — It has all the makings of a Hollywood heist: bungling cops, audacious crooks, theories of an inside job and a fortune’s worth of jewels — and now, it seems, a dramatic arrest.

More than 200 London police officers swooped in on homes in and around the capital late Tuesday night and arrested seven men, ages 48 to 76, suspected in a multimillion pound jewel robbery. Officers also found bags of "high value property" believed to be items stolen during the job.

In April, jewelers returned from the long Easter holiday weekend to discover the basement vaults ransacked in Hatton Garden Safety Deposit Ltd, in the heart of London's diamond district.

The UK tabloid the Mirror ran the first CCTV images of the crime, dubbing the six visible perpetrators with noir-ish, headline-ready nicknames based on their distinguishing characteristics: Mr. Ginger. Mr. Strong. Mr. Montana. The Tall Man. The Old Man. The Gent. (The Gent was wearing nice shoes.)

There is confusion over who had the footage first. The Mirror claimed it obtained the video itself and passed it to detectives. London's Metropolitan Police say they've had the footage all along, but the force didn't release any images (or confirm they had the footage) until after the Mirror ran them.

Getting scooped in their own investigation would be another embarrassment for a force that could face millions of pounds in lawsuits for their handling of the crime so far.

Among the gem traders and jewelers of Hatton Garden, a center of the diamond trade since the 16th century, a code of omerta has fallen.

Some of the 72 burgled safe deposit boxes held the stock of small local traders who couldn’t afford their own vaults. There are rumors of powerful crime families among the victims, of suspicious fires and unanswered alarms. No one is talking to outsiders behind the glass-fronted windows that showcase Rolexes and glittering diamond solitaires.

Hatton Garden, the scene last week of one of the biggest heists in UK history. Thieves spent a weekend ransacking security deposit boxes in the heart of London's diamond district. #globalpost

London is following the Hatton Garden heist like a real-life crime drama. Newspapers are full of ex-cops and ex-cons turned consultants offering their two bits of insight into the burglary, in which no one appears to have been physically harmed.

News satellite vans line the central London street where the burglary took place. On Monday, seemingly every trader in the Heart of Hatton Garden Jewelry Emporium — an indoor market of stalls where several vendors were victims, according to other jewelers on the street — had a journalist from one of Britain’s major networks at his counter, trying to get an interview.

Maybe it’s the scale of the heist: The thieves may have made off with as much as $292 million in jewels, though the fact that many of the boxes’ contents were uninsured means the true value will likely never be known.

Maybe it’s the criminals’ audacity: They drilled through the concrete floor with industrial equipment before carting their loot away in wheeled trash cans, leaving tools, rubble and ravaged boxes in their wake.

But in an era of terrorist atrocities and faceless cyber crime, there’s something exciting about a good old-fashioned diamond heist.

It’s “inconceivable” that the criminals did not have inside information on the building, Barry Phillips, a former operational chief of the London police robbery unit, told the Telegraph.

“They must have had inside information to be able to get into a premises like that, to know the routes, the vulnerabilities, the lift shaft, and to defeat a state-of-the-art security system,” he added.

Detectives are looking for the burgled business’s two directors, who live in Khartoum, Sudan, and northwest London. Neither man has been charged or accused of wrongdoing.

Except, that is, by London’s amateur detectives, whose number is suddenly legion. None of them were willing to give their names, though. Like many PIs, they prefer to work anonymously.

“The thing is, right, why didn’t the police come?” said a man in a hoodie and Royal Mail work shirt on a break on Greville Street, adjacent to Hatton Garden.

“Every one of these is always an inside job,” a colleague said authoritatively. “As the owners haven’t rushed back, it makes you think. If you have a business broken into, you’d get on a plane, wouldn’t you?”

“Yeah, but people who got loads of money, they don’t worry about it, don’t they?” the hoodied man answered.