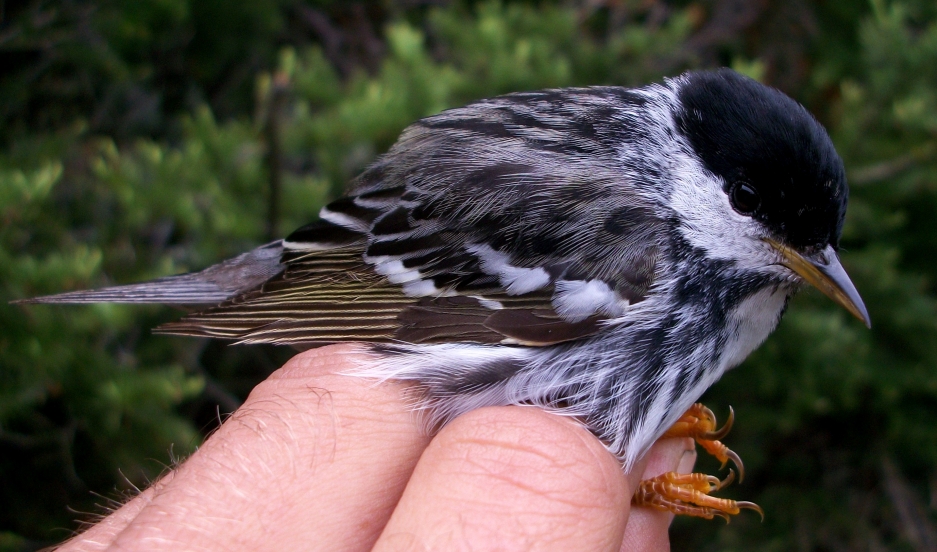 Blackpoll warblers almost double their body weight before takeoff for long flights, from 12 grams up to nearly 20 grams.

Think of the longest flights in the world and you might picture a trip to Australia or a super-long-range bombing mission. You probably won't think of a tiny songbird called the Blackpoll warbler — but you should.

Scientists strapped miniature geolocator backpacks to some of these unexpected "supermen" of the bird world to track their flights, and the results were stunning.

“The birds that we looked at took off from the coast, somewhere between Long Island and Nova Scotia, and flew straight down until they hit land, either in Puerto Rico or Hispaniola [the island made up of Haiti and the Dominican Republic,]” explains Bill DeLuca, an ecologist at the University of Massachusetts Amherst. The flight was approximately 1,700 miles and lasted up to three days straight.

That distance is remarkable for any species, but what makes this flight particularly incredible is that the Blackpoll warbler is a land bird. “Most forest-dwelling migratory birds really don’t like to fly over the water. They typically avoid the water at all costs — except for this one,” DeLuca says.

So how does the little guy pull it off? For one, he’s not so little at the time of flight. “One of the strategies that allows them to do this is they become very fat,” DeLuca explains. The birds almost double their body weight before takeoff, from 12 grams up to nearly 20 grams, turning themselves into what DeLuca calles “flying meatballs.”

Their extra fat is used as fuel and their brains provide the orientation. “They actually absorb some of their internal organs that they don’t need during migration, like their digestive system,” DeLuca says. When the warblers get to their final destinations, hormones kick in to generate the regrowth of their organs.

A strong tailwind also helps the birds, as they rely on southerly winds on their way down. Those winds aren’t available on the way back north, so DeLuca says the warblers take the route that other migratory songbirds fly, following the eastern seaboard.

But it’s not all eating and coasting being a Blackpoll warbler. DeLuca says the annual survival rate for the species over the course of a year is only 50 percent, and that long trip probably has something to do with it: “Most of that mortality, we think, based on some other studies, occurs during migration.”