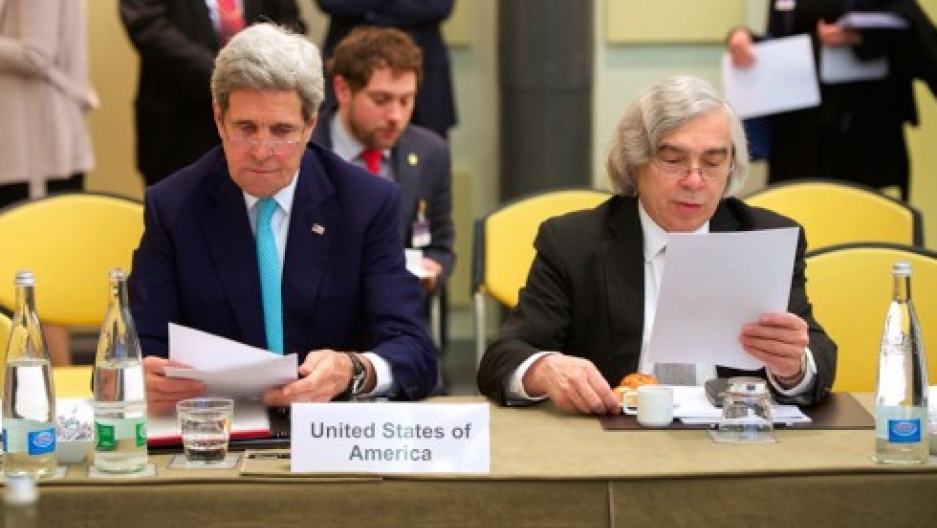 US Secretary of State John Kerry and US Energy Secretary Dr. Ernest Moniz sit side-by-side on April 2, 2015, in Lausanne, Switzerland, before the P5+1 member nations held a meeting to discuss ongoing nuclear negotiations with Iran.

Forget smoke-filled rooms with cigars and whiskey: The recent agreement between Iran and the West shows how complex international deals are now the province of scientists and programmers.

The "framework agreement" reached last week on Iran's nuclear program calls for Iran to reduce the number of uranium centrifuges it operates from about 19,000 to about 6,000. The country would also be required to reduce its stockpile of enriched uranium by 97 percent, from 10,000 kilograms to 300 kilograms.

Those numbers weren’t picked out a hat. They were based on models of Iran’s nuclear program and its centrifuges, developed by the US Department of Energy, according to one of the lead negotiators of the agreement.

American negotiators had to fashion an agreement that would push the time it would take Iran to develop a nuclear weapon to at least a year, called the "breakout period." That guided all the technical demands laid out in the deal, as well as the calculations required to meet them.

“The input is the number of centrifuges and their capability, the arrangement of the centrifuges, the amount of uranium they have, and the enrichment that they start with,” explains US Energy Secretary Ernest Moniz, who was Secretary of State John Kerry's number-two man at the talks. “All of those go into a calculation, and this set of numbers — 300 kg, 3.7 percent, 5,000 centrifuges actually operating — comes out to this one year breakout period.”

Moniz, a former professor of physics at MIT, has become of the administration’s key pitchman for the deal and achieved a kind of wonky celebrity status. He's tasked with convincing Congress — and the public at large — that the technical details of the deal will achieve the desired result.

"The so-called breakout time for Iran, if they chose to develop the material for a nuclear bomb, will go up immediately from two to three months to at least a year for at least 10 years,” Moniz says.

Beyond the technical requirements for Iran’s centrifuges and uranium enrichment level, the deal also hinges on the access that Iran will give to inspectors with the International Atomic Energy Agency, as the well the tools the agency can deploy in terms of cameras, sensors and communication devices.

“We feel extremely confident that if there is any violation of the agreement, we'll know it fast,” Moniz says.

One of most contentious parts of Iran’s nuclear program, the underground enrichment center near the holy of Qom, would be converted into a research facility for international collaboration under the agreement. Moniz hopes that center, if created, will become one piece of a much larger process of improving relations between the US and Iran.

“I think it will be slow going," he admits. "Clearly there are lots of issues between the United States and Iran that go back 35 years and will take a while to work out, but I think international collaboration going forward is in any event a good thing. And I hope, of course, that we will be able to reestablish relations in a way that our own collaborations are possible."