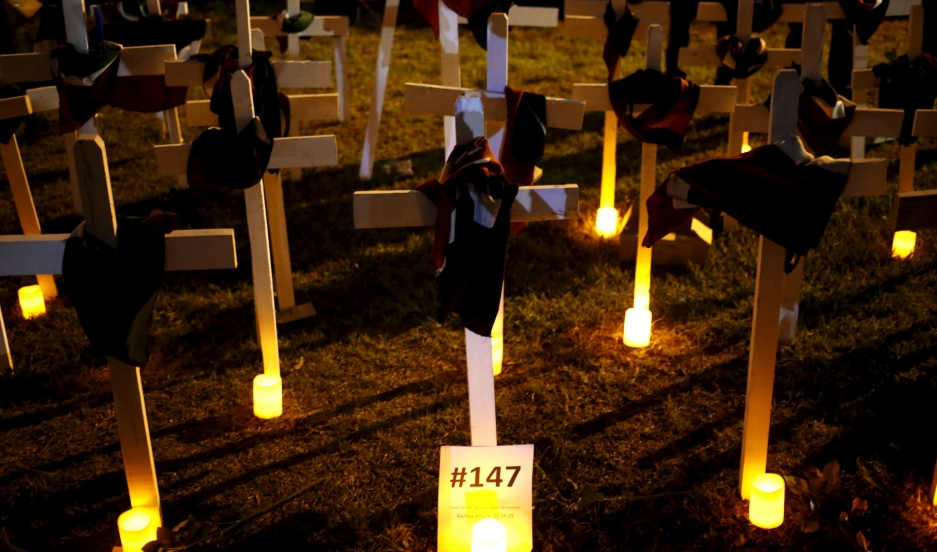 Wooden crosses are placed on the ground, symbolising the 147 people killed during an attack by gunmen at the Garissa University College.

The families of the students killed by Islamist terrorists in last week's attack on Garissa University College didn't just lose their children. They lost their best hope for the future.

"There was one young man, a 22-year-old named Gideon Kirui, and his whole village had raised the money for him to go to university," says Emily Johnson, a Nairobi-based reporter.

Frances Ochode lost his son, James. James was Ochode's first-born son, Johnson says. He had hopes James would do better than him.

James and Gideon were among the people, mostly students, who were gunned down last week by members of the Somali extremist group, Al-Shabaab.

Today, hundreds marched in Nairobi to remember the victims. Johnson, who attended a separate vigil, says there were "hundreds of people planting crosses in the ground, putting up photos of the students, writing messages of hope and peace, lighting candles."

"They also read the names of the students out loud," she adds.

Others turned to social media to share their grief, using the hashtag #147notjustanumber to share stories and pay tribute to each of the people who were killed. The death toll, which was initially reported at 147, has since risen to 148.

Johnson said few, if any, survivors of the attack attended the memorial. Many of the students come from other parts of Kenya, she says, and just wanted to go home and "spend time with their families."