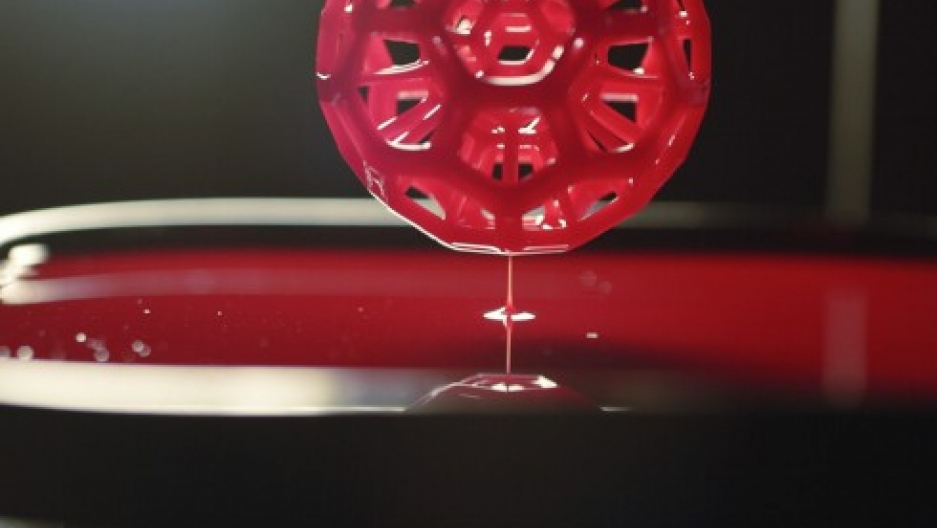 A still image from a demonstration of Carbon3D's Continuous Liquid Interface Production technology.

Sometimes life really can imitate art. And when the art in question is “Terminator 2" and the person doing the imitating is a chemist and material scientist, then things can get really interesting.

You've probably seen that iconic clip of the T-1000, "Terminator 2"'s shape-shifting villain, reduced to a puddle of metallic goo — which then moves and congeals together congeals together until the robot assassin is reformed, standing and ready for action.

It was that scene that inspired Joseph DeSimone and his partners at Carbon3D to develop CLIP, or Continuous Liquid Interface Production, a kind of liquid 3D printer. DeSimone and his team say their technology can print at 25 to 100 times the rate of normal 3D printers, and could bridge the gap between 3D printing and mass manufacturing.

“I can’t wait to see what designers and engineers around the world are going to be able to do with this great tool," DeSimone told the audience of a TED Talk in March.

The technology harnesses three key elements: light, air and polymers, such as plastics. Certain plastics can be turned from liquid to solid when UV light is shined on them and there's minimal oxygen present to inhibit the reaction. So DeSimone’s team runs a liquid polymer, or plastic resin, through a chamber with a UV light below it. By controlling where light is shown and where oxygen is present, they can dictate which parts of the liquid resin turn into solids.

"In this way, a part is created from a liquid into a solid, similar to the T-1000 in Terminator," explains Ashley Johnson, graduate research assistant at the DeSimone Research Group.

And while regular 3D printing works in a way that's similar to a regular inkjet printer — one layer is put on top of another until the object is formed — the CLIP process forms one full piece, and relatively quickly. At the aforementioned TED Talk, DeSimone began the presentation by having a CLIP printer begin work on a geometrically complex plastic ball. Just over seven minutes later, the completed ball emerges from the red plastic resin, and the audience bursts into applause.

Here is a shorter, sped up video of the same process, this time with the CLIP printing a model Eiffel Tower:

The speed at which the process works could make it revolutionary. “Because it's so much faster, you can actually use this device for mass manufacturing of different parts,” Johnson says.

For now, 3-D printing is largely used to create prototypes; the technology has been slower to move into actual large-scale industrial uses. But it may be only a matter of time and money before there's a prototype T-1000 in the works.