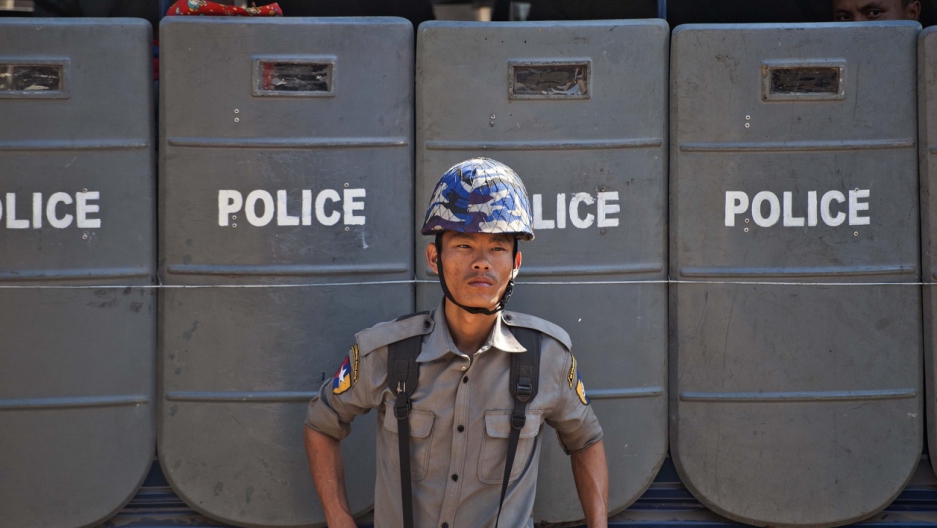 Myanmar riot police take position as they block a march by students and Buddhist monks on March 4, 2015.
Share

YANGON, Myanmar — There are plenty of reasons why cities and towns in America shouldn't be using military-grade weapons or armored vehicles to scatter protests.

But here’s one that might not have occurred to you. Over-the-top police aggression — as witnessed in Ferguson, Missouri last summer — is a gift to authoritarian nations looking to justify crackdowns of their own.

One of them is Myanmar. The country formerly known as Burma was for decades notorious for its violent control over dissent. It has been the recipient of countless lectures from White House officials and others over the years for subjugating its citizens under military rule.

The country is now undergoing a messy transition from despotism to a freer society. But that metamorphosis is far from complete.

This was underscored when police assaulted unarmed student protesters — who rallied to fix a desperately broke education system — in March. The peaceful protests took place in the small town of Letpadan which, like Ferguson, has rocketed from obscurity to a household name. It all ended when rampaging cops started cracking heads and making dubious arrests. A dozen activists remained in prison almost a month later.

The scenes made everyone who follows Myanmar nervous that the government had regressed. But there is no need to fear, according to Myanmar’s most visible official, Ye Htut, the minister of information. After all, he says, the United States sometimes uses brute force to break up protests too.

In a statement, Ye Htut cited the crackdowns on both Occupy Wall Street and Ferguson and noted that, unlike in Myanmar, “nobody spoke of US democracy having backtracked.”

GlobalPost caught up with Ye Htut in Yangon, Myanmar, and asked him to elaborate.

“Even in the US,” he said, “individual police will react under pressure differently. There’s reasonable force and excessive force. That’s the problem we were facing ... the actions of some individuals didn’t meet the code of conduct, our rules for handling demonstrations.”

For decades, the US government slammed Myanmar’s treatment of anti-government protesters, some of whom are lionized and even funded by American agencies. In March, during a speech in Selma, Alabama, US President Barack Obama exalted the many dissidents in Myanmar who “went to prison rather than submit to military rule.”

Officials in Myanmar, who are near-giddy at the prospect of receiving American aid and investment, refrained from responding. And, anyway, they haven't really earned the moral high ground to do so. The country remains a place where laws are weak and opposing the government is dangerous. But it’s hard not to detect the schadenfreude some officials in Myanmar felt after the Ferguson debacle.