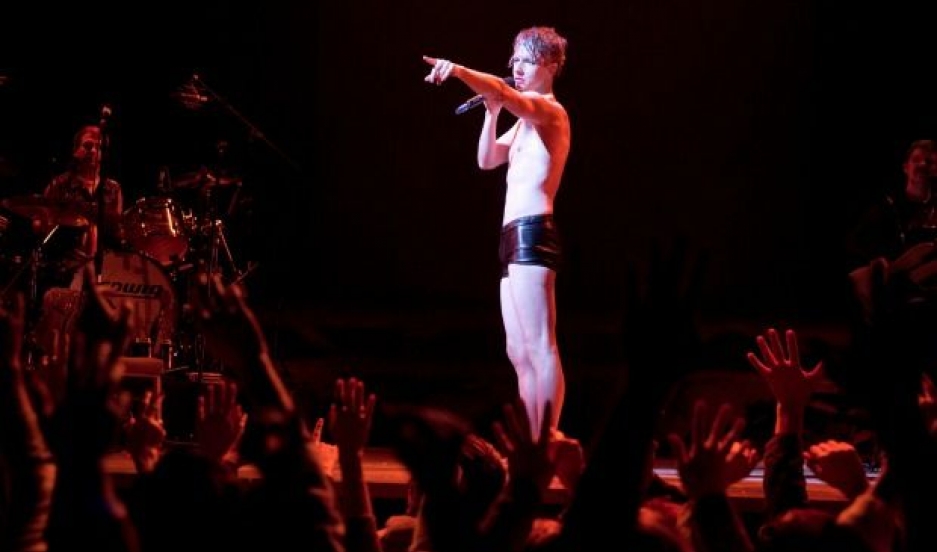 John Cameron Mitchell as the title character in the Broadway run of "Hedwig and the Angry Inch."

When John Cameron Mitchell’s mother first saw his transgender punk operetta, "Hedwig and the Angry Inch," she thought it was a bit vulgar. Now, 20 years later, he’s back in heels playing the lead in a Broadway revival — and his mom couldn’t be prouder.

Broadway “kind of erases all the moral objections,” Mitchell says.

"Hedwig" follows a disillusioned punk rocker transplanted from East Berlin to America after a botched sex-change operation. Mitchell wrote and starred in the play in the 1990s, when it became an off-Broadway cult hit. When he directed a movie version and reprised his role as Hedwig, it won him an international following.

The show, with Mitchell as lead through April 26, is now enjoying a resurgence in popularity; the current Broadway run has garnered Tony Award wins and featured "How I Met Your Mother" star Neil Patrick Harris as Hedwig.

The connection to Berlin isn't coincidental: Mitchell’s father was a major general in the US Army, stationed in Berlin from 1984 to 1988.

“I was in college, so I’d come and visit Berlin and go to the festival and meet underground punk drag stars while also hanging out with Dad and Prince Louis Ferdinand, last of the Hohenzollerns,” Mitchell says. He also recalls visiting Checkpoint Charlie and seeing the photos of a young man who was shot in no man’s land, neither side coming to his aid.

“That I think, in a way, was emotionally the spawn of Hedwig’s [situation,] trapped in the middle," he says. "You know, neither here nor there, on the fence.”

Mitchell’s parents were “a little terrified” of the musical because of its extreme sexual content. Yet Michell's father, “in his kind of quiet way, let me know that he really approved.”

Others were less convinced. Many colleagues told him he was “committing career suicide” by playing drag and doing punk. “Those were low-class things in the theatre and the acting world,” he says, signaling just how far Broadway has come in the past 20 years with respect to sexual orientation and gender.

He's also having more fun on Broadway's bigger stage. In the 1990s, with the film and his future still ahead, Mitchell had more on the line as he played Hedwig. Now there’s less pressure — both on stage and in society.

“Things like sexuality, they’re not easy issues. But they’re actually, to me, very black and white,” he says. “We just are who we are.”