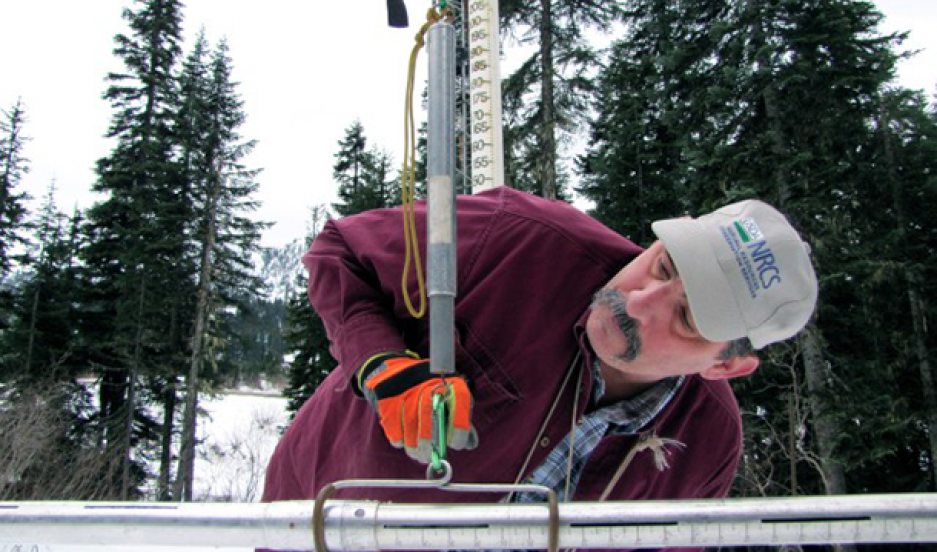 But record-low snowpacks aren’t just a thing in California. They’re also happening further north. In western Washington, snow levels are more than 90 percent below normal, and statewide the snow level is at 71 percent below where it should be. The situation is even more severe in Oregon, which has received less than a quarter of its normal snowfall.

It was bad news for skiers, and now officials are worried about how the lack of snow could affect water levels into the spring and summer. Worse: This could be a sign of things to come.

“When people ask me about this year and whether this is global warming I say, well, global warming looks like this and I also say we’ll see a lot more of these, more frequently, as we go forward,” says Amy Snover, the director of the Climate Impacts Group at the University of Washington

But unlike their California counterparts, Pacific Northwest water manages aren’t ready to press the panic button just yet. That’s because while snow levels are low, total precipitation is, for now at least, at or above normal for most of the area, and water managers can change the way they manage their systems to catch water further downstream.

Also, water managers in region don’t just look at their own backyard when trying to gauge how much water to expect from snow melt.

“That doesn’t give you the total picture,” explains Mike Hanson, a spokesperson for Bonneville Power Administration, which manages 31 federal dams on the Columbia and Snake Rivers, and provides about a third of the electricity for the Northwest. “What’s really important to us is what is happening at the higher elevations throughout the northern Rockies going into Canada.”

Among the things that Canada can be counted on for are exceedingly nice people, and snow. Hanson expects Canadian snow melt to flow into the Pacific Northwest via the Columbia and Snake rivers over the next few months.

Snover sees this year’s low winter snow back—and terrible ski season—as kind of “dress rehearsal for climate change in the Pacific Northwest” as water managers find new ways to cope and anticipate what will likely be a continuing trend.

“The climate models show us that a winter like this in the Pacific Northwest could become the new normal within a handful of decades, instead of the rare tough year that we live through as best we can and hope doesn’t happen again anytime soon,” she says.

A practice round or two isn’t necessarily a bad thing, either.

“The silver lining about this year is that it provides an opportunity to test our ability to cope with exactly the change we know is coming,” Snover says. “Will we watch and learn, and where we fall short, develop better approaches so when the lights go down and the curtain goes up, we’re ready for the real thing?”

This story originally aired on PRI's Living on Earth with Steve Curwood. An earlier version was produced by EarthFix, a public media partnership in the Pacific Northwest focused on environmental news.