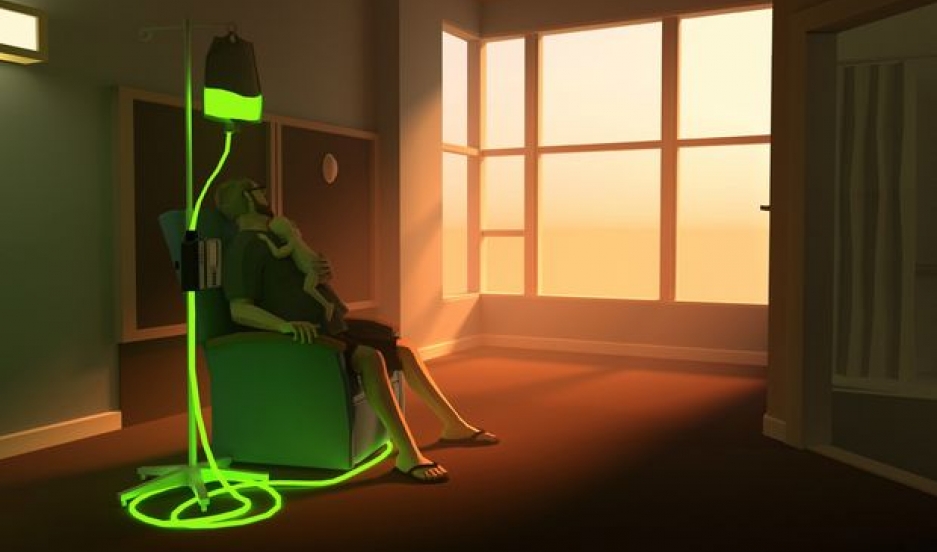 A still from "That Dragon, Cancer."

Ryan Green's young son, Joel, was suffering, stricken with cancer — and there was nothing Ryan could do to help him.

It was his son’s first overnight stay in the hospital. Joel had been diagnosed with Atypical Teratoid Rhabdoid Tumor. He would eventually undergo surgery, radiation therapy and chemotherapy, but that night he was simply struggling to keep down sips of water. Every time he tried to drink, he threw up.

Amy was already documenting their struggle with cancer on a website the family set up. But Joel, a data programer with an interest in video games, was struck by a different idea after that night: He told his wife he wanted to create a game about Joel’s struggle with dehydration.
She was not convinced.

“That’s the worst idea I’ve ever heard,” Amy recalls telling him. “That is not a game. No one will play that game.”

But Ryan persisted. He persuaded his friend, Josh Larson, to help. They created a prototype and bought it to the 2013 Game Developers Conference in San Francisco. The only had a short demo available, but it game drew the attention of journalists and critics. Forbes called it the best indie game of the conference, “more of an emotional experience than a videogame, but what a sad, beautiful experience.”

The demo, titled "That Dragon, Cancer," focused on Ryan in his son’s hospital room. You see the world from his perspective as he tries to put his son to sleep or soothe his crying. You hear monologues in which Ryan, or the character playing him in the game, laments small, niggling things like the design of the armchair by Joel’s bed.

“This chair is too small. It sticks to my skin. I hate vinyl,” he says. He also contemplates his own role, and how, at least at the beginning, he saw it as a kind of adventure in which he was cast as the “compassionate and caring father” protecting his son from danger.

One fact made this all especially poignant: Joel was still alive. He had overcome tumor after tumor and was now 4 years old. The virtual reality of the game was one that Ryan, Amy and Joel were still living.

“Every few months there would be something new,” Ryan recalls. “He wouldn’t be able to walk, and then they’d do the radiation. And it would work and then he’d be able to walk again.”

While there were moments to celebrate, there were also plenty of bleak times that were reflected in the video game. At one point Ryan’s character can’t get Joel to stop crying. When all options are exhausted, there’s only one thing left for the player to do: “Press X to pray.”

“It’s not something I want to force you to do,” Ryan explains. “It’s not ‘Press X to bend knee.’ But it is ‘Press X to pray,’ because in this scene I’m there and you’re experiencing my thoughts — and it really happened. That night that’s all I had left to do. And that’s when peace came to the room. That’s when Joel fell asleep and found comfort.”

The game shifted. Ryan Cousins, one of the developers, says the mission of the player became not defeating cancer, as was the original intent, but instead loving and comforting Joel as much as possible before time runs out. This was even reflected in the color scheme: The designers used hues of orange and pink to make every scene feel like a fleeting sunset.

Ryan and his team raised more than $100,000 via a Kickstarter campaign, and they plan to release it this fall. But Ryan is still in mourning.