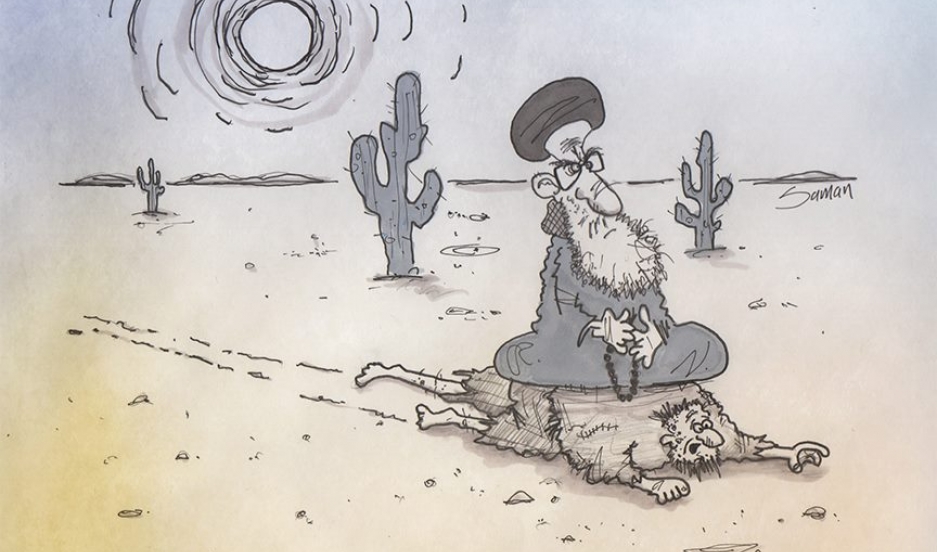 A cartoon drawn by Iranian American satirist Saman Arbabi about the nuclear aspirations of Iranian leaders.

If you're an Iranian American satirist, the news out of your home country provides endless fodder.  So on a day when Iranians inside and outside Iran are celebrating the nuclear deal betwen Tehran and Washington, here's Saman Arbabi's hopeful observation: "Iran may be one step closer to lifting the ban on pornography."

Arbabi is used to tweeting and commenting about dark news out of Iran, so he's especially delighted to see his compatriots back home so happy. "It's like the Iranians won World War II!" he says. "People are celebrating and they're pretty happy. So any excuse for them to get out and wave some flags and turn up the music and dance and not get arrested is a good cause."

I had lost all hope after 2009, but makes me proud to see people recharged and behaving civilized. Wish I could be in #Iran celebrating.

But he still has his concerns: "What I'm worried about is now the Iranians are going to realize all this crap they're about to get after the sanctions are lifted are actually made in China, too."

Arbabi left Iran as a child thirty years ago, but it never left him. "I'm both the 'axis of evil' and 'the Great Satan' and I want the best for both people," he says. But he thinks the nuclear deal puts the United States in a particularly tough position: "It's like an Islamic marriage. The US has three wives and none of them get along. One of them is Israel, one is Saudi Arabia, and the other is now Iran, the new wife."

Arbabi says humor has always been a good outlet for him, as entertainment but also as therapy. "You get tired reading about the same old beheading over and over again unless someone starts making fun of it, in whatever dark way you can." Now he has some good news to mock, too.