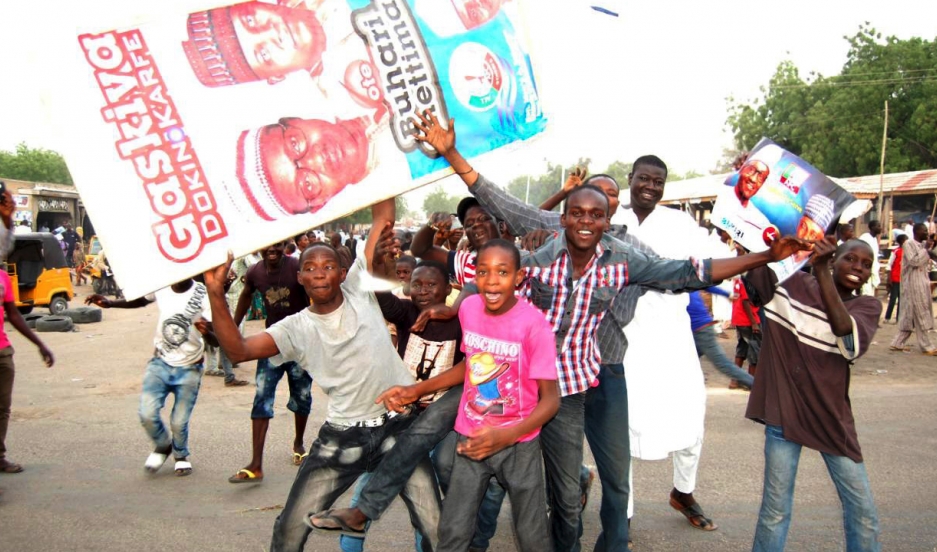 Supporters of presidential candidate Muhammadu Buhari and his All Progressive Congress party celebrate in Maiduguri. Buhari congratulated outgoing President Goodluck Jonathan for peacefully relinquishing power on Wednesday, a day after becoming the first politician in Nigeria's history to unseat a sitting leader at the ballot box.

In becoming the first Nigerian to defeat a sitting president through the ballot box yesterday, Muhammadu Buhari's victory turned into a political flashpoint for African hopefuls determined to set the same precedent in their country.

In Kenya, five democratic elections have yet to see an opposition candidate successfully unseat a sitting president. But Raila Odinga, who lost in 2007 and 2013, said the outcome of Nigeria’s election gives him hope. Buhari, who is 72 years old, lost elections three times before his successful campaign. Odinga will be the same age when Kenya holds its sixth presidential elections in 2017. Yesterday, he was quick to congratulate Buhari and note the importance of his victory to democracy across the continent:

Jointly, with President-Elect Mr. Buhari, they have made a tremendous contribution to the democratisation journey in Africa.

I take this opportunity to congratulate Gen Buhari and the Nigerian people; this day dispels the numerous myths about elections in Africa.

In Tanzania, a young presidential hopeful, January Makamba, hopes to unseat his country's ruling party candidate in October. The incumbent president, Jakaya Kikwete, is ineligible to run for a third term. In the lead up to a hotly contested race, and in a climate of escalating sectarian tensions between Christian and Muslim communities in Tanzania, Makamba commended the importance of a ruling party concession.

Calling to concede is a rarity in Africa. We may have opinions on his record. But Jonathan, with grace, chose to save his country from chaos

How did voters end up turning out Nigeria's leader? Simple, says Nigerian writer and art historian Teju Cole. "The incumbent was a failure. Goodluck Jonathan had really failed to satisfy the people's needs, to deal with corruption, to deal with terrorism, to actually provide any kind of inspiring leadership for the country,'' Cole says. Nigerians "really wanted to be part of the modern world where such things can happen in an orderly way.''

Incompetence and corruption exist well beyond Nigeria's borders, but will others get a chance to throw their leaders out? 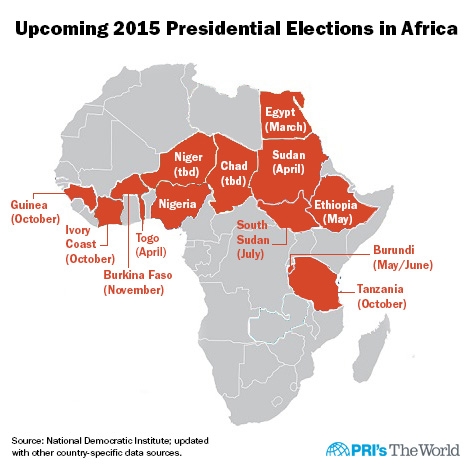 The outlook for an opposition victory over a sitting leader is unlikely, however.

In Togo and Burundi opposition groups unsuccessfully protested the decision of incumbents to run for a third term; the sitting president is expected to win easily in both countries. A similar outcome appears to be taking shape this month in Sudan.

Despite protests and calls to postpone the election by opposition parties, Sudanese citizens are scheduled to head to the polls on April 13. The current president, Omar al-Bashir has held the position since 1993 and has been indicted by international courts for mass killings in Darfur. Nonetheless, he is one of the only recognizable names on the ballot and is expected to win another term.