Multimedia journalist Sonia Narang recently returned from reporting on reproductive rights in the Philippines for Across Women's Lives. We sat down to talk about her experience.

Anne Bailey: Was this your first time in the Philippines?

Sonia Narang: Yes. I've reported in other parts of Asia before, including Japan, India, Nepal, Pakistan and China, but never in the Philippines. Interestingly, all my neighbors were Filipino and Filipino American on the street where I grew up in southern California, but I never thought then that I would go to the Philippines myself.

Mothers sit on benches at the maternity ward at Fabella Hospital in Manila to breastfeed and calm their newborns.

AB: What drew you to cover issues of reproductive rights in the Philippines?

SN: I was very interested in covering the role religion plays when it comes to women's bodies. When I was researching story ideas, I happened to be at the Partners' Forum for the Partnership on Maternal, Newborn and Child Health in Johannesburg. There I met a UNICEF official, who was formerly based in the Philippines. She told me about all the births happening everyday at Fabella Hospital. I had also read about a documentary in the works by filmmaker Ramona Diaz, who had filmed extensively at Fabella Hospital. Her images from inside the hospital were so powerful, and I wanted to see for myself what was going on there.

I also began to find out more about the wide reach of the Catholic Church across the Philippines, and how the Church has been able to influence such major legislation as the Reproductive Health Bill, effectively stalling the bill's passage until 2014. I knew I wanted to cover this story, especially at this critical time when the new law is rolling out across the Philippines. The law is designed to make contraception widely accessible for free at public health clinics nationwide.

Fathers line up outside the maternity ward during visiting hours. Hospital rules don't allow men inside the ward, so new moms meet with them in the hallway.

AB: In Manila, you visited one of the most crowded maternity wards in the world. What was that experience like for you?

SN: The minute I walked inside, I was completely overwhelmed. I'd seen photos before, but this was something else. The cacophony inside the ward was also quite a surprise. The nurses were constantly yelling out patients’ numbers on a microphone during visiting hours. This made the whole place sound like a blaring supermarket deli counter or auction house.

When I walked in for the first time I didn't know where to start, so I just moved around the ward and observed for a bit. I started filming, and then saw one woman who was smiling at me and the camera. I asked her for an interview and she agreed. She'd just delivered her third child, and she was much more relaxed than some of the first-timers.

I was so moved to see women helping one another in the beds and watching over other babies when their mothers stepped out into the hallway. I couldn't believe how cramped it was in this ward, but tragically many of these women live in similarly tight, crowded quarters in and around Manila. In fact, a major fire recently hit a section of Manila's largest slum, and many families were forced into evacuation centers or the streets until they could go back home.

Women listen intently at a workshop on birth control at a Likhaan clinic in Manila.

AB: As a foreigner who didn't speak the language, how did you gain the trust of the mothers at Fabella hospital? Or did you?

SN: The mothers at Fabella Hospital were very open to talking about their experience, even to a non-Filipino. The younger women were a bit shy about sharing their stories — especially the teenage moms — but the older ones who already had a few children didn't spare words.

Since I don't speak Tagalog, my translator helped me ask questions. Some of the mothers I interviewed could understand English, but couldn't speak it, so they answered in Tagalog. I wasn't sure if I'd be able to talk to women who had gone through an abortion, since it's illegal in the Philippines. However, the Fabella Hospital staff allowed me into the post-abortion care unit, and introduced me to Maribeth Endoso.

In the beginning, Maribeth didn't acknowledge that she felt any pain or difficulty, but later in the interview she began to reveal things slowly and really opened up to me. I think she saw the entire interview as cathartic, or even a confession of sorts. My translator and I were the first people to sit down with her in the hospital and actually listen to her in a place where everyone seems to be rushing about.

Lina Bacalando addresses folk myths about artificial birth control to a packed room of men and women at a Likhaan clinic.

AB: How does being a woman affect the way you approach women's issues like the ones you covered in the Philippines?

SN: I think men and women journalists approach these stories in similar ways. In my case, I felt so connected to the women I interviewed in the Philippines because earlier generations of women in my family from India also suffered during childbirth and pregnancy, had little or no power in their large extended families and gave birth to many children. As a woman, I sympathize with their situations, and perhaps that comes through in my stories. Although I've never come close to experiencing what these women have been through, I feel this bond with them.

Analesa Paluga with her husband and young son. Paluga says they've had two unintended pregnancies, since they didn't know about contraceptives until they heard about Likhaan.

AB: What's up next for you?

SN: I'm producing stories I reported in India, also for Across Women's Lives. After my reporting trip to the Philippines, I spent two months in India, where I talked extensively to women who are bringing change to their patriarchal communities in the north. Those stories will be coming soon. 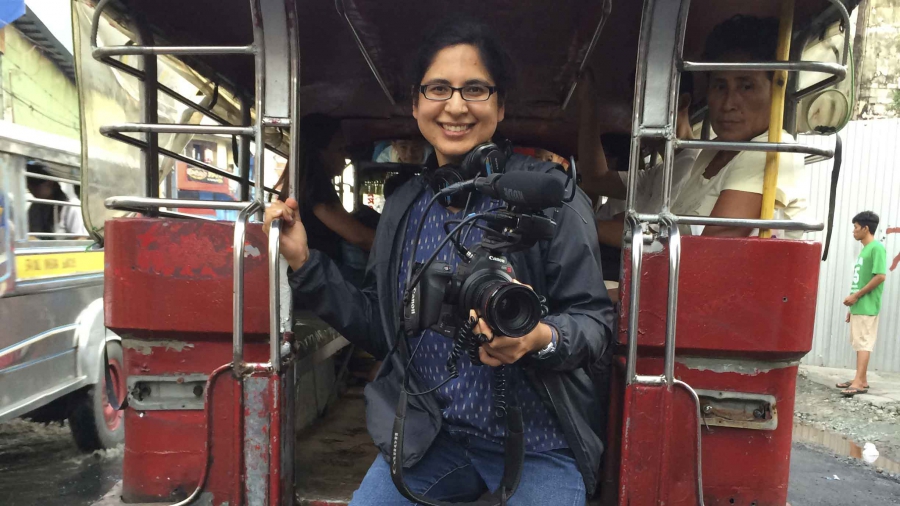 Multimedia journalist Sonia Narang on assignment in the Philippines

Support for Sonia Narang's reporting came in part from the International Reporting Project.