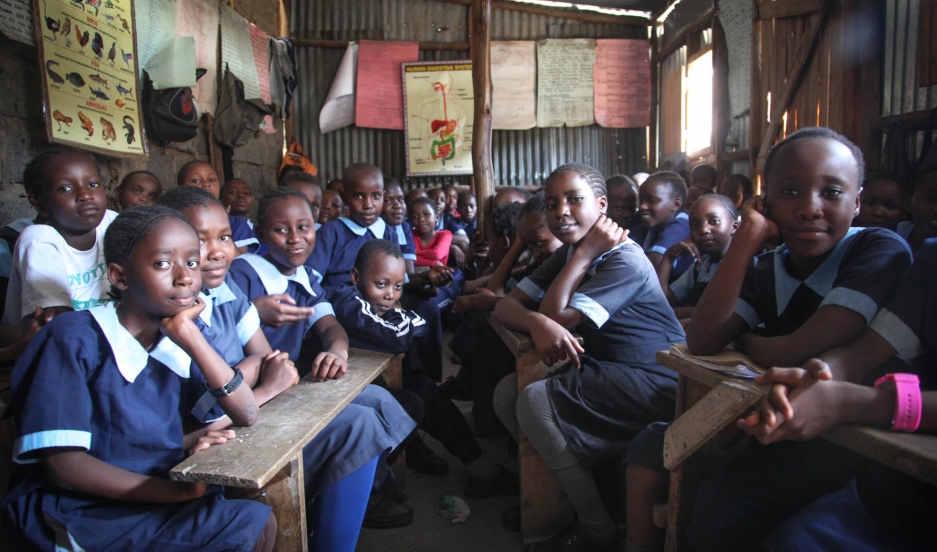 Female students at the Glory Learning Centre in Nairobi's Tassia slum talk about sex, boys, and their bodies in a forum meant to educate them about their rights and encourage them to finish their studies.
Credit:

I’m on a bumpy dirt road leading out of Tarime in rural, northern Tanzania. With me is local child rights activist Kambibi Kamugisha. As we leave the city behind, we notice small processions of people decked out with crowns and sashes. They're blowing whistles and dancing.

It’s December, and for the Kurya people who live around here, that means it’s time for both boys and girls to be circumcised. Celebrations follow the procedure. The girls who have been cut walk slowly, shaded beneath colorful parasols, their faces painted white.

I see people covered in leafy branches while others dance with machetes. It’s all very joyous — infectious, even. But for Kambibi, the celebrations are a reminder of what she’s up against. Tradition says these children are now officially ready for marriage.

About 15 percent of Tanzanian women have been subjected to FGM, according to the country’s 2010 demographic survey.
Explore the survey

“You might be 14, but they regard you as someone who can take responsibility for a family,” Kambibi says.

If female genital mutilation, or FGM as it’s known, is so inextricably linked to early marriage, then disrupting one practice could put a halt to the other. Which is why we’re headed to Masanga, a small village in the hills near Serengeti National Park. 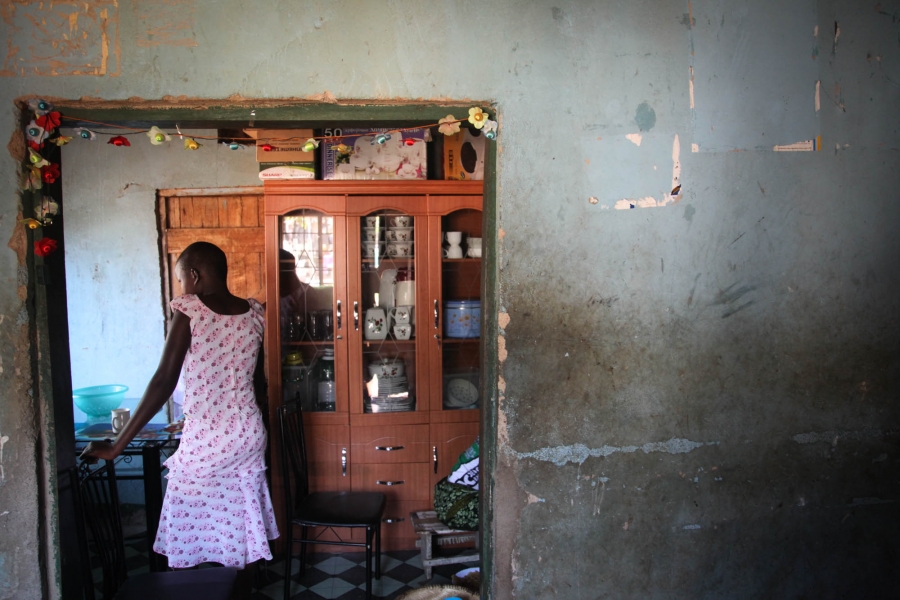 "Grace," a 15-year-old girl who ran away from her child marriage.

We pull into a yard where hundreds of young girls are running around, playing, or sprawled on the grass. The blue and white building looks like a typical school — and for most of the year, that’s what it is. But in December, when school is out, it becomes a safehouse.

A young nun walks onto the schoolyard and is swarmed by girls. This is Sister Germaine Bayibika, who runs Masanga Center. She greets the girls by name, returns their hugs and beckons me into a classroom. There are no desks, just stacks of mattresses.

“Some girls do not really have permission from the mother or the father, and they run away and they come here,” Sister Germaine says. “And this year because mutilation has been very rough, there are many, so many here.”

Want to do or know more?

If you want more information about the work of the Children's Dignity Forum, or even pursue volunteer or research opportunities on their upcoming projects, check them out online.
Get involved

Sister Germaine first opened the safe house in 2008. That year, 50 girls sheltered there. This year, there are more than 600. They’ll stay till the end of the month, when it should be safe for them to go home without being cut.

One of these girls we'll call Mary. She’s 12 and slim, with close-cropped hair. Her escape to Masanga, she says, was thanks to her socks.

“She made the plan herself, she made the plan of coming here,” Sister Germaine translates. “At school that day, she did not put on socks on purpose. And the teacher sent her back. She said to her, ‘You are not in full uniform, you do not have the school socks, so you go home.’ She took that opportunity to go to the rescue camp.”

When Mary’s mother realized she’d run away, she was furious. She told the girl over the phone that she would have to find new parents. So now Mary plans to work toward becoming a teacher. She and her new friends at Masanga call themselves “the modern girls.”

When I ask her if she wants to get married ever, Mary says no.

The safehouse employs round-the-clock security to prevent parents or clan members from snatching the girls back. But after December, there isn’t much Sister Germaine can do to protect them. There just isn’t funding to keep them all there indefinitely. So she does her best to build a bridge back home.

“On graduation day now we give certificates to the girls,” Sister Germaine says. “We called all the traditional leaders, we called the woman who mutilates girls, we called the representatives from the church, we called the parents, we called everybody. So many people came. We did it on purpose so the people who will come to that ceremony could hear and get the message and know that these people have chosen not to be mutilated.” 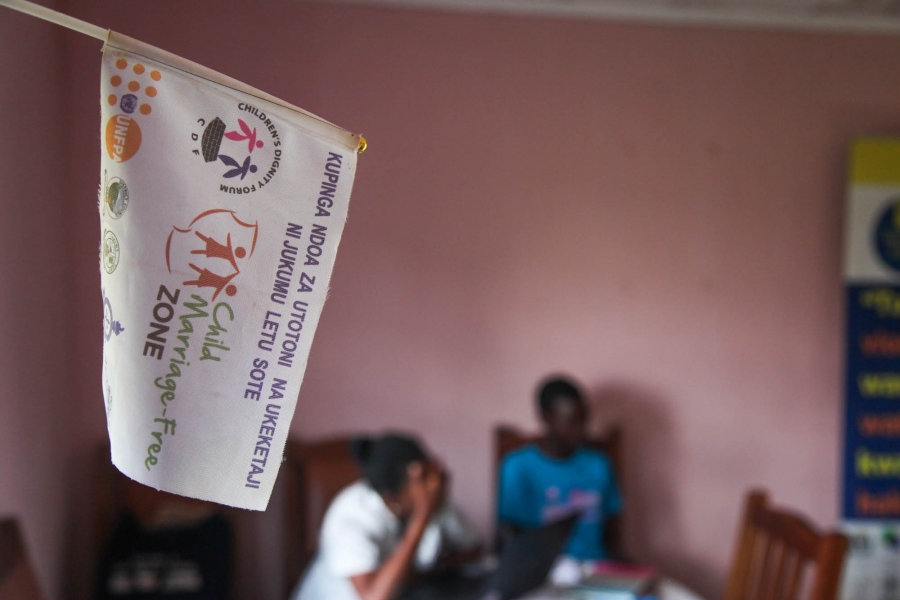 For those girls who aren't welcomed back home, or who never made it to a safe house, there's a resource. The Children’s Dignity Forum has an office just a couple of hours back down the road in Tarime. They serve many of the surrounding villages, including one just 15 minutes from town, where Kambibi Kamugisha introduces me to a 15-year-old girl I’ll call Grace.

Grace is wearing a pink dress she made herself. She’s been training to be a tailor since running away from her husband.

“Her grandmother forced her to get married and she refused.” Kambibi translates for Grace. “At that time, the grandmother had already received the dowry, the cows.”

Grace is from the Luo tribe, which practices polygamy, but not FGM. She became the second wife to a much older Kurya man who beat her badly. She ran away, moving from place to place before another young woman, a single mother, finally took her in.

Kambibi translates: “She says that man has tried a lot to get her back and he has tried to search for her wherever she goes.”

The thought of her husband turning up hangs over Grace. He paid five cows for her, after all. Dowries, which the husband pays to the family of his wife, are a major driving force behind early marriages here, especially for families struggling to make ends meet. Grace much prefers investing in herself.

“If I’m trained in tailoring I might be able to do my job and get my own means of surviving,” Grace says in Swahili.

Later, at the CDF office, I meet Sophia. She's 17, with a 1-year-old at home. Her husband left when she was pregnant. She doesn't blame her own mother for marrying her off at 16. But she does hope for better for her own child.

“I believe my daughter is in safe hands,” she says. Knowing there's another way — without FGM, and without early marriage. It's a lesson she intends to pass down.