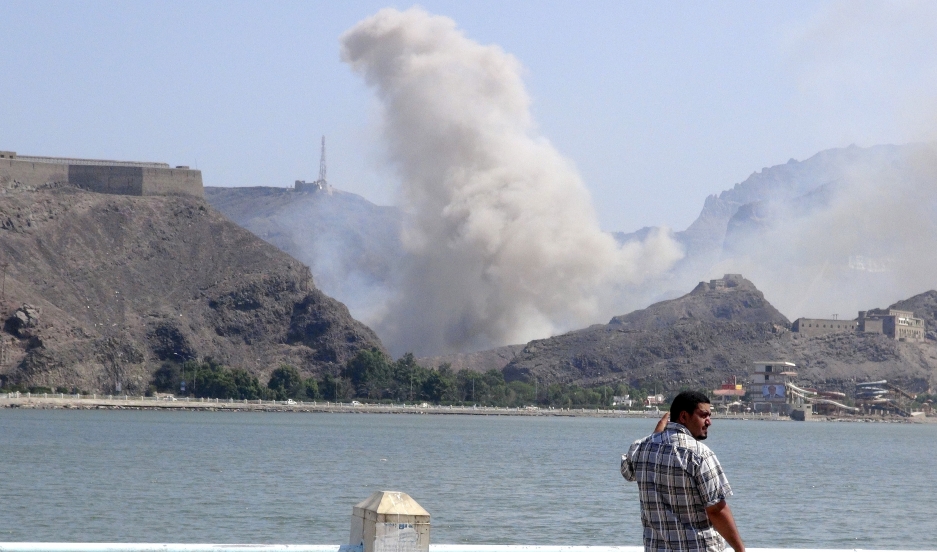 Smoke rises from an arms depot at the Jabal Hadeed military compound in Yemen's southern port city of Aden on March 28, 2015.

Twenty-year-old Summer Nasser is a born and bred New Yorker, but her strong family ties bring her to Yemen several times a year. On her latest trip, in February, she arrived just as the US was pulling out its diplomats and military personnel in face of rising violence in the country.

Nasser's ancestral home is on the brink of civil war. Yemen's powerful neighbor to the north, Saudi Arabia, is conducting airstrikes against a group called the Houthis, rebels who took over Yemen's capital last year and forced its president to flee the country earlier this month

"We're not feeling so great coming from the States to this kind of situation," Nasser says. "I never thought I would say this, but we really don't know if we [will] wake up the next morning. That's how intense the situation is in terms of security."

Yet while China has evacuated its nationals by sea and Pakistan and India are flying their citizens out, the United States has no plans to rescue Americans in Yemen — at least not for now. "We were actually really disappointed that, because [even] Somalia ... has evacuated their nationals," Nasser says.

She estimates that hundreds of Yemeni-Americans like herself are in Aden, the port city on the Red Sea where she is staying. She acknowledges she knew about the State Department's call for Americans to leave Yemen, which it announced in February just as she was arriving in the country. But Nasser says she chose to wait for the Yemeni school year to end so she could take her younger relatives back to safety in the United States.

A US State Department spokesperson reiterated the official US position in an email to PRI's The World. "There are no plans for a US government-sponsored evacuation of US citizens at this time," wrote media officer Niles Cole. "We encourage U.S. citizens to monitor the news and seek available departure options from Yemen, via air, land, or sea."

But that became less of an option last week, when the Saudis declared a no-fly zone over Yemen. "Now we're not allowed to fly out," Nasser says. "And we would think, because [the] US is supporting Saudi Arabia through logistics, that they would evacuate [US] citizens.  We're trying our best to voice our nervousness and disappointment through respectful means, calling upon the US State Department to actually act and to evacuate the nationals."