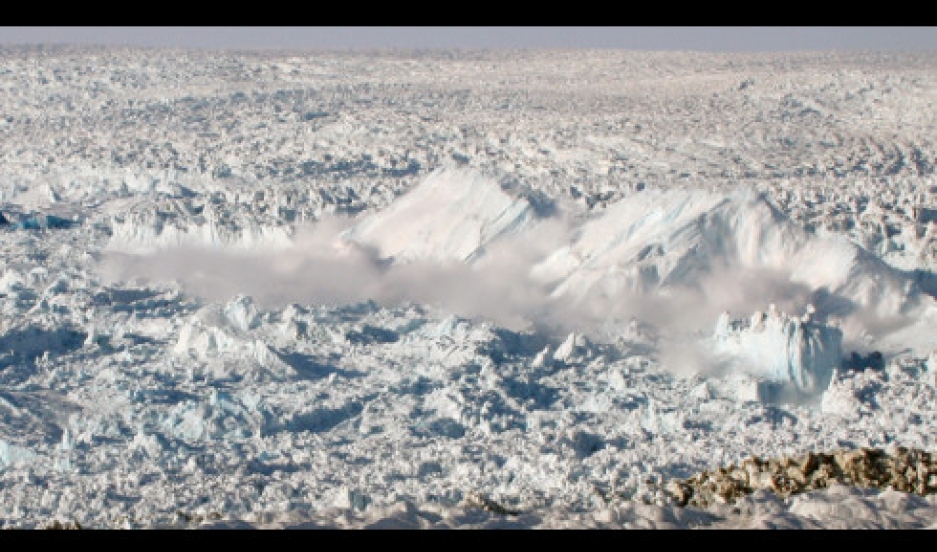 Glaciologist Jason Amundson photographed this iceberg capsizing near Greenland's Jakobshavn Glacier in 2008 (much of the berg is submerged). It represents a common scenario: More and more, icebergs are calving in slimmer pieces, which are more prone to flipping than tabular chunks.

Seven years ago in a fjord near Jakobshavn Glacier in Greenland, glaciologist Jason Amundson captured a photo of a 900-meter-high iceberg capsizing, ice crystals flaring up around it like stage smoke.

“It sounds sort of like thunder, or trains in the distance,” says Amundson, who’s also an assistant professor of geophysics at the University of Alaska Southeast.

His photo represents a scene that’s become common in Greenland. More and more icebergs are flipping over after they calve, or break away, from glaciers, Amundson says. The reason has to do with the dimensions of the bergs: They’re slimmer than they used to be. The narrower the berg, the less stable it is, and the more likely it is to overturn.

Icebergs used to break off in much larger, tabular chunks, but Amundson says “we don’t tend to see that kind of calving anymore. It tends to be this kind of sliver."

The reason can likely be attributed to changes in climate and ocean conditions that have resulted in the loss of floating ice shelves, which are essentially extensions of glaciers that protrude from land into the sea. Melting ice shelves are thinner and more inclined to break as they retreat toward the land, where the ice encounters a natural stress that makes it bend.

“This provides a natural fulcrum or ‘breaking point’ for the ice,” says Justin Burton, a physics professor at Emory University in Georgia who studies iceberg calving in Greenland.

Amundson adds that glacial ice flows faster as it retreats, resulting in more fractures in the ice. “So that could contribute to the [narrower] size and shape of the icebergs,” he says.

A better understanding of calving behavior could shed light on how ice cover and sea levels might change in the future. “People want to model the coverage of ice on our planet because it’s an important indicator of climate change,” says Burton. “But in order to model it, you have to know how much is coming in and going out.”