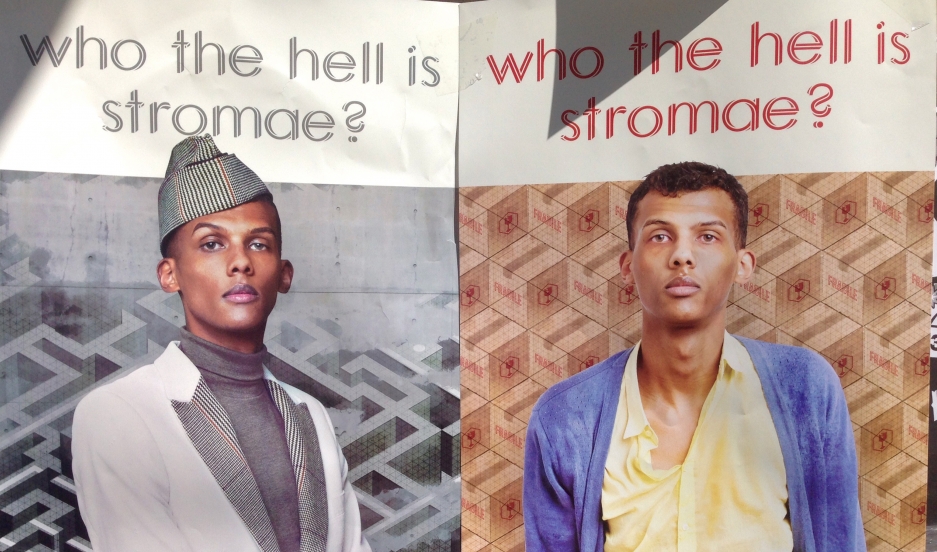 Stromae poster on a wall in Austin, Texas.
Credit:

So who the hell is Stromae?

If you'd been at the South By Southwest festival in Austin, Texas, last week, you’d be asking the same question. There were posters everywhere asking "Who The Hell is Stromae?"

Well, we found him — and we asked him: “My real name is Paul Van Haver and my stage name is Stromae," he says. "I'm 30 years old, and I'm a singer and composer."

What he didn't mention is that he's an Internet superstar. His music videos get hundreds of millions of views. He's collaborated with artists like Kanye West and Lorde. President Obama has one of his CDs, a gift from the Belgian prime minister.

That's all pretty good for a guy from Belgium who sings in French. His stage name is a riff in French pig-Latin for the word Maestro.

“I was born and raised in Brussels and my mother was at home alone," he says. "I didn't know my father very well, so it's difficult to talk about him. So that's my story. It's not a difficult story. It's just a story like everybody.”

Stromae's absentee father was Rwandan. When Stromae was a boy, his dad left the family in Belgium and went back to Rwanda. He was killed during that country's genocide in 1994.

Stromae writes about not having a father in his life in the song "Papaoutai," which translates as "Eh, Papa where are you?" The video is quirky, playing something like a children's book come to life. In it, a young boy vies for his father's attention, but the father, played by Stromae, is a lifeless mannequin.

That video's been viewed over 240 million times.

Stromae has sold millions of albums and performs to sell-out crowds. And with his groove coming from so many sources, there's something that will appeal to everyone.

"Africa is a big influence for me, but only through the European vision, of course," he says. "I went there only once. I know Africa through the music and through the African community in Brussels, but not the real Africa."

Who’s the best new artist you’ve seen in the past year?
Ask Facebook

But he still says "it was important for me to talk about those roots that I have, and it's so obvious to mix all those influences: hip-hop music, French folk music, African music, Congolese Rumba. So that's different kind of music that I wanted to mix together.”

Another video that grabbed the public's attention is for his song "Formidable." The video for this track plays like Candid Camera, with Stromae stumbling around the streets of Brussels yelling and acting drunk. The police at one point stop him to ask him if he's okay.

And that video? Over 100 million views.